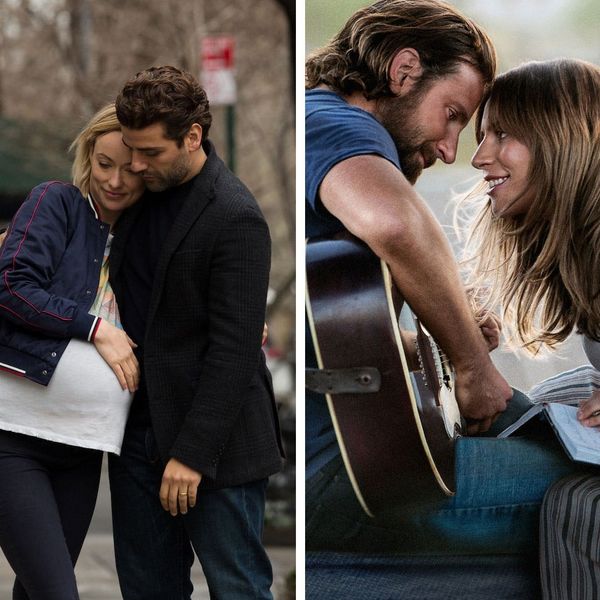 As the film industry eases out of summer blockbuster territory and into awards season, a whole slate of long-awaited new releases are set to hit theaters. From Oscar-baiting epics to timely dramas and, of course, feel-good family flicks for the holidays, here are the many movies you'll want to keep in your calendar for the final months of 2018. (Photos via Tatum Mangus/Annapurna Pictures + Jose Haro/Amazon Studios + Neal Preston/Warner Bros. Pictures + Daniel McFadden/Universal Pictures)

Life Itself (September 21): If you love This Is Us, mark this one on your calendar as a must-see. The creator of your favorite NBC drama made an intertwined and intergenerational family drama for the big screen, and it has an all-star cast including Olivia Wilde, Oscar Isaac, Annette Bening, Antonio Banderas, Mandy Patinkin, and more. (Photo via Jose Haro/Amazon Studios)

Love, Gilda (September 21): Saturday Night Live great Gilda Radner influenced an entire generation of comedians, and this documentary chronicling her life and career — featuring appearances from many of those she inspired, such as Amy Poehler and Melissa McCarthy — is sure to be a joyful tearjerker. (Photo via Magnolia Pictures)

Night School (September 28): Comedy powerhouses Kevin Hart and Tiffany Haddish are teaming up for this sure-to-be hilarious comedy about a group of so-called misfits who are forced to attend evening classes in the hopes of passing the GED exam. It was directed by Malcolm D. Lee, who also helmed the 2017 smash hit (and Haddish breakout vehicle) Girls Trip. (Photo via Eli Joshua Ade/Universal Pictures)

A Star Is Born (October 5): A Star Is Born might be one of the most anticipated films of the year, and after a blockbuster preview showing at the Toronto International Film Festival in September, it's all but guaranteed to feature prominently in the Oscar race — with likely Best Actor and Actress nods for Bradley Cooper and Lady Gaga. (Photo via Neal Preston/Warner Bros. Pictures)

Venom (October 5): Tom Hardy will step into the role of the Marvel character Venom, AKA Eddie Brock, who, after coming into contact with an alien, receives potentially deadly superpowers. Michelle Williams and Riz Ahmed also star. (Photo via Frank Masi/Sony Pictures)

First Man (October 12): Ryan Gosling reunited with La La Land director Damien Chazelle for another likely Oscar contender based on the book First Man: The Life of Neil A. Armstrong. Will any space movie ever be as good as Apollo 13? Probably not, but if First Man's reception at TIFF 2018 is any indication, this is likely to be a hit anyway. (Photo via Daniel McFadden/Universal Pictures)

Beautiful Boy (October 12): Based on memoirs from a real-life father and son, Beautiful Boy tells the story of Nic (Timothee Chalamet), who is struggling with meth and heroin addictions, his father David Sheff (Carell), and a family's attempt to save their son despite the helplessness they feel. Devastating but ultimately hopeful, it's likely to gain some best-acting Oscar traction as well. (Photo via Amazon Studios)

Serenity (October 19): Matthew McConaughey plays a fishing boat captain who, after meeting an unreal-seeming glamorous woman (Anne Hathaway) on the small Caribbean island he calls home, is forced to contend with his mysterious past. (Photo via Graham Bartholomew/Aviron Pictures)

Can You Ever Forgive Me (October 19): Melissa McCarthy gets serious in this true story about Lee Israel, a writer who forged letters from dead celebrities when her literary career began to plummet. (Photo via Mary Cybulski/Twentieth Century Fox Films)

The Hate U Give (October 19): Based on author Angie Thomas' bestselling YA novel of the same name, The Hate U Give follows 16-year-old Starr Carter, whose unarmed best friend Khalil is fatally shot by a police officer. It's a breakout role for Amandla Stenberg (The Hunger Games) stars in what's sure to be a gripping and too timely film. (Photo via Twentieth Century Fox Films)

What They Had (October 19): Hilary Swank stars in what's sure to be a cathartic drama about a family who must convince their father to place his lifelong love, his wife, in a nursing home as a result of her worsening Alzheimer's. (Photo via Bleecker Street)

Bohemian Rhapsody (November 2): After a tumultuous few months of production hiccups following the firing of director Bryan Singer over what was said to be poor attendance and behavior on set, the Rami Malek-starring Queen biopic will finally be released in November. (Photo via Alex Bailey/Twentieth Century Fox Films)

Nobody's Fool (November 2): Tyler Perry's latest comedy stars Tiffany Haddish as a just-released convict who's trying to help her sister Danica (Tika Sumpter) figure out if her online boyfriend has been catfishing her. (Photo via Paramount Pictures)

Suspiria (November 2): This remake of the 1977 horror movie features a stellar ensemble cast, including Dakota Johnson, Chloë Grace Moretz, Tilda Swinton, Mia Goth, Lutz Ebersdorf, and the lead star from the original film, Jessica Harper. It follows the students of a world-renowned dance company — and the darkness that lurks behind the scenes. (Photo via Amazon Studios)

Dr. Seuss's The Grinch (November 9): The third screen adaptation of Dr. Seuss' 1957 classic How the Grinch Stole Christmas! is animated and in 3-D, with Benedict Cumberbatch as the Grinch and Ariel Winter as his inadvertent foil Cindy Lou Who. (Photo via Illumination/Universal Pictures)

The Girl in the Spider’s Web (November 9): Claire Foy stars as Lisbeth Salander (previously played by Rooney Mara) in the long-awaited sequel to David Fincher's The Girl With the Dragon Tattoo. (Photo via Reiner Bajo/Sony Pictures)

Fantastic Beasts: The Crimes of Grindelwald (November 16): The sequel to the 2016 smash hit movie starring Eddie Redmayne is finally here, and if early trailers are any indication, it's going to be just as magical as the original. Jude Law, Zoë Kravitz, and Ezra Miller also star, as does Johnny Depp, despite controversy calling for his firing. (Photo via Jaap Buitendijk/Warner Bros. Pictures)

Widows (November 16): Viola Davis stars as the emergent ringleader of an unlikely group of women who band together to pull off a major heist in order to finish their dead husbands' business. (Photo via Merrick Morton/Twentieth Century Fox Film)

Instant Family (November 16): Mark Wahlberg and Rose Byrne star in this Sean Anders comedy as a couple who go from zero to 100 in — you guessed it — an instant, when they adopt three children at the same time. (Photo via Paramount Pictures)

Creed II (November 21): In the eighth installment in the Rocky film series and the sequel to 2015's Creed, Michael B. Jordan once again stars as Adonis "Donnie" Creed. This time around, he's training for the fight of a lifetime against Ivan Drago, the man who killed his father in the ring more than 30 years earlier. (Photo via Barry Wetcher/Metro Goldwyn Mayer Pictures/Warner Bros. Pictures)

Ralph Breaks the Internet (November 21): When Ralph (John C. Reilly) and his friend Vanellope von Schweetz (Sarah Silverman) discover that their arcade is hooked up to the internet, they have to contend with all the distractions and clutter contained therein. The film almost "broke the internet" earlier this summer when it released its first look at a scene featuring every Disney princess, together. (Photo via Walt Disney Studios)

If Beale Street Could Talk (November 30): Director Barry Jenkins returns to the big screen two years after his stunning film Moonlight snagged the Best Picture Oscar in 2017, the year of the awards show's biggest mixup ever. If Beale Street Could Talk follows an African-American woman working to clear the name of her wrongly-convicted husband while she's expecting their first child, and early buzz suggests that the movie is likely to follow in Moonlight's critically acclaimed footsteps. (Photo via Tatum Mangus/Annapurna Pictures)

Mary, Queen of Scots (December 7): Saoirse Ronan stars as the eponymous Mary opposite Margot Robbie as her distant cousin, Queen Elizabeth I, in this film following the life and rivalry of the young women. (Photo via Parisa Tag/Focus Features)

Mary Poppins Returns (December 19): The sequel to the classic 1964 Disney film sees Mary Poppins (Emily Blunt) revisiting the Banks children 25 years after their initial meeting to once again bring joy back to their lives. Have you seen the trailer? It looks downright MAGICAL, and just in time for the holidays, to boot. (Photo via Walt Disney Studios)

Bumblebee (December 21): The live-action Transformers franchise continues with the sixth installment, which serves as a prequel to 2007's Transformers. The film takes place back in 1987, when teenager Charlie Watson (Hailee Steinfeld) discovers the beloved yellow Autobot Bumblebee and takes him in, only to then be hunted by the government agency Sector 7. John Cena and Pamela Adlon also star. (Photo via Jamie Trueblood/Paramount Pictures)

On the Basis of Sex (December 25): After a buzzworthy documentary on US Supreme Court Justice Ruth Bader Ginsburg made headlines in the spring, a new feature-film biopic starring Felicity Jones is set to deliver an inspiring look at Ginsburg's fight for gender equality. (Photo via Jonathan Wenk/Focus Features)

What movie are you most looking forward to in the second half of 2018? Let us know @BritandCo!