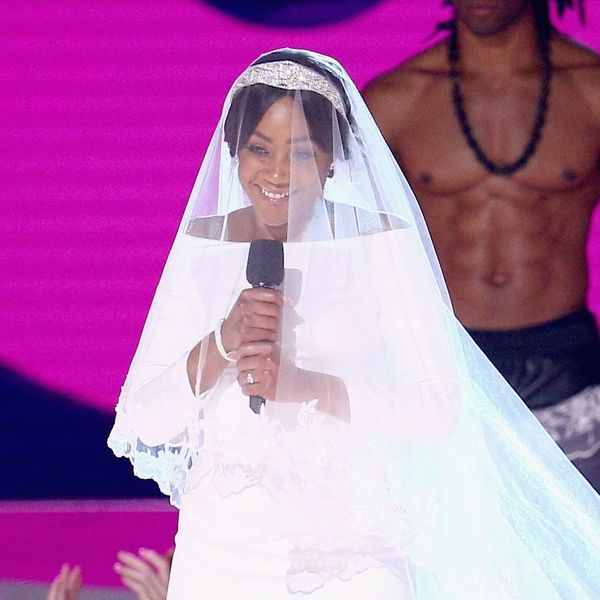 MTV's awards shows are some of the most lively, memorable events every year, and the 2018 MTV Movie & TV Awards were no exception. From surprise moments onstage to host Tiffany Haddish's nonstop hilarity, here are seven of the biggest moments from the June 18 telecast. (Photos via Rich Fury/Getty Images + Kevin Winter/Getty Images for MTV)
Tiffany Haddish's many antics and costume changes: Everything this woman did was comedic gold — but what else is new?! Her outfits ranged from *that* Alexander McQueen gown to Meghan Markle's wedding look to Cardi B's SNL pregnancy reveal frock (Haddish said she got pregnant just by looking at Michael B. Jordan), but when it came time to accept her award for Best Comedic Performance, she rocked a bathrobe instead. Classic. (Photo via Rich Fury/Getty Images)
Chadwick Boseman's surprise tribute: When Boseman accepted the Best Hero award for Black Panther, he gave it to a real-life hero in the audience. "Receiving an award for playing a superhero is amazing, but it's even greater to acknowledge the heroes that we have in real life. So I just want to acknowledge somebody that's here today," he said. He then called James Shaw Jr. — who fought off a gunman in an Antioch, Tennessee, waffle house earlier this year — to the stage, and gave the award to him. Yeah, we're crying too. (Photo via Kevin Winter/Getty Images for MTV)
Millie Bobby Brown's anti-bullying PSA: Due to a split kneecap, the Stranger Things star wasn't on hand to accept her Best Performance in a Show award, but she appeared via video and used her speech to call out bullying in the wake of her reported decision to leave Twitter due to harassment. "If you don’t have anything nice to say, just don't say it," she said. "There should be no space in this world for bullying, and I'm not going to tolerate it." (Photo via Taylor Hill/FilmMagic)
Chris Pratt's life lessons: The Jurassic World star was the recipient of the Generation Award this year, and he took the opportunity to share some wise life lessons with the young people in the audience. His advice started with a reminder to breathe, nurture your own soul, and not "be a turd." He also joked about how to feed medicine to a dog and how to poop at a party before continuing to preach the power of hard work and kindness. His final bit of wisdom? "Nobody's perfect." (Photo via Kevin Winter/Getty Images for MTV)
Lady Gaga's surprise appearance: Gaga's Five Foot Two documentary nabbed the prize for Best Music Documentary, and as clips from the film played, Gaga walked onstage to be handed the trophy by Haddish. She then went on to award the Best Movie prize to Black Panther. (Photo via Kevin Winter/Getty Images for MTV)
Michael B. Jordan's Roseanne joke: Accepting the award for Best Villain for Black Panther, Jordan joked that he "thought Roseanne had this in the bag," referring to the comedian's recent racist tweet that led to the cancellation of her revived Roseanne sitcom. (Photo via Kevin Winter/Getty Images for MTV)
Lena Waithe's trailblazing win: It's been a whirlwind couple of years for Waithe, who made Emmys history in 2017 and continues to turn heads with her groundbreaking work. The Chi creator paid tribute to other trailblazers in her speech for the MTV Trailblazer Award, urging viewers to seek out more diverse voices. (Photo via Rich Fury/Getty Images)
Nicole Villeneuve
Nicole is an entertainment and lifestyle writer covering pop culture, news, and cool women doing cool things. She likes yard sales, MTV's Teen Mom, and putting too many memes in the group chat. She lives in Toronto.
Awards Shows
Pop Culture
Awards Shows Movies TV
More From Pop Culture