THIS Will Be the Biggest Engagement Ring Trend of 2018 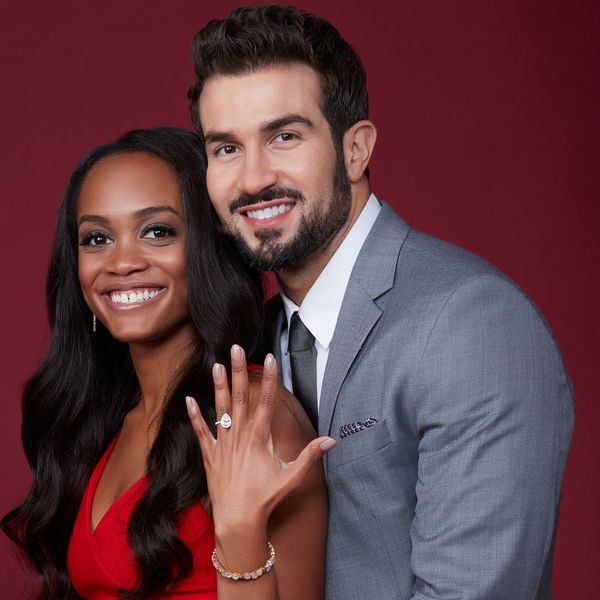 With so many celebrity engagements in 2017, we’ve seen a LOT of gorgeous rocks, but one shape, in particular, keeps popping up time and time again: the pear-shaped diamond. Hey, sometimes, you’ve gotta go back to the classics, ya know? Though plenty of famous women have donned pear-cut diamonds over the years — including Victoria Beckham and Jessica Simpson, who both sealed the deal with the elegant, quintessential cut — 2018 is quickly shaping up to be the year of the pear. So popular, in fact, is the fruit-named rock, that Paris Hilton even made a joke about twinning with rapper Cardi B, who received a similar stone to Hilton’s back in October. “Our future hubbies obviously both have amazing and similar taste!” she wrote.

Check out who else is rocking the stunning diamond below!

1. Rachel Lindsay: The Bachelorette beauty sealed the deal with Bryan Abasolo last summer with a jaw-dropping ring by jeweler-to-the-stars, Neil Lane. The designer described the stunning piece on Instagram as a “3-carat platinum ring set within a halo of smaller diamonds and further accented with 80 round diamonds,” and TBH, we’re STILL not over how beautiful it is.

2. Cardi B: The “Bodak Yellow” queen was proposed to by her future king, rapper Offset of Migos, onstage last fall, and while it was one of the sweetest proposals ever, it was the truly massive ring he gifted her with that had our jaws on the floor: Get a load of this eight-carat platinum stunner!

3.Kaley Cuoco: We were so thrilled when the Big Bang Theory actress announced her engagement to equestrian Karl Cook, and even more thrilled to see the pear-shaped bauble he chose from Los Angeles-based jeweler Nadis Diamonds — swoon!

4. Sophie Turner: The Game of Thrones star announced her engagement to her longtime boyfriend, singer Joe Jonas, by sharing a breathtaking shot of their hands on Instagram last October, which showed off the pretty pear style. The ring sits pretty on a pavé-studded double band and cost a reported $150,000.

5. Paris Hilton: The heiress celebrated her engagement to her longtime love, actor Chris Zylka, by showing off a massive engagement ring fit only for a princess like Paris! Zylka designed the $2 million stunner himself based on one her mother wore (aww!), and from the sounds of it, the pear-shaped ring is exactly what the 36-year-old was hoping for. “The ring was so gorgeous and sparkling,” she told People. “I was shaking as I put it on. It is the most beautiful ring that I have ever seen!”

Do you love a pear-shaped diamond? Share with us @BritandCo.

Arielle Tschinkel
Arielle Tschinkel is a pop culture junkie who went to NYU because the Olsen twins went to NYU (really). She is a freelance writer whose work has also been featured on HelloGiggles, Refinery29, SheKnows, Bustle, Hollywood.com, and many others; and she's living her dream one Britney Spears GIF at a time. Follow her on Twitter @mrstschinkel or visit her website at arielletschinkel.com.
Wedding Style