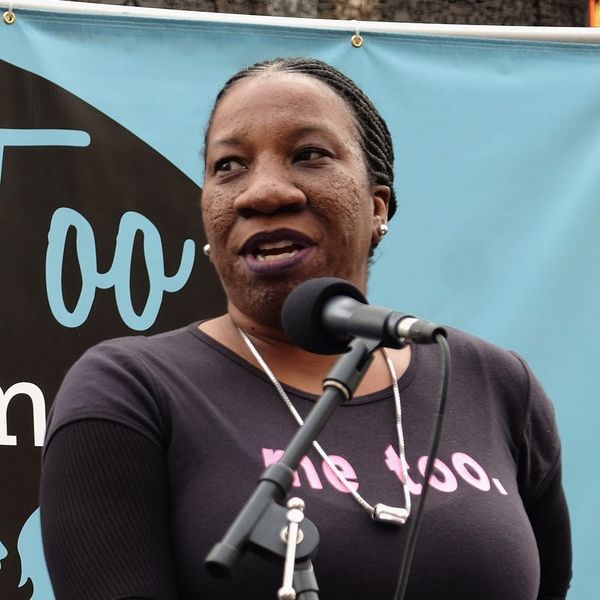 There are two kinds of people in the world: Those who respond to despair with discouragement and those who are motivated by it. To leverage the heaviness of oppression for positive social change isn’t second nature to many, especially in an admittedly grim political landscape. But if there was ever an opportunity for the marginalized—particularly women, and women of color—to rise up and stir hope through their passion, gifts, and grit, it was this year.

2017 held the potential for all of us to become and remain discouraged, but thanks to the leaders of the #resistance—women who have defied cultural norms and expectations by taking the reins of positive social change at the grassroots level, and beyond—we’ve seen some light. Let the strong, powerful women behind these important (read: world-changing) social movements inspire you to do good in your own way this year, wherever you are and whatever you may be facing.

Turns out there’s safety—and a profound possibility for social change—in numbers. Though activist Tarana Burke started the “Me Too” Movement in 2006 to empower women who had been sexually assaulted or harassed, it exploded earlier this year when allegations of sexual misconduct in Hollywood began to surface. Thanks to Burke’s boldness, thousands of brave women have since banded together to share their own personal experiences both on and offline, evolving what started as a simple hashtag into a full-blown movement, provoking empathy and understanding across cultural divides, and ultimately catalyzing a larger conversation on feminism. Currently, Burke is in the process of creating a documentary entitled Me Too, which is due to come out in 2018 (we can’t wait). (Photo by Sarah Morris/Getty)

The well-deserved recipient of BET’s Shine a Light Reward in 2017, Tamika Mallory is perhaps known most commonly for her work as national co-chair of the Women’s March in January 2017, which mobilized millions of women around the country in defense of human and civil rights in a time of political and cultural unrest. But that was just the beginning of Mallory’s role in the resistance. More than just a one-time event, Mallory says this year’s march was a catalyst for a broader movement that will equip women activists for conversations on social issues like racism and sexism, namely through the inaugural Women’s Convention in Detroit last October. Mallory also made incredible headway in her gun reform efforts this year when she launched her #NRA2DOJ project, an anti-NRA protest that included a march from the NRA to the Department of Justice in 2017. (Photo by David Goldman/Getty)

Okay someone tagged me in this picture of a #bethebridge group and I would like to know more details about the group... city, leader and how long you’ve met. If this is your group please inbox me or comment below! 🤣❤️

Tasha Morrison, Founder of Be The Bridge

When Tasha Morrison gathered a group of diverse women for a conversation on racial reconciliation, she didn’t expect to end up leading a non-profit organization. But the response to her mission after she spoke at a women’s conference on the importance of building bridges between races was overwhelming.

Be The Bridge, Morrison’s nonprofit, creates resources and fosters community focused on creating healthy dialogues about race and racialization in the U.S., with an emphasis on promoting understanding about racial disparities and injustices. Through a small group workbook she wrote and a growing Facebook community of nearly 16,000 women, Morrison has blazed a trail of unity amidst diversity in an otherwise disparaging climate. This year alone, her Facebook group was chosen for the Facebook Community Summit in Chicago, and Morrison was recognized as one of Ebony’s Power 100 in the Community Crusaders category.

Mood. In other words: EVIDENCE BASED VULNERABLE FETUS SCIENCE BASED TRANSGENDER DIVERSITY ENTITLEMENT. Can’t stop thinking about And saying all these words for some reason. So weird.

During a difficult (okay, very difficult) year, blogger and author Glennon Doyle has dedicated her social media platform to empowering hurting families and communities in a simple but effective way: by empowering the women that belong to them. Together Rising, a nonprofit powerhouse that believes there’s no such thing as other people’s children, exists to heal the world, one her at a time through practical support and general encouragement for mothers and their children.

Since 2012, Glennon and Together Rising have raised more than $8 million, mostly through its (admittedly inspiring) crowdfunding efforts. And last June, in the wake of President Trump’s decidedly anti-immigrant rhetoric and legislation, Together Rising devoted their energy and resources to refugees, raising more than $50,000 for displaced families in Europe and Syria.

Remember the stunning illustration of a woman wearing the American flag as a hijab? That’s Munira Ahmed, a freelance interpreter from New York whose face remains the visual symbol of this year’s resistance protests. As a Muslim woman, Ahmed says she frequently faces racism, but that didn’t stop her from carrying her resistance message at both the Inauguration Day March and the Women’s March this year (although she wasn’t expecting her photo to become—well, viral).

The image, illustrated by Shepard Fairey in the same simple, ink-block style as his Obama “HOPE” poster, has become a powerful symbol of standing one’s ground in the face of oppression—even during the difficult straddling of two very marginalized identities.

Which women of the resistance inspired you in 2017? Tell us at @BritandCo.