5 Reasons to Bring Your Baby to the Movies, and 1 Not To 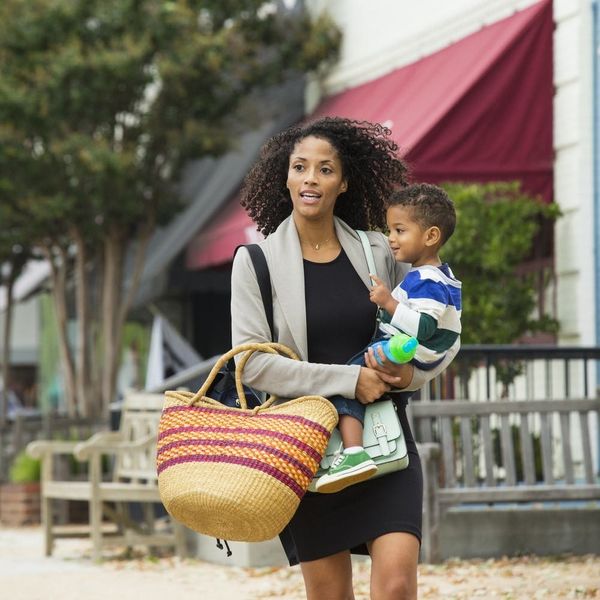 Your Netflix binge list is empty. You’re so very done with hitting that “Yes, I’m still watching” button from your couch, and you’re really, really ready for a night (or, at least an afternoon) out. But the sitter just canceled. Your date night just went from dinner and a movie to brainstorming gift ideas for your The Walking Dead-obsessed BFF while you rewatch the sixth season for the 12th time. Or you could just bring baby along with you. Before you pack up that cute diaper bag and head out to see the latest soon-to-be Academy Award nominee, check out these reasons why it’s okay to take baby to the movies (oh yeah, and one major reason not to).

1. You find a baby-day matinee. Yes, this is really a “thing.” Some theaters have special baby showings — just for moms, dads, other caregivers and babies (or very young children). Unlike a regular show, this one typically features a low-key movie (in other words, no loud explosions or anything else that would jar a sleeping baby into wailing tears) and lots of other adults with their own possibly cranky children. This means that your baby’s sudden bout of fussiness won’t irritate, aggravate or in any way otherwise annoy the other patrons.

2. You have a never-wake-up napper. It’s like clockwork: Every afternoon at 2pm your little one goes down for the count. They snooze away for at least two hours and rarely wake. If you have a mega-napper, you may be able to get away with toting them along to a movie. As long as you time it right, bringing them to a movie may pose few problems. That said, keep the baby-day matinee rules in play: Pick a film that won’t wake your baby, which means ruling out anything that’s too action-y. Films with car chases, explosions, gunfire or galaxy-wide battle scenes are def a no-go.

3. There’s a family film fest. The newest animated kid flick is out, and the theaters are packed. Perfect for you, mama. What with the constant chatter of precocious preschoolers, the toddler tirades and the random tantrums, no one will notice when your baby starts crying. Okay, so maybe the woman sitting directly behind you might, but she’ll stop complaining the second her four-year-old starts kicking the back of your seat.

4. You deserve to treat yourself to an out-of-date date night. You were desperate to see the latest Hemsworth film when it came out. You aren’t even sure which Hemsworth is the star (um, the cute one… or ones?). You’ve been busy with your newborn, and now it’s been weeks — or months — since the movie opened. Perfect! Everyone who wanted to see the movie in the theater already has, and the rest of the want-to-be viewers are waiting to stream it to their living rooms. Since you’ll pretty much have the theater to yourself, why not bring baby along?

5. The theater will be empty anyway. Even if the movie hasn’t been out for what seems like ever, you can still find a time when the theater will be mostly empty. Midafternoon on a perfectly sunny day, a 10am show (who sees a movie at 10 in the morning anyway?) or during the workday are all times when the theaters aren’t hugely full. That means there are fewer people around you to worry about!

And one reason not to take your baby to the movies…

1. You’re exhausted. You may have gotten a quick 15 minutes of sleep in somewhere around 4am. Now isn’t the time to see a movie. The moment those lights go down, your eyes will close. That is, until baby wakes you up — in the middle of a movie theater, no less. Instead of pushing yourself to go out, use those two hours to take a nap. A fussy baby? You can deal. Crying? Yep, you’re used to it. But sleep? Sleep is precious!

Would you take your baby to a movie? Share your answer with us @BritandCo!

Erica Loop
Erica Loop is a freelance writer living in Pittsburgh. When she's not busy creating kids' activities for her blog Mini Monets and Mommies, you can find her trying to hang out with her teenage son, being chased by her two Olde Boston Bulldogs or teaching a children's karate class (she's a third degree black belt!).
New Moms
Parenting
New Moms
More From Parenting