5 Ways to Recover from Making a Mistake at Work 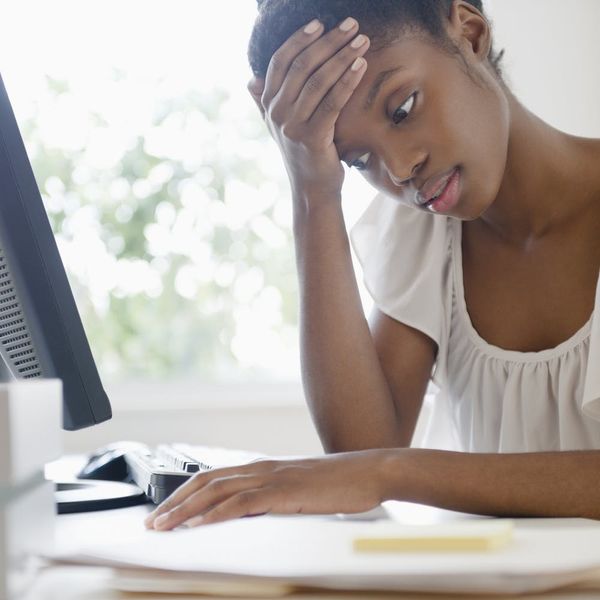 Mistakes — especially at work — happen. Whether you flubbed an ultra-important video interview, sent an email to the wrong person, or said something that’ll make it hard for people to take you seriously going forward, there’s a good chance you broke into a sweat and hoped the floor would open up and swallow you. But since unintentional missteps inevitably happen to the best of us, knowing how to deal is key for saving face and moving forward. We hit up a handful of #girlbosses to get their tips about exactly what to do when you make a mistake. Read on for five anxiety-easing tips.

1. Own up to it ASAP. “Own up to your mistake immediately and be as transparent as possible,” Jia Wertz from Studio 15 advises. “People respond to honesty and can totally relate to the human nature of making mistakes; we’ve all been there.” She reminds us that even though a mistake can feel like the end of the world at the time, taking responsibility and discussing it will help ease anxiety immediately. “Healthy communication and a genuine apology are key,” she says.

2. Get some perspective. Julie Fajgenbaum, founder and CEO of Tweed Wolf, says, “Once I’ve made a mistake, I immediately put it into perspective to help frame my anxiety and time to spend fixing it. I ask myself: ‘Is everyone healthy and safe?’ [and] ‘Will my mistake still matter next week, next year, or in the next decade?'” She wraps up her process with a “solution check ” to figure out exactly how to own her mistake, fix it, and prevent it from happening again. Brilliant.

3. Commit to improvement. Stephanie Newman, founder of the feminist media website Writing on Glass, tells us that she’s learned to embrace mistakes by committing to improvement. “Once, I [shared my website with] an industry leader who I thought would appreciate my effort — but she told me that though I said my platform was inclusive, it actually mostly included links to white, straight women.” Confessing her total embarrassment, Newman says, “I knew she was right and it had been so subconscious, even while I was consciously trying to avoid the exact situation. So I said ‘thank you’ and committed to doing better next time. I now thank people who call me out because it’s a huge favor.”

Growth Coach and Business Mentor Silvia Christmann agrees. “I call making mistakes the art of falling forward,” she says. “Remember that the path to success is paved with bricks of failure.” She tells us to remember that mistakes definitely don’t make *you* a failure though. “You can’t push the envelope, grow, or innovate without them.” What an awesome perspective!

4. Learn and grow. “I’ve always loved working in environments where mistakes or failure are actually progress, because we’ve learned something about what works (or doesn’t) and can move forward,” Danya Shults, the founder of Arq, explains. “I think of everything new I try for Arq as an experiment, and it either succeeds or fails, but either answer is a positive step forward. When something I try doesn’t work, I name it and acknowledge it, I figure out what went wrong and what needs to happen next time for it to work (or hopefully work), and then I give it another go.” Right on.

“Honestly, I don’t know if I believe in mistakes,” says Jelena Aleksich, Graphic Designer and founder of The Confetti Project. “I think mistakes are these beautiful opportunities in finding our greatest lessons. So, welcome them and be kind to yourself. Think about what you’ve learned and how you can grow; the less you internalize it, the more space you can dedicate to finding a solution.”

5. Seize an opportunity. “I think the biggest thing you can remember is you are not your mistake,” says Danielle Rothman, founder of Rothbyrns Creative. “Depending on the size of the mistake, people might not even notice; if it is a big deal, consider what you can do to fix it — this could even benefit you long-term.” To illustrate her point, Rothman shares an anecdote. “I got an email today from a company’s CEO apologizing that a link to a sale was deactivated, and to tell the customer that the sale was extended to compensate for it. I really appreciated his transparency and feel more loyal to the company because of his apology.” Even more reason to keep a clear head so you can see if there might actually be an opportunity in your error.

How do you deal when you make a mistake? Tell us on Twitter @BritandCo so we can share your tips!

Krista Gray
Krista Gray is a web producer and freelance writer who lives in San Francisco. When she's not working with clients through her company GoldSquare, she loves reading, traveling, and learning new things.
Adulting
Work
Adulting Girlboss work
More From Work