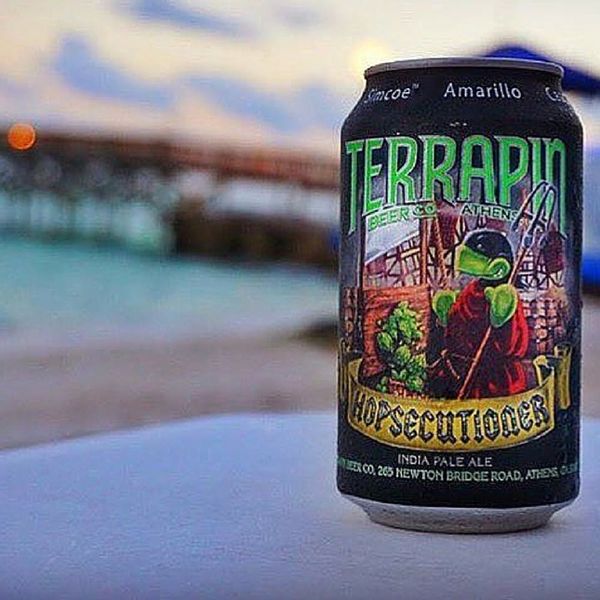 If you’re like us, you’ve been loving watching the summer Olympics, and wanting to cheer on TeamUSA with friends is such an awesome excuse to invite them over for a super fun Olympics viewing party. But when you’re getting together in hopes of going for gold, your beverage choice has to be just as superior. Which is why we rounded up eight of our favorite craft breweries from around the country, perfect for sipping on while you chant U-S-A!

1. Oskar Blues Brewery: This funky Colorado-born brew-pub is quickly growing in popularity. With their headquarters in Colorado, the team also has a spot in Brevard, NC and another one very recently opened in Austin, TX. They’re the leaders in doing craft beer in cans, making them easier to toss in a cooler or bucket for guests to enjoy. Plus, their flagship brew, Dale’s Pale Ale, is patriotically packaged in red, white and blue — perfect for your opening ceremony party.

2. 14th Star Brewing Co.: This Vermont-based brewery was dreamed up by a group of soldiers while stationed in East Afghanistan. Does it get more patriotic than that? We didn’t think so. Stock up on their flagship beer, Valor Ale, an easy-to-drink hoppy ale, and they’ll donate a portion of the proceeds to the Purple Heart Reunited Foundation. Celebrating our country and supporting our veterans sounds like a win/win to us.

3. Columbus Brewing Company: This brewery, situated in the heart of it all, calls Ohio’s capital home and crafts seriously delicious and inspiring brews. Pick up their Double India Pale Ale, Bodhi, now being bottled. It won bronze for Great American IPA at the 2014 Great American Beer Festival, so enjoying a glass might just send good vibes to our own athletes competing to take home a medal of their own.

4. Terrapin Brewing Co.: It’s a classic American business story. Two guys meet working at a microbrewery, realize they can do something a little crazier and set off on a startup journey to make it for themselves. Almost 15 years later, they’ve turned Terrapin into one of the most popular breweries in the Southeast, picking up accolades and awards along the way. From their original Rye Pale Ale to their funkier Liquid Bliss, you can’t go wrong.

5. 21st Amendment Brewery: If you’re going to name your brewery after the amendment that repealed prohibition, you have to bring the heat. And that‘s exactly what 21st Amendment does. Try the Hell or High Watermelon, their summer seasonal only available from April to September, for a fruity twist on a classic American wheat beer. Plus, the brewery is a multiple-winner at the World Beer Cup, so it knows a thing or two about winning.

6. Rogue Ales & Spirits: When words like revolution and rogue are in your DNA, you know you’re drinking the American spirit. Founded in the late-80s, you can find a Rogue brewpub in Oregon and Newport and their beer everywhere in between. They have more than 30 beers to choose from, but keep it classic and stick with their American Amber Ale for your Olympic festivities.

7. Founders Brewing Co.: This Michigan-based brewery didn’t set out to quench the thirst of the masses. But that’s exactly what it did. Stock your fridge with their All Day IPA, a drinkable, hoppy beer with a low ABV that is sure to be a crowd-pleaser.

8. RJ Rockers: Founded by a Gulf War vet who was looking for a way to score free beer for like ever (my kinda guy), RJ Rocker’s is making a big splash in South Carolina’s Upstate. Check out their Palmetto Trail Ale, brewed in partnership with the Palmetto Conservation Foundation, whose mission is to finish the state’s only mountain to sea trail. Or stick with the summer theme and stock up on Son of a Peach, a delightful American Wheat Ale brewed with South Carolina-grown peaches. It doesn’t get more American than that.

Tag us in your Olympics party pics @BritandCo!

Kelsey Nelson
Kelsey Nelson is a born-and-raised Ohioan living life in South Carolina. She thrives at binge watching Netflix, contemplating what to order at the bar and running any trail or road she can get her feet on. In addition to being a Brit + Co contributor, she writes about southern pleasantries, DIY mishaps and more at North Living South. If she isn’t writing or running, she’s off adventuring with her husband Brad and their Lab/Dachshund mix, Gordy.
Olympics
Cocktails
Olympics
The Conversation
Reviews:
More From Cocktails