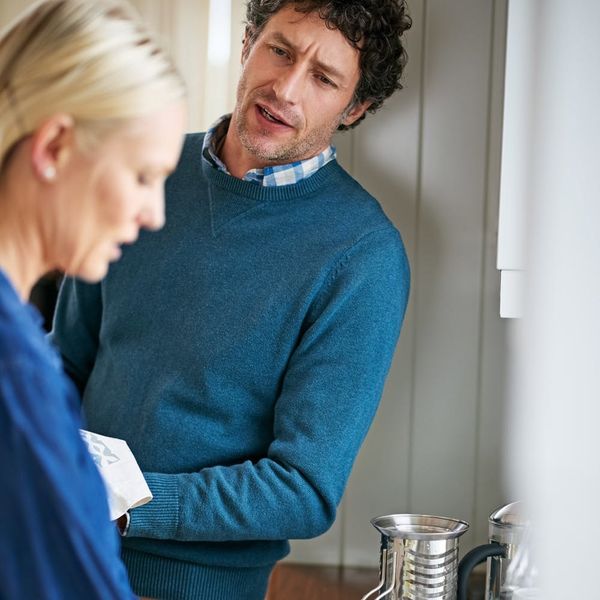 On Monday, the New York Times reported that while Americans are, by and large, accepting of and even happy with workplace gender equity, the gender division of at-home work is viewed quite differently.

The General Social Survey (a multi-generational study that started in 1977) found that while two-thirds of the general population (and three-quarters of millennials) are accepting of gender parity in the workplace, 25 percent of the population still feels that it’s important that women take on the bulk of other (read: unpaid) at-home work.

This “other” work — the cooking, cleaning, child rearing, and general household management often associated with stay-at-home parents — tends to fall on women’s shoulders, whether or not we’re working full time. That additional, often unacknowledged workload can add up to more than 100 hours of combined in and out-of-office work. The expectation that women take on this unpaid and socially undervalued work could be the main reason why the gender gap in career and compensation exists at all. It also means that, in terms of paid compensation for hours worked, said gap is probably much wider than we tend to acknowledge.

Stubborn perceptions of gender could be why our expectations of men and women’s roles are so different. According to a 2017 study on gender differences published by the Pew Center, even though more than 60 percent of Americans think men and women are equally capable at work, we believe that men and women are vastly different when it comes to emotional capability, physical strength, and even what our hobbies might be.

Though women (and most Democrats) surveyed said they understood that the pressures that women faced were more likely based on societal norms than biology, the men (and a majority of Republicans) surveyed said that it was a woman’s genetic makeup that created gender differences in housework, physicality, and general ability, even though science says otherwise.

“You can believe men and women have truly different natural tendencies and skills, that women are better nurturers and caretakers, and still believe women should have equal rights in the labor force,” Barbara Risman, a sociology professor at the University of Illinois at Chicago and one of the study’s authors, told the Times.

But this push for women to bear the bulk of the domestic workload could be at least one major cause of our persistent gender-correlated wage gap. Women are still paid, on average, 20 percent less than male counterparts, and the chasm only widens for women of color. And due to increasing child care costs and little to no social family support policies like mandatory paid parental leave, women are dropping out of the workforce in droves — a phenomenon that may be reinforcing stereotypes that women are best suited to at-home work, to begin with.

And lest you think that these issues are only facing middle- and low-income families, even women executives are expected to bear the brunt of the at-home-work from their male spouses. In an essay for Medium, Denise Duffield-Thomas, a financial coach and author, writes that her husband’s hesitancy to pull his weight around the house gave her little choice but to seek, and pay for, outside help in his place.

Even former First Lady Michelle Obama agrees that “having it all” is a myth, telling a crowd that the now-infamous Lean In mentality of Facebook’s COO Sheryl Sandberg, “doesn’t work all the time.” But if we’re not leaning in, and we can’t lean out, what can be done?

The World Economic Forum says the only way to close this gap is to get more women working, with more equitable pay, and have government supports in place for both child and senior care so that women can offload some of the care workload without fear of life crumbling around us. (Oh, and fellas: Pick up a damn broom.)

Kat Armstrong
Kat has been a writer, social media maven and mom for longer than she's willing to admit. She's also spent time in front of and behind the camera, interviewing celebs, politicians and acting as a producer for fashion and artistic photography shoots. When she isn't writing for various orgs and publications, she's hanging with her kids, husband and French Bulldog, Peter, in Toronto, Canada.
Controversy
Gender Issues
Controversy
More From Gender Issues