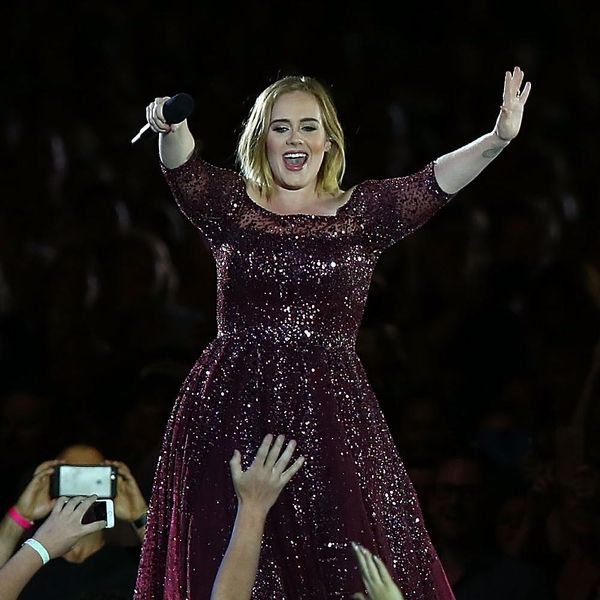 Adele’s life may seem like a vision board come true (wine, laughter, and a beloved pup, FTW!), but things aren’t always as they seem. We were already cringing over the fact that her son was hit in the eye with fireworks debris during a sound-check for her concert (ouch!), and now it turns out that Adele has been hiding herself in a box at her concerts. Seriously. And you’ll love the reason why.

If you’ve had your mind blown at one of Adele’s concerts lately, you’ll know that she performs on a circular stage set in the middle of the packed crowd. Wanting to make a dramatic entrance and not lose any of the magic of the show, she has to make her way to the stage without anyone seeing her. With no snazzy underground tunnels available, the singer’s team has come up with a simple (and pretty friggin’ hiliarious) solution.

Adele hides and rides in a box.

According to folks over at The Sun, a source has confirmed that the Grammy winner tucks herself into an equipment case that’s just big enough for her to sit inside of. When she’s settled, a few large fellas literally roll her out through the unsuspecting crowd. “Most of her fans are already seated and just presume it’s a piece of kit they are moving, but some have been told by staff at venues that actually it’s their idol and a woman worth £85 million sitting in a pretty small box a few feet from them.”

Though Adele’s team have refused to comment (natch), some clever folks have picked up on the sitch…

new season of Adele Rolling in the Box pic.twitter.com/WHX3zvMvdK

But if you thought you might be able to get a peek of Adele-in-a-box, take a look at the security sitch when she’s rolled out…

Did you have any idea that Adele is apparently rolled out to the stage in a box? Let us know @BritandCo!

Desiree O
Desirée O is a ‘Professional Bohemian’ who loves anything and everything related to the arts, entertainment, and pop culture. She ADORES being a ‘Newsy’ for Brit + Co, covering all of the latest tidbits of awesomeness that you want to read about. When she’s not writing, she’s either making messy art, going on long adventurous walks with her camera, or poking around over at bohemianizm (http://www.bohemianizm.com/). You can find out about Desirée O and her work at http://DesireeO.com/ or follow her on Twitter @DesireeO.
Music
Celebrity News
Music