I Tried an Airbnb Experience and It Was Totally Magical 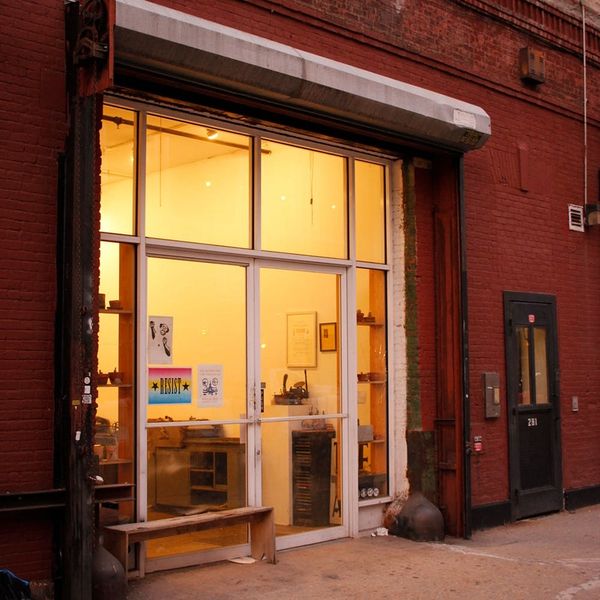 As I walked into Daniel Gardiner’s printshop The Arm, I immediately felt like I’d been transported to another world. Suddenly, I’d escaped uber-hipster Williamsburg and entered a magical, golden-lit workshop filled with worn wood, paint splatters, and decades-old printing presses.

I was there to visit Gardiner and to partake in Airbnb’s newest service: Airbnb Experiences. They are essentially local activities crafted and led by locals. Think: feminist-inspired walking tours, beekeeping workshops, and street dancing in the Bronx. The brand just celebrated the one-year launch of the addition, which is slowly being rolled out in a handful of cities. More recently, they unveiled a slew of experiences in all five boroughs of NYC.

As a relatively new New Yorker (I’m coming up on my one-year anniversary in the city), I decided to give one of the experiences a try to not only learn a new skill but to also discover a little more about my new home.

After introductions, Gardiner informed me that pizza was on its way and told me to help myself to a beer while we work. We popped open a couple of brewskies and he started showing me around the giant, somewhat intimidating machines.

As he taught me the fundamentals, Gardiner talked about living in Greenpoint with his family. His wife is pregnant and due at the end of the year and they need to find a new place to live. Naturally, we jumped into the one conversation you can always count on to unite 99 percent of New York residents: the impossible task of finding housing.

Amidst discussions about rent, raising a family in the city, and his family’s history as printers, I learned about the historic machines and how to use them. The mechanical elements of the press were strangely calming and hypnotizing to operate. Before I knew it, I’d set the base for far more prints than I’d actually be making.

Once I felt comfortable with the first steps of the process, Gardiner escorted me to another part of his workshop where I picked out block letters to create my own sign. I sat soaking in the zen of his workshop and all its foggy windows and house plants for longer than I really needed to. When I reentered the main space, both pizza and a mystery guest had arrived.

Turns out his name was Malcolm. He was in the middle of a story about running all the way to Queens in search of a cake he had to bring to a musician’s green room for work. Except, despite all his running around, the band didn’t actually eat the cake. “I cut myself a slice, because why not?” He told the room.

As we all dug into the pizza, Malcolm and Gardiner reminisced about Bob, the “iconic” delivery man who used to be a neighborhood staple before he passed.

I thought Malcolm was a late addition to the experience, but just as quick as he’d plopped himself down backwards in a chair, scarfed down a slice of pizza, and told us the saddest cake story I’d ever heard, he was gone.

I asked Gardiner who he was, almost wondering if I’d imagined him in the mystique of the workshop. He told me Malcolm stays in the loft above the workshop. He used to come around a lot and now he’s become a staple.

Malcolm’s guest appearance felt like the perfect compliment to the evening — another local coming in to casually talk about the neighborhood and share a few stories over a slice.

After we’d all shared a bite, Gardiner and I arranged my type on a press and after a little adjusting, I was off and rolling. Again, the smooth operation of the machine was oddly calming and before I knew it, I’d made almost 20 prints, all of which read “Adventurous Women Do.”

Gardiner told me I could write anything I wanted to except “Keep calm and [fill in the blank].” Fair enough.

He let me take all my prints home. I gently wrapped them all up individually so that they’d safely make the journey when I crossed back over into the real world. After just two hours in Gardiner’s space, I left totally refreshed and with a new, cozy memory of a magical evening spent sipping beers, eating pizza, and making art in a workshop in Williamsburg.

To learn more about Airbnb experiences offered in your neighborhood or somewhere you’re traveling head here.

Cortney Clift
Cortney is the senior writer and special projects editor at Brit + Co. She typically covers topics related to women's issues, politics, and lifestyle. When she's not buried behind her computer you'll find her exploring New York City or planning her next big adventure.
Airbnb
Travel
Airbnb