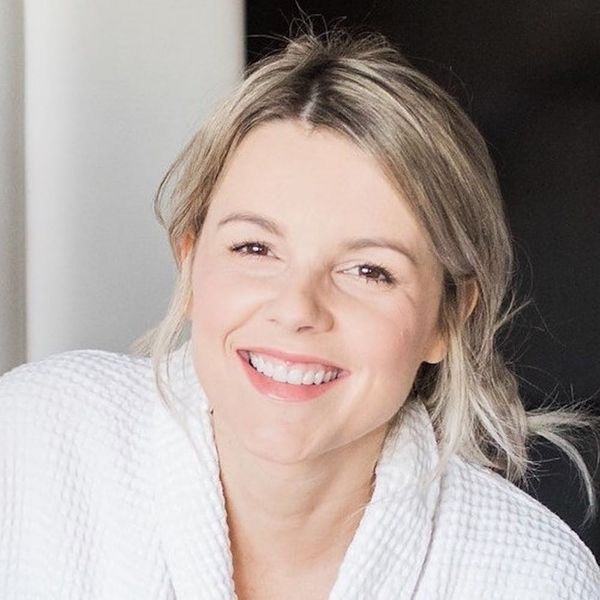 Christmas may be just around the corner for the rest of the world, but it’s come early for Ali Fedotowsky-Manno! The former Bacheloretteannounced her second pregnancy with husband Kevin Manno just last month, and before she knows it, she’ll be a mom of two.

Molly is clearly thrilled about being a big sister! 😂 And Owen is crying for help! 😆 And I’m slightly freaking out but trying to keep it together. 😉 You guys have been asking about how my 1st trimester of pregnancy was. So I’m sharing my 1st trimester journal on the blog today. The good, the bad and the ugly. It feels good to finally be able to talk about it. www.AliLuvs.com #linkinbio #1sttrimester #firsttrimester #firsttrimesterproblems #AliLuvs #BabyManno

“That blows my mind,” she tells Brit + Co over the phone. Joking that in many ways she still feels like a teenage girl belting out Britney Spears (us too, girl, us too), she marvels at where she’s ended up in life. “When did this happen?” she asks.

Indeed, much has changed for Fedotowsky-Manno in the seven years she’s been in the public eye, first as a contestant on season 14 of The Bachelor, and then as the star of The Bachelorette season 6. She’s married, for one, having tied the knot back in March, and she’s a mom, after welcoming a baby girl named Molly Manno in July 2016.

Now she’s gearing up to do it all over again, though she tells us it’s been slightly easier this time around. “The second time is so much better in terms of morning sickness,” the 33-year-old, who suffered severe nausea during her first pregnancy, shares. “[During the] first trimester, it wasn’t so much being sick as it was having intense food aversions.”

Unfortunately for husband Kevin, one of those aversions just so happened to be… his lunch. “He likes these microwavable bowls that are really strong-smelling,” she says. “I would have [him] go outside and eat them!” (They do live in LA, after all).

It’s one of many sweet gestures he’s made for her, Fedotowsky-Manno says. As he did when she was pregnant with Molly, he makes (or buys) nutrient-packed smoothies for her every day. And he’s taken on the role of super dad on the days she does feel under the weather. “He has 100 percent taken over,” she says, adding, “I’m so lucky. He’s so good to me.”

Judging by her happiness, the upcoming Bachelor, Arie Luyendyk Jr., could surely use some words of wisdom from his predecessor in the love department, and she definitely has a few pearls to share. While the reality alum notes that she can’t exactly give him much guidance with regard to the show, as it’s already been filmed, she DOES have some advice for Luyendyk Jr. after his experience is all said and done. “I think he kind of just needs to drown out all of the cameras and [the] spotlight and really focus on what life has been like the last five years [after all of] the fame and attention went away,” she tells us. “I think he really needs to hold onto that innocence.”

She says her eye is currently on Bekah Martinez (AKA “the girl with the pixie haircut“), but she’s not choosing her as the season 22 frontrunner just yet — and for good reason. “I don’t think she’ll win,” the AliLuvs.com creator reveals. “ABC never shows the winner early on. [It’s] kind of hidden.” An interesting theory, indeed!

Fedotowsky-Manno will have to wait until the season airs to see if her theory holds true, but in the meantime, she’s gearing up for the holidays with her family. “Our main holiday tradition is to buy a bunch of presents … put them under the tree, [and] donate them to kids who need [them],” she says. In an effort to teach Molly good values as she grows, she and Manno allow their little one to choose a few gifts for herself before explaining that the rest are for less fortunate little girls and boys. “That’s super important,” she says.

We had no fun shooting pictures for our Holiday card 😂 Matching PJs is our family tradition! Anyone else? (P.S. I got these brand new on @ebay for under $20!) And vote on my blog for what photo we should use for our Holiday cards! I need help picking one! (Lots more pics on there) #AliLuvs # GotItOnEbay #ChristmasCardIdeas More PJs linked on the blog and here —-> http://liketk.it/2tEGV #liketkit @liketoknow.it #LTKholidaystyle #LTKfamily #ebay #LTKunder50 @liketoknow.it.family

As the TV vet shares, her family also has a more novel tradition that’s all about maintaining self-care amid the hustle and bustle of the holiday season (which, as stars like Kesha have noted, can be plenty difficult for many).

“I think one thing that’s really important is to give back to ourselves,” she says. This year, rather than spend even more money on a fancy dinner or some retail therapy, however, the soon-to-be mom of two opted for a more strategic treat: a mini staycation, courtesy of her Chase Marriott Rewards Premier Credit Card, which offers three nights at a category 5 hotel for every 80,000 points earned.

Choosing a pet-friendly hotel, she, Manno, Molly, and even the family dog, Owen, packed up their things for a mini getaway that was right in line with their main focus for the holiday season: spending time with one another. “We stayed in the hotel room, we ordered room service, Molly loved her new surroundings, [it] was the perfect way to do [it].” We’ll say!

It was also likely one of their last vacays as a group of three (four, counting Owen), with their yet-to-be-named little one due in May 2018.

Though Fedotowsky-Manno says she has a list of possibilities, choosing a moniker for their newest family member may be a game-time decision. “With Molly, Molly was my grandmother’s name — there was never any question,” she explains. “This one, we’re unsure. … After we meet the baby, we’ll pick a name.” Fair enough!

Merry Christmas, Ali — and a Happy New Year, too!

What’s your trick for picking the Bachelor winner? Share with us over @BritandCo.

Nicole Briese
Nicole is the weekend editor for Brit + Co who loves bringing you all the latest buzz. When she's not busy typing away into the wee hours, you can usually find her canoodling with her fur babies, rooting around in a bookstore, or rocking out at a concert of some sort (Guns N' Roses forever!). Check out all her latest musings and past work at nicolebjean.com.
Celebrities
Celebrity News
Celebrities Celebrity Baby the bachelor The Bachelorette