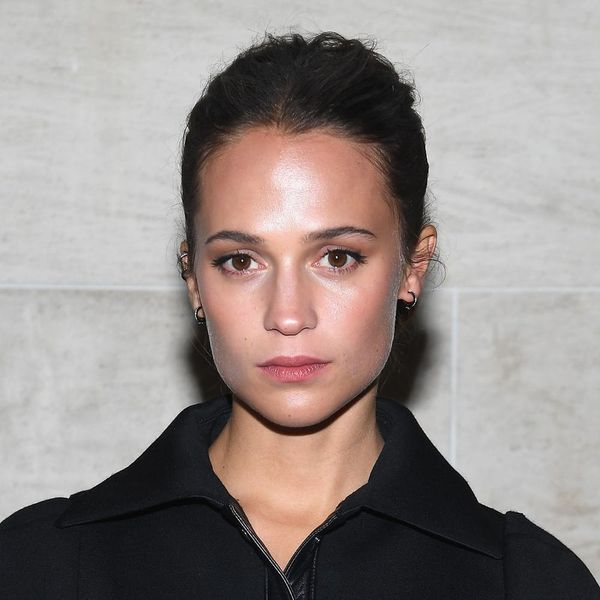 The secret’s out! After Oscar-winner Alicia Vikander and Michael Fassbender reportedly tied the knot in a private Ibiza ceremony last weekend, the Tomb Raider actress has stepped out on the red carpet wearing one *very* noticeable new addition to her left hand.

From the looks of things, the stack of diamond bands surrounding one *massively* impressive diamond on her ring finger would appear to be the a wedding band accompaniment for the Oscar-winner’s ginormous engagement ring.

With reps for the couple remaining mum on their rumored nuptials, the not-so-subtle statement piece was likely a way for the 29-year-old to confirm the reports swirling around her would-be marriage without ever having to say a word,

The pair has been dating since 2014, when they played husband and wife in the 2016 drama, The Light Between Oceans. Since then, they’ve been famously private with regard to their relationship. Sans for a joint Golden Globes appearance, during which the adorable duo gave fans the slightest bit of PDA, the two have mostly remained mum about their feelings for one another.

“I think we’ve made a clear statement that we keep certain things between us,” Vikander told Entertainment Weekly back in September. “It was very easy to unite, but that’s quite personal.”

What do you think of Alicia’s ring? Share with us @BritandCo.

Nicole Briese
Nicole is the weekend editor for Brit + Co who loves bringing you all the latest buzz. When she's not busy typing away into the wee hours, you can usually find her canoodling with her fur babies, rooting around in a bookstore, or rocking out at a concert of some sort (Guns N' Roses forever!). Check out all her latest musings and past work at nicolebjean.com.
Celebrity Couples
Wedding Style
Celebrity Couples Celebrity Wedding rings