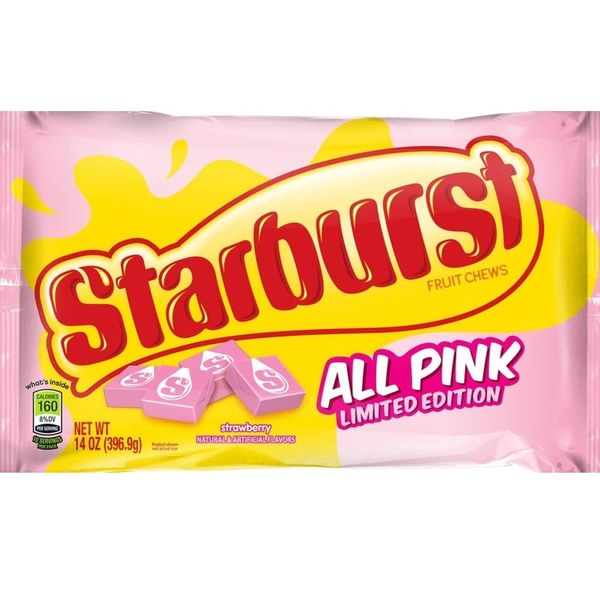 Our taste-buds were totally psyched when Starburst released a bag of JUST pink and red candies (almost as excited as we were about Starburst-infused vodka). But now it appears like the treat-making folks have decided to narrow in even further on our particular tastes by introducing bags of ALL pink Starburst candies.

While we totally understand the love of pink treats (not that we’d turn down something red, blue, or even chocolatey brown), it seems like the rosy favoritism is popular and even rampant among Starburst fans.

Is there a better compliment than being called a Pink Starburst? #NationalComplimentDay pic.twitter.com/kldPopFBQV

Matt Montei, Sr. Director of Confections at Wrigley, revealed, “On social media we’re seeing people talk about pink Starburst more than any other flavor; there’s even a meme about being treated ‘like a Pink Starburst.’”

Never let anyone treat you like a yellow starburst. You are a pink starburst.

Just wanna treat my girl like a pink starburst

Don't let life treat you like an orange Starburst when you're clearly as good as a pink one.

He added, “The Pink conversation and fanfare has continued to grow so we decided to act.”

Coming out in April and only available for a limited time on shelves at Walmart, Walgreens, Target, Kroger, Meijer, and H-E-B, and even available via Amazon, you’ll surely want to stock up before the all-pink bags disappear and you’re stuck with a bag of just a few pink candies and a heck of a lotta yellow, orange, and red leftovers.

Do you LOVE the idea of all-pink bags of Starburst? Let us know @BritandCo!