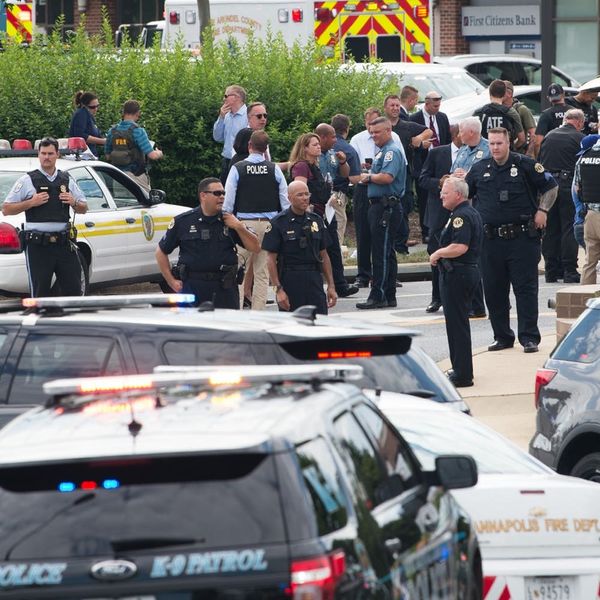 Authorities say there are multiple injuries and fatalities after a shooting on Thursday, June 28, at the Capital Gazette newspaper building in Annapolis, Maryland.

According to reports, a gunman entered the newsroom and opened fire on Thursday afternoon. The Associated Press reports that Anne Arundel County Acting Police Chief William Krampf confirmed five fatalities. And Anne Arundel County Executive Steve Schuh said in a press conference that “there are several people who have died,” and several others have been taken to local hospitals with injuries.

He also stated that “the shooter is in custody and being interrogated at this time.”

Authorities confirm several people are dead after a shooting at the Capital Gazette building in Annapolis, Maryland. The shooter is in custody and being interrogated, officials say https://t.co/ekcLc5f7JD pic.twitter.com/cvmflAM7Rs

Lieutenant Ryan Frashure, a spokesperson for the Anne Arundel County Police Department, told CNN affiliate WJLA that they were working to ensure the safety of those who were still in the building. “We’re doing everything we can to get people out safe and we’re trying to minimize the casualties,” Frashure said, noting that the building was being evacuated and they were focused on reuniting the workers with their families.

Governor Larry Hogan tweeted that he was “absolutely devastated to learn of this tragedy in Annapolis,” writing, “Please, heed all warnings and stay away from the area. Praying for those at the scene and for our community.”

Absolutely devastated to learn of this tragedy in Annapolis. I am in contact with County Executive Steve Schuh, and @MDSP is on the scene assisting @AACOPD. Please, heed all warnings and stay away from the area. Praying for those at the scene and for our community. https://t.co/bI6PdUjHfh

President Trump was notified of the shooting, as well, according to White House spokesperson Lindsay Walter. He tweeted, “My thoughts and prayers are with the victims and their families. Thank you to all of the First Responders who are currently on the scene.”

This is a developing story.