This Blazer Is Your Personal Security Guard 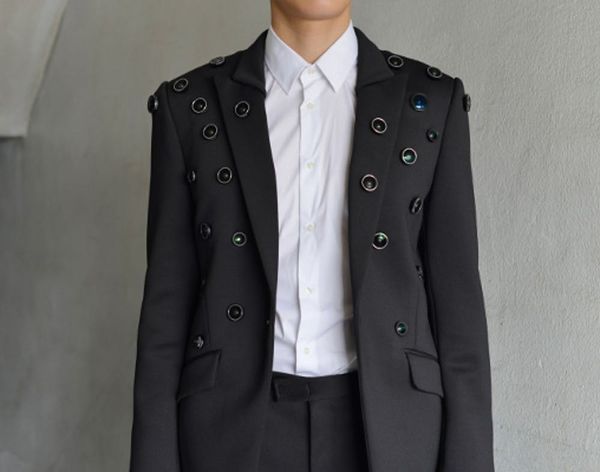 Earlier this month we featured a screenless camera. But now that ain’t no big thang, seeing as we just came across a hands-free wearable that records the world around you, step by step. The Aposematic Jacket is not your boyfriend’s everyday blazer. For one thing, it’s covered front-to-back with camera lenses, around 50 total.

Aposematism is a word that describes the colors or markings that act as defense mechanisms on animals, warding off potential predators. South Korean art duo Shinseungback Kimyonghun were inspired by this natural concept to design and develop the camera-covered jacket.

Artists Shin Seung Back and Kim Yong Hun conceived the idea. Former Giorgio Armani designer Jehee Sheen stitched together the jacket that houses the cameras with a hidden battery pack that powers the system. The garment is designed to protect you on the streets by repelling would-be attackers… because there’s nothing like 50+ camera lenses to make thieves feel paranoid.

If you sense a serious threat or attacker, you can press a button to snap a 360-degree photograph with the Raspberry-Pi controlled system, which will automatically upload to the Web to forward to authorities. (It just got real.)

Would you wear this blazer to feel safe at all times? Let us know in the comments!

Maureen Luyun
Maureen is a writer and brunch enthusiast laughing way too loudly in Texas. If she isn't voraciously turning the pages of the latest celebrity memoir, she's probably picking up a new skill to use for a DIY project. Shopping (online and off) is her cardio, and as an avid advocate for the handwritten note, she loves to send (and receive) snail mail. Like Kanye West once tweeted, sometimes she gets emotional over fonts.
Camera
Tech
Camera
More From Tech