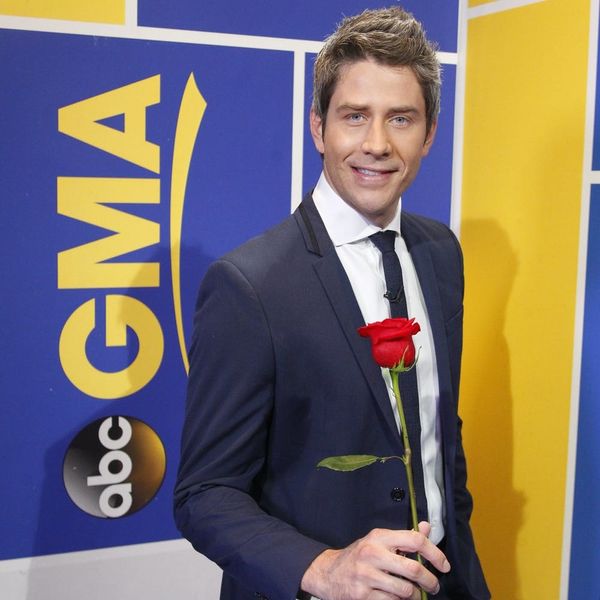 It’s happening, Bachelor Nation! We still have to wait a few months before we get to actually watch Arie Luyendyk Jr.’s on-screen quest for love, but filming has officially begun on the reality series’ latest season, and Bachelor creator Mike Fleiss is keeping fans in the loop.

He also shared a pic of himself with the newest Bachelor on set, posing alongside host Chris Harrison in front of the famed Bachelor mansion. And we have to say — with his sleek suit, crisp white shirt, stylishly thin black tie, and friendly smile, Luyendyk Jr. certainly looks like he’s ready to meet the ladies who will try to win his heart.

Guess who's back? Back again. Arie's back. Tell a friend. #TheBachelor #JanuArie pic.twitter.com/XaooVeuZ6U

Fleiss later offered fans a little insider info on what was happening behind the scenes, tweeting, “Fantastic group of women. @ariejr has got some tough choices to make tonite…”

Fantastic group of women. @ariejr has got some tough choices to make tonite… #thebachelor

So, who might those women be? We don’t know about the new contestants, but we wouldn’t mind seeing some Bachelor Nation veterans return for another shot at love. And it’s certainly not unheard of — Nick Viall competed on Kaitlyn Bristowe’s season after getting his heart broken on Andi Dorfman’s season, and Becca Tilley and Amber James vied for Ben Higgins’ heart after leaving Chris Soules’ season without a ring.

We’ll meet all of the ladies, though, when season 22 of The Bachelor premieres in January 2018.

Are you excited to see Arie Luyendyk Jr. as the next Bachelor? Let us know @BritandCo!