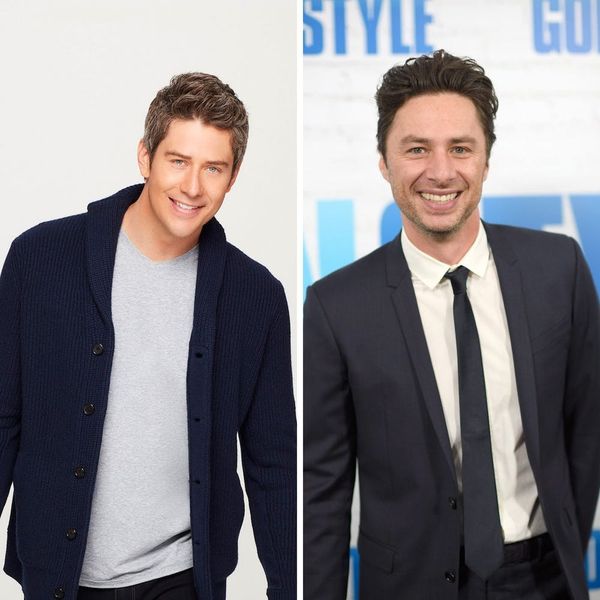 We’ve gotten to know season 22 BachelorArie Luyendyk Jr. pretty well over the past couple of weeks, but there may be another reason why he already seems so familiar: He happens to have a “long lost twin” in Scrubs actor Zach Braff. And this week, the two FINALLY met!

Fans first noticed a resemblance between the two back when the new Bachelor was announced in September. The Garden State star picked up on it, too, tweeting an announcement of Luyendyk as the series’ next leading man and writing, “I can’t believe I’m the Bachelor! I didn’t even audition. Looking forward to the fantasy suites.”

I can't believe I'm the Bachelor! I didn't even audition. Looking forward to the fantasy suites. pic.twitter.com/lenjbeEE68

Someone sent back the pic with one minor alteration that put everything into place.

This week, the stars’ worlds collided in real life, when both showed up at the Television Critics Association winter press tour in Pasadena, California, to promote their respective ABC shows. (Luyendyk was there on behalf of The Bachelor, and Braff was talking up his new series, Alex, Inc.).

“Found my long lost twin @zachbraff,” Luyendyk captioned a shot of himself with the actor. He added a little shout-out to his new pal’s show, writing, “Oh and he told me to tell you to watch @alexinc_abc.”

Found my long lost twin @zachbraff... Oh and he told me to tell you to watch @alexinc_abc

Braff took to Twitter to share his own pic of the lookalike pair, joking, “Like looking in the mirror.” And while the two are obviously not identical, there are definitely some similarities between them.

If you’re still not feeling the twinning vibe, maybe you’ll agree with other Bachelor Nation fans who think Luyendyk looks like another famous TV star: David Schwimmer, AKA Ross Geller on Friends.

Ok figured it out Arie kind of reminds me of Ross on Friends #TheBachelor pic.twitter.com/29KiHJK3HD

Arie is so good looking. Then someone compared him to Ross gellar #TheBachelor pic.twitter.com/sS3CPdHh51

Episode 1: The One Where the Bachelor Looks Like Ross from Friends. #TheBachelor #arie #Friends

The race car driver-turned-real estate agent may not see the resemblance — he retweeted one comparison with, “Too good. Do I though?” — we think he should meet up with Schwimmer IRL so we can do a side-by-side assessment.