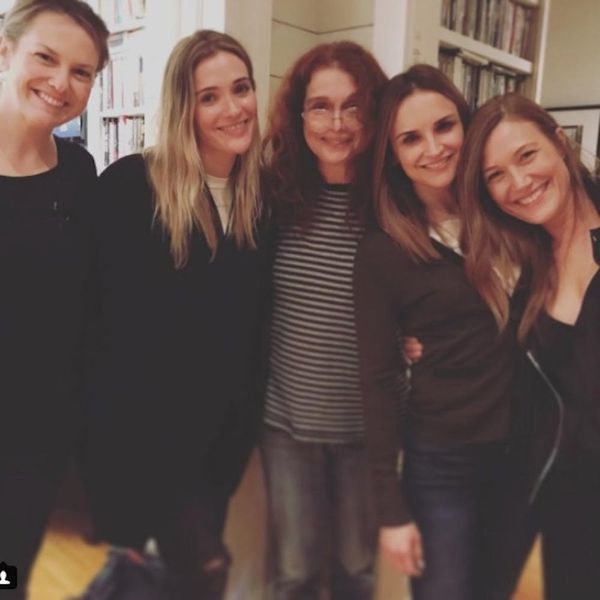 The 2018 Golden Globes didn’t just give us a mini-Harry Potter reunion — the awards show also got the Baby-Sitters Club cast back together for a viewing party straight out of our teenage dreams.

this is a club i’m so grateful to be a part of 🙌🏼 these women have my heart...and all my secrets 😬. #friendsforever #bsc4life

Stars Rachael Leigh Cook (Mary Anne Spier), Larisa Oleynik (Dawn Schafer), Bre Blair (Stacey McGill), and Schuyler Fisk (Kristy Thomas) gathered at home of the movie’s director, Melanie Mayron, to watch the big event on Sunday night. The girls also made sure to tag Marla Sokoloff (who played Cokie Mason and is currently reprising her role as Gia in Netflix’s Fuller House) in the pic. Even though she couldn’t make it to the party, she was clearly there in spirit with her costars.

“I’m super bad at posing for photos, but also super good at loving these women until my heart bursts wide open, so I guess the latter wins out,” Oleynik captioned a photo of the group. Fisk shared the same pic on her own account, writing, “This is a club I’m so grateful to be a part of. These women have my heart…and all my secrets.”

“There is always so much to catch up on — marriages, babies, breakups, work, politics. You name it, we went there,” Cook told ET about the reunion. “Then we stopped chatting to watch Oprah’s Golden Globes speech. It felt like the perfect way to end a girl power kind of a night.”

The movie adaptation of the iconic book series came out a whopping 22 years ago, in 1995. And while Cook says that a reboot of the classic flick isn’t likely to happen, that doesn’t mean the longtime friends aren’t always looking for ways to spend more time together. The She’s All That star even joked that at one point they considered doing a spoof of the title.

“It’s like no time has passed at all,” the actress told ET of their hangouts. “First of all, these girls look amazing. And I think we all trusted each other enough back then, even as young teens, to behave like our authentic selves. So for better (them) or worse (me), we’re still very similar to the people we were back in 1995.” Talk about friendship goals!

Would you watch a reboot of the Baby-Sitters Club? Let us know @BritandCo!