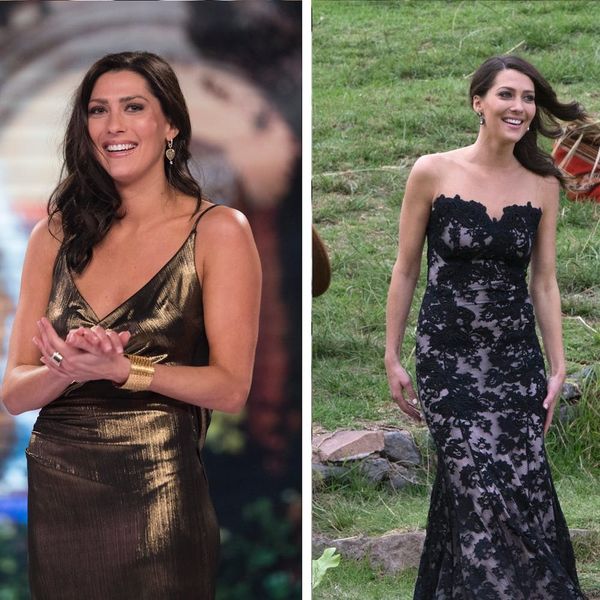 The world’s hearts collectively broke for Bachelor finalist Becca Kufrin in season 22 when Arie Luyendyk Jr. pulled a Jason Mesnick and broke up with her on national television. While it was devastating, she handled it with grace and plenty of style to boot. Like a phoenix rising from the ashes, the fashion-savvy Kufrin was named the new Bachelorette, and we can’t stop cheering. We’re keeping our eyes peeled for her outfits for the upcoming season, but in the meantime, take a walk down memory lane with some of Kufrin’s best fashion moments. In her own words, “Let’s do the damn thing.”

2. Season Finale Gown: For the season finale of Arie Luyendyk Jr.’s run as the Bachelor, she wore a lacy strapless gown by Olvi.

3.Jazzy Sequined Shorts and Jacket: Our new Bachelorette is certainly not afraid to shine. Kufrin paired a sparkly silver jacket with black sequined shorts, and looked damn good doing it.

5. Lacy Black Illusion Gown: She certainly knows how to make an entrance! Kufrin made quite the impression in a risqué black Vici Dolls Total Eclipse Lace Maxi.

Kimberly Wang
Kimberly Wang writes about all things pop culture, tech, style, and beauty. She's a Bay Area transplant and has an MFA in Creative Writing from Columbia University. On a sunny New York day, you can find her hanging out with her mini schnauzer Isabelle Jellybean on a blanket in Central Park.
Celebrity Style
Celeb Style
Celebrity Style The Bachelor The Bachelorette TV
More From Celeb Style