How to Make Dessert for One That Is Actually Healthy 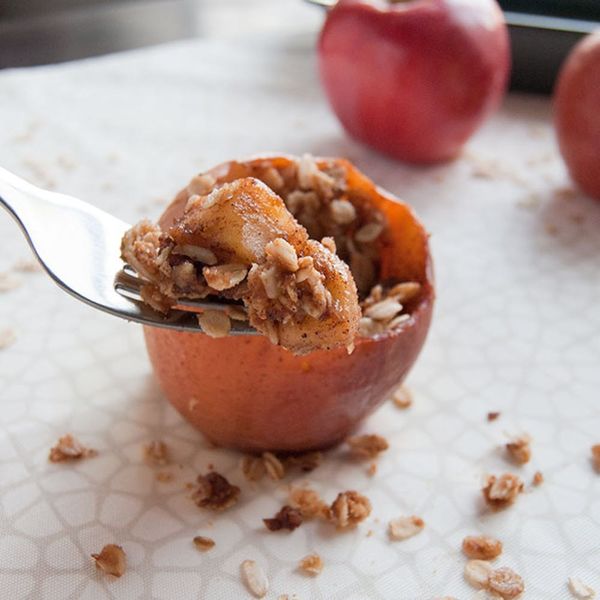 Winter is in full swing, and with our pumpkin recipes behind us, it’s time to recognize the truly versatile and delicious apple. One of my favorite comfort foods is homemade apple crisp paired with some vanilla ice cream, but if you’ve actually ever made this dessert classic before, you know that drool-worthy crisp is loaded with butter and sugar. Here, I will show you how to make an alternative version that is gluten free, low in sugar and vegan, yet so, so good! Also, having a single-serve recipe is awesome for those of you (myself included) that will devour an entire batch single-handedly. Go ahead — gather some apples and indulge in your sweet tooth with this delicious dessert!

Ingredients:
For the filling:

2. Carefully remove the insides of the apple, leaving the outer skin intact.

3. Chop apple pieces and put in a small dish.

8. Top apple with the crisp and place in a baking dish.

9. Add about 1/4 cup of water to bottom of baking dish and cover with foil.

10. Bake for 15 minutes covered, then remove foil and continue to bake for an additional 8-10 minutes.

Start by removing the core and insides from the apple. Be careful not to puncture the skin too much! I found it easiest to slice the top off and carefully trace along the outer edge with a knife. Then I made slices to remove the core and used a spoon to get the remainder out. This step calls for patience, but I swear it’s worth it in the end!

Pack your delicious filling back into that bad boy. It should be pretty full but still have some room for the crisp.

Place apple in a baking dish — a brownie pan works perfectly! Add a small amount of water to the pan and cover with aluminum foil. Bake for 15 minutes covered and an additional 8-10 minutes with the foil removed.

It’s hard to believe this is actually healthy!

This would be so good with some ice cream or caramel! Coconut or cashew ice cream will keep it healthy.

Amanda Sager
Amanda is a graphic designer by day and a foodie 24/7. She's an East Coast native living in Northern California. When she's not busy trying new recipes or cooking healthy cuisines, you can find her working out, playing with her cat, or using her glue gun to DIY anything possible. She lives for strong coffee, Sunday brunch, traveling, and staying curious.
Healthy Eating
The Conversation
More From Healthy Eating