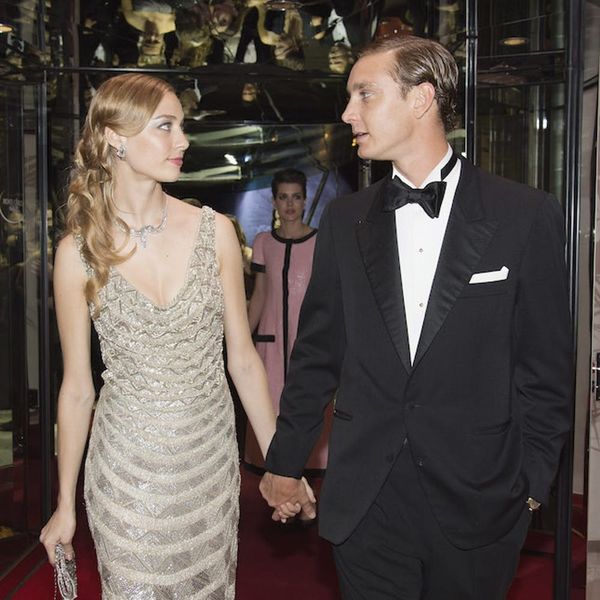 When we think royal wedding, we think a grand church affair, a long-sleeved white lace dress with a cathedral veil that is the length of the entire aisle. Maybe even a carriage or two. On Saturday, Grace Kelly’s grandson and member of the Monaco royal fam Pierre Casiraghi wed his longtime girlfriend and Italian heiress Beatrice Borromeo on Saturday in a brief civil wedding officiated by a justice of the principality at Prince Albert’s palace in Monaco. That is basically the royal equivalent of a city hall wedding. According to People, the couple then joined 500 of their friends and family for a party. This is one low key blue-blooded couple.

But it’s not the lack of pomp and ceremony that has people talking. It’s Beatrice’s non-traditional yet stunning pink and gold haute couture dress by Valentino that was the showstopper.

Maison Valentino posted this Instagram shot of the happy couple after their ceremony along with the caption: “The House of Valentino is pleased to announce que Beatrice Borromeo wore a Valentino Haute Couture dress designed by Creative Directors Maria Grazia Chiuri and Pierpaolo Piccioli, for her civil wedding with Pierre Casiraghi on July 25th at the Prince’s Palace of Monaco. The wedding gown was created in a pale pink and gold silk chiffon lace.”

According to Women’s Wear Daily, the dress is an adaptation of a look from Valentino’s spring 2015 collection and custom created for the heiress. It looks like the newest member of Monaco’s royal family is single-handedly bringing the butterfly-sleeved wedding dress back. Plus, despite being a royal bride, the girl is on-trend with accents you have probably Pinned for your wedding. She carried a simple bouquet of wildflowers, rocked a boho flower crown and looked incredibly elegant for her big day.

We can tell this is one bride who is not interested in following in someone else’s footsteps.

What do you think of Beatrice Borromeo’s wedding dress? Tell us in the comments below!

Kimberly Wang
Kimberly Wang writes about all things pop culture, tech, style, and beauty. She's a Bay Area transplant and has an MFA in Creative Writing from Columbia University. On a sunny New York day, you can find her hanging out with her mini schnauzer Isabelle Jellybean on a blanket in Central Park.
Party
More From Party