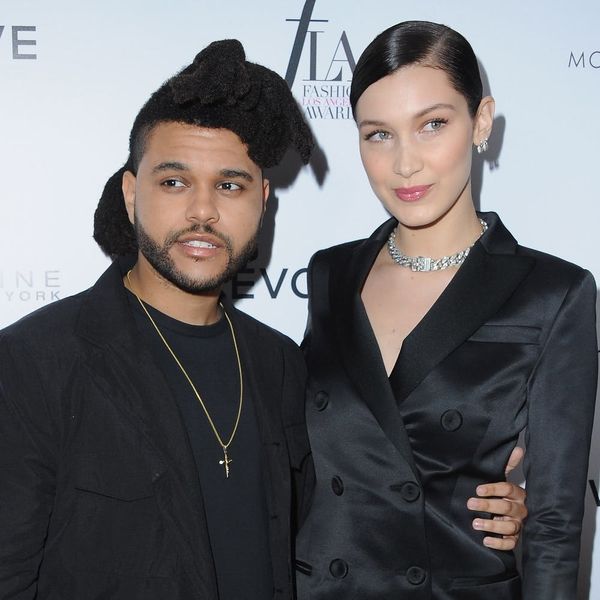 Bella Hadid walked the H&M runway at Paris Fashion Week last night, where the brand unveiled its “see now, buy now” Spring and Summer 2017 collection. Normal night for a normal model, right? Wrong. This time, as Hadid took to the catwalk, her ex-boyfriend The Weeknd provided the music track. Live.

The model has admitted the very public breakup was tough, and so it must’ve still been SO awkward to see him again, especially now that he is dating Selena Gomez. Yet, under circumstances that might stress out most of us, the younger Hadid sister held her own. This is how she did it.

1. Stay focused on the job at hand. Hadid slayed that runway per usual, but this time there was fire in that catwalk gaze. She never lost her laser focus, and that was key.

2. Have a blast. Hey, there’s nothing wrong with keeping a group of your nearest and dearest close by when the ex is around (even if they’re paid to be). Hadid wasn’t afraid to laugh with her fellow models as they closed the show.

3. Bring backup. It didn’t hurt that Hadid worked alongside her big sister Gigi, who made sure to hold Bella’s hand as they strutted to The Weeknd’s music. During their closing walk, Bella looked to her sister as if for support, which Gigi was happy to give. Was that a side-eye, Gigi?

I can't believe it! 💘💘💘 I was smiling SO HUGE on the inside I promise!!!! The most fun and nerve racking experience of my life but I wish I could do it over and over and over again!!!!! 🎀🎀Thank you @theweeknd for being the best and most incredible performer on the planet. You KILLED it, as always 😍 ❤️ And not enough thank you's to @ed_razek @10magazine @johndavidpfeiffer @monica.mitro and the whole VS family!!!💕🙏🏼💗🎀thank you for believing in me I love you all so so so much 💗💗💗💗

4. Be gracious. This is actually the second time Bella has had to work with her ex-boyfriend present. Last November, The Weeknd sang “Starboy” at the Victoria’s Secret Fashion Show while Bella made her debut. After the performance, she thanked him via Instagram for “being the best and most incredible performer on the planet.” Now that’s classy.

Anything we’re missing? How do you handle these awkward run-ins? Tell us @BritandCo!