Classic Thanksgiving TV Episodes to Rewatch Over and Over 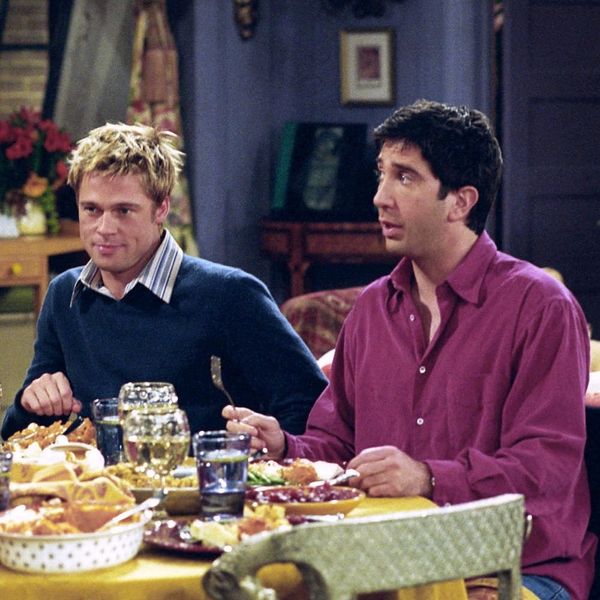 Thanksgiving isn't just a food and family (or friends!)-filled day. It's also the official kickoff to the time of year made for staying in, cuddling up, and indulging in some quality downtime. Check out some of our favorite classic Thanksgiving TV episodes to keep you entertained and cozy this year and, hopefully, for years to come. (Photos via Greg Gayne/Fox + Danny Feld/NBCU Photo Bank + Eddy Chen/NBC/NBCU Photo Bank via Getty + Richard Foreman/ABC via Getty)
Friends, "The One With All the Thanksgivings" (Season 5): Friends and Thanksgiving episodes are a match made in heaven, and it's hard to pick a favorite. So while we're starting with the episode where the gang bonds over their worst turkey days ever (complete with amazing flashbacks), we also have to include "The One With the Rumor" (season 8) for its masterful, hilarious performance from Jennifer Aniston's then-husband Brad Pitt as a vengeful ex-schoolmate of Rachel, Ross, and Monica. (Photo via Danny Feld/NBCU Photo Bank)
Brooklyn Nine-Nine, "Thanksgiving" (Season 1): What better way to push control freak Amy Santiago's buttons than by having the dinner she planned for the precinct fall apart? Jake Peralta and Captain Holt are left out of the dinner to carry out an investigation, and it's an integral — and heartwarming — evolution of Jake's backstory and their bond. B99 has a history of excellent holiday eps, and this first-season gem is no exception. (Photo via Eddy Chen/NBC/NBCU Photo Bank via Getty)
Modern Family, "Punkin Chunkin" (Season 3): The Dunphy family shows their competitive streak once again in "Punkin Chunkin," one of the show's few Thanksgiving entries in the TV canon. The same stifling (and hilarious) dynamic rears its head between Phil and Claire and Mitch and Cam, who realizes that no one believes his oft-told story of chucking a pumpkin through a minister's car sunroof. The family storms away from Claire's dinner to head outside and make Cam try to prove it. Naturally, he dents Claire's car. (Photo via Richard Foreman/ABC via Getty)
The O.C., "Homecoming" (Season 1): In standard O.C. fashion, the Thanksgiving episode packed plenty of drama, with Ryan bringing Marissa back to Chino and dealing with his troubled family, and Seth inviting both Summer *and* Anna over for dinner. Oops. (Photo via Fox/Hulu)
Gilmore Girls, "A Deep-Fried Korean Thanksgiving" (Season 3): Even Lorelai and Rory Gilmore have trouble with all the food options before them when they have to pull off attending not one, not two, not even three, but FOUR Thanksgiving dinners: one at the Kim family's, where Lorelai is forced to eat Tofurkey; one at Luke's, where they're joined by Jess; one at Sookie's, where EVERYTHING is deep fried; and, of course, one at Emily and Richard's, where Rory reveals she has applied to Yale — which is certainly not Harvard. (Photo via Warner Bros./Netflix)
Grey’s Anatomy, "Thanks for the Memories" (Season 2): Even though Izzie plans a big staff Thanksgiving dinner at Meredith's, the difficulties that some people experience on the holidays become clear, as many of them make excuses not to help out with it or attend — a feeling all too real for many. (Photo via Craig Sjodin/ABC via Getty)
Seinfeld, "The Mom and Pop Store" (Season 6): Even in its about-nothingness, Seinfeld fit in a nod to the stresses of the holidays — namely, is Jerry invited to his dentist Tim Whatley's Thanksgiving party along with the rest of the gang? In the end, he decides to crash the party in search of someone to help him out with some dental work, since no one is open for the holiday. (Photo via J. Delvalle/NBC/NBCU Photo Bank via Getty)
New Girl, "Thanksgiving" (Season 1): New Girl takes its Thanksgiving episode output seriously, but its first edition of the yearly tradition is one of the most memorable. It's fun to look back on the early days of the group dynamic: Jess invites someone she has a crush on to their feast, but of course, the guys just want to make sure he's well suited to them. Classic. (Photo via Greg Gayne/Fox)
How I Met Your Mother, "Slapsgiving" (Season 3): Ah, the continuation of the slap bet and the first Slapsgiving. This episode marks Marshall and Lily's first married Thanksgiving, and she's obsessed with making it perfect. She even declares herself Slap Bet Commissioner to make sure Marshall and Barney's silly feud doesn't ruin it. Spoiler alert: It doesn't work. (Photo via CBS/Hulu)
Parenthood, "Happy Thanksgiving" (Season 2): More than just a lip-service holiday episode, "Happy Thanksgiving" was a culmination of a lot of story lines on the season at that point — from Sarah's failing romance to Crosby's attempt to impress his future mother-in-law to Zeek's surrender of his attitude in favor of a nice holiday. Plus, it's just nice when the full Braverman family dynamic is on display for any reason. (Photo via Justin Lubin/NBC/NBCU Photo Bank via Getty)
It’s Always Sunny In Philidelphia, "The Gang Squashes Their Beefs" (Season 9): Why the gang decides to host every person they've ever had a beef with for Thanksgiving dinner is beyond any reasonable person's purview, but then again, they're hardly a reasonable crew. It (OBVIOUSLY) descends into chaos, not least of which includes a fire in Mac's room, and in the end, the gang abandons their foes inside the burning apartment. It's funny and perfect for the holiday in only the way this show could pull off. (Photo via FX/Netflix)
That '70s Show, "Thanksgiving" (Season 1): When Laurie Foreman brings a friend home for Thanksgiving, Eric finds his eye wandering from Donna. Drama ensues. (Photo via Fox via Getty)
Full House, "The Miracle of Thanksgiving" (Season 1): Though the Netflix reboot Fuller House is super holiday-episode friendly, the Thanksgiving episode from the first season of the original series packed one of the biggest emotional punches in the show's history. It's the family's first Thanksgiving without Pam, the kids' mother and Danny Tanner's wife, and they're determined to make it a special one. (Photo via ABC Photo Archives/ABC via Getty)