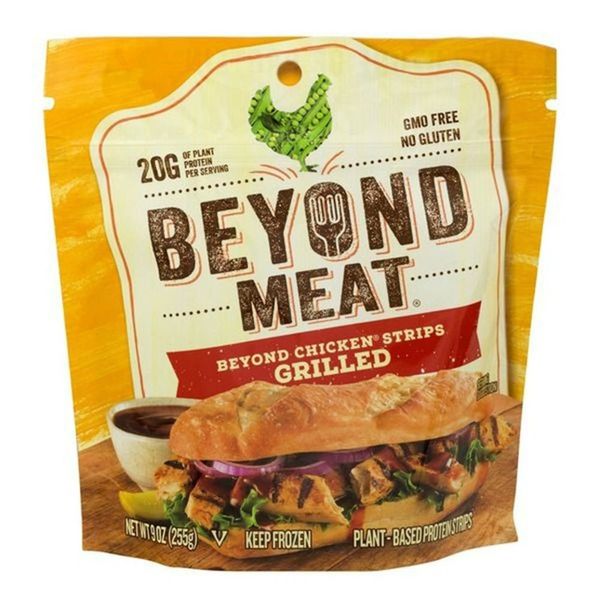 We're always on the hunt for the best vegan meats around, and these days, it's easier than ever to find a variety of meatless meats that satisfy all of our cravings, from hot dogs to bacon. Gone are the flavorless vegan mystery loaves of yesteryear. Instead, stores are stocking high-quality brands that focus on getting texture and flavor just right. That means using new ingredients like pea protein, old classics like wheat gluten, and plenty of seasonings so each bite is just as satisying as the real thing. From burgers to deli slices, sausages to chicken, these are the vegan meat substitutes that we always have on hand.
Beyond Meat The Beyond Burger ($6): We're not going to lie — the texture and flavor of these vegan burgers is almost too spot on. If you can shake the feeling that someone tricked you into eating real meat, though, nothing is better for beating that burger craving. These patties are also great on the grill.
Beyond Meat Beyond Chicken Grilled Strips ($5): Beyond Meat totally nails the texture of grilled chicken with these strips. Stir-fry them, use 'em to top salads — the possibilities are deliciously endless.
Boca Original Vegan Veggie Burgers ($4): There are a lot of great veggie burgers on the market these days, but Boca Burger remains a favorite. It has a chargrilled flavor and meaty texture that's the most reminiscent of the backyard burgers of your youth.
Field Roast Vegan Apple Maple Breakfast Sausage ($5): We don't know what sort of dark magic Field Roast uses to make their products taste so good, but these apple maple breakfast sausages are nearly indistinguishable from the real deal. Lightly brown them in a skillet and serve with a tall stack of pancakes for the ultimate vegan breakfast.
Field Roast Italian Grain Meat Sausages ($5): Vegan sausage is just as versatile as the real thing, so you'll always want to keep a pack of these in your fridge. Serve them on a bun with marinara and Miyoko's Kitchen Vegan Mozz, or slice and add to a pot of rice and beans for an easy vegan comfort food meal.
Gardein Seven Grain Meat Free Crispy Tenders ($5): Gardein's meat-free tenders are the perfect base for your favorite meals. Keep it simple and eat them with a dipping sauce, or add them to burritos, casseroles, and stir-fries.
Lightlife Fakin' Bacon Organic Smoky Tempeh Strips ($5): There are faux bacons out there with more convincing textures, but the flavor of this tempeh is spot on: smoky, salty, and just a little sweet. It'll make any sandwich 10 times better.
Maple Bacon Vegan Jerky ($8): Sometimes even vegans crave something "meaty" to chew on. The texture of this vegan jerky made from soy gets it right.
Quorn Vegan Spicy Chik'n Patties ($5): Quorn's "chick'n" patties are the sort of thing to make when you're craving a meatless version of your old fast food favorite. They also make a tasty vegan chicken Parm.
Sweet Earth Benevolent Bacon ($4): Made from seitan, Benevolent Bacon has a hearty texture that's perfect on veggie burgers or served as a breakfast side.
Sweet Earth Seitan ($5): Sweet Earth seitan has the texture of beef or pork. Dress it up in your favorite sauce, or sautée with peppers and onions to make a vegan steak sandwich.
Tofurky Hickory Smoked Deli Slices ($3): Load up your vegan sandwiches with these hickory smoked deli slices.
Tofurky Veggie Roast ($13): Tofurky is the original vegan roast, and it is legitimately delicious. From the satisfying texture to the savory wild rice stuffing, this is the one you'll want to serve at your next big gathering.
Trader Joe's Soy Chorizo ($2): Spicy, tangy, and hearty, vegan chorizo is a most versatile (and inexpensive) ingredient. Add it to your tofu scrambles, tuck it into tortillas, or crumble it into casseroles.
Yves Jumbo Veggies Dogs ($5): These jumbo veggie dogs mean business. They're big enough to grill without having to worry about them drying out.

Justina Huddleston
Justina Huddleston is a food writer living in Los Angeles. When she's not busy writing, she spends her time in the kitchen creating both virtuous and decidedly junky vegan food. Buffalo chickpea pizza, anyone? She's also been known to eat a plain block of tofu or beans straight out of the can for lunch, but somehow those culinary adventures don't make it to her Instagram. You can follow Justina on Twitter or see what's cooking in her kitchen on her blog, A Life of Little Pleasures.
Healthy Essentials
Healthy Eating
Healthy Essentials Healthy Living Vegan Recipes
The Conversation
Reviews:
More From Healthy Eating