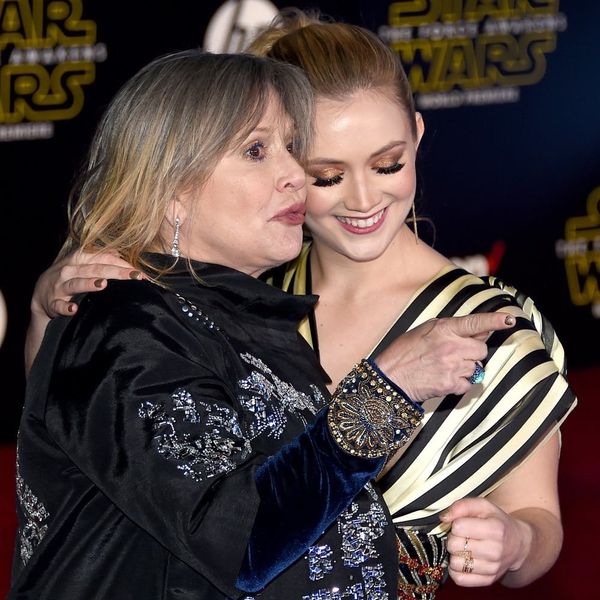 The everlasting bond between Billie Lourd and her late mother, Carrie Fisher, is still so evident a year after Fisher’s death, including in the tribute Lourd just posted for her mother in honor of the release of the industry icon’s final film, Star Wars: The Last Jedi.

Sharing a pic of herself with her mom in a sweet embrace on the red carpet at the Star Wars: The Force Awakens premiere back in December 2015, the 25-year-old added the simple yet touching caption, “I miss you.”

Of course, Instagram isn’t the only way Lourd has paid tribute to Fisher in recent weeks. At the premiere of The Last Jedi on December 9, she walked the red carpet with her hair in a braided bun like the one her mom wore as Leia in Star Wars Episode IV: A New Hope.

Though the American Horror Story actress is clearly trying to focus on her mother’s love after her untimely and tragic passing, Fisher’s brother, Todd Fisher, has revealed that the family struggled to watch some of her scenes in the new Star Wars movie.

TMZ reports that the family saw an earlier version of the highly anticipated film when Fisher was still alive. But when they saw the movie again recently, her appearance in the film — and in one scene in particular — hit them harder.

However, they did appreciate the tribute that director Rian Johnson included in the credits, which reads, “In Loving Memory of Our Princess, Carrie Fisher.”

You can see Star Wars: The Last Jedi in theaters now.

Are you planning on seeing Star Wars: The Last Jedi in theaters? Let us know @BritandCo!