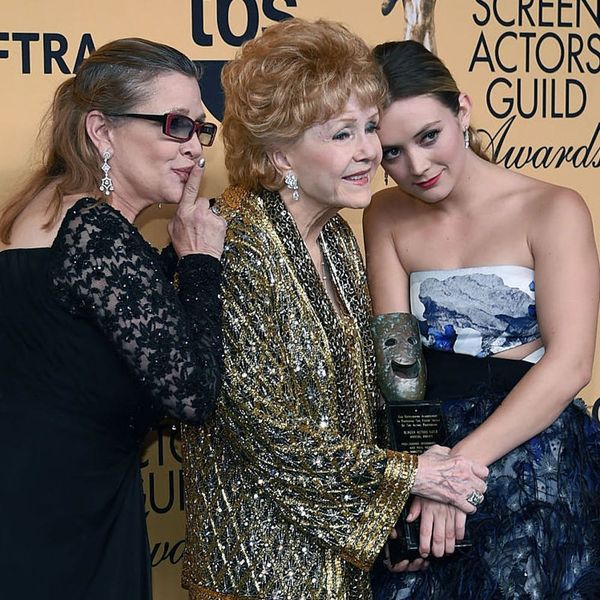 Billie Lourd continues to be an inspiration to her fans as she deals with the heartbreaking deaths of both her mother, Carrie Fisher, in December of last year, and her grandmother, Debbie Reynolds, who passed away the very next day. In the months since, Lourd has paid tribute to them on multiple occasions, in an emotional statement about her mother’s cause of death in June, at a Star Wars panel in April, and in a speech at D23 in July. Now, the 25-year-old actress has revealed how she sees her life after saying goodbye to the two women who raised her.

“I’ve always kind of lived in their shadows,” Lourd told Town & Country for its September cover story. (Indeed, her grandmother was a Hollywood icon who dominated the screen from her days as a ‘50s starlet to her adorable spin as Grace’s quirky mother on Will & Grace, and her mother had a prolific career as both a writer and an actress.)

In fact, it was her mother’s experience in the industry that led Lourd to her current path. Fisher noticed how relaxed her daughter was on set when Lourd appeared in a small part for Star Wars: The Force Awakens alongside her mom. “My mother would pull me aside and be like, ‘It’s weird that you’re so comfortable. This is the most uncomfortable environment in the world. If you’re comfortable here, you should do this.’”

Introducing our September issue, starring Billie Lourd! Click the link in our bio to read her conversation with Sarah Paulson about the loss of her mother, Carrie Fisher, and the new life she's building. 📷 @victordemarchelier. 👗@michaelkors.✨styled by @therealnicolettasantoro #tandcswans

With encouragement from Fisher, Lourd set off on her own acting career. And while her family’s legacy will no doubt follow her, Lourd is trying embrace her independence. “Now is the first time in my life when I get to own my life and stand on my own,” she told Town & Country. “I love being my mother’s daughter, and it’s something I always will be, but now I get to be just Billie.”

Being “just Billie” means making her own name in the biz and taking on unique roles like her character Chanel #3 in Scream Queens. (She also has an upcoming stint on American Horror Story.) It also means being honest about who she is and where she came from, which is something her mother taught her.

“Now, looking back and watching her interviews, I try to model what I do after her,” Lourd said. “She was so good at it. She would get so annoyed with me if I ever did a fake interview. She’d say, ‘Tell the real story.'”