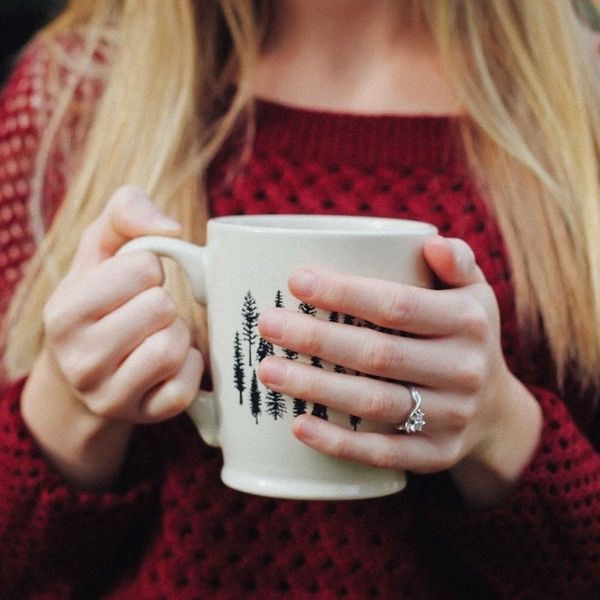 Desperate to sneak in some extra nutrition between decadent holiday meals, I recently decided to jump on the bone broth bandwagon. Several friends had raved about starting the day with a steaming cup of broth, and I had to see what it was all about.

Bone broth is hardly a new trend, but it’s been making waves across social media as the next power breakfast. Low in sugar and full of collagen, glucosamine, gelatin, minerals, and some amino acids, it’s hailed as a great way to kick off the morning and prevent those mid-morning sugar cravings. Preparing it is as simple as reheating it and pouring it in a mug, so it checks the “on-the-go” box too.

The first thing I learned is that there’s a lot of bone broth on the market, and some is better than others. I went with RoliRoti Butcher’s Bone Broth, which is widely available and made without salt or preservatives. Just be sure to pick one that’s refrigerated (so you know you’re getting the real deal), and scan the ingredients to check for unhealthy additives. There are also tons of great recipes out there for making your own broth, including this one that uses a slow cooker.

Bone broth is gelatinous when cold and, I have to admit, chicken jello first thing in the morning was not super appealing. Once I reheated it on the stove, things started looking up, but that first hurdle was hard to get past. Actually drinking it was way more pleasant. I drank about 10 ounces and found it to be soothing and easy on my stomach. It was sort of weird drinking savory broth from a mug instead of my usual tea, but I got used to it. An hour later I was starving, but I noticed that instead of wishing for my mid-morning latte or piece of chocolate, I felt motivated to go with a healthier option. Maybe it was because I’d started out the day with such a clean slate. Overall, mentally I was pretty pumped about my nutritious choices, but it was a bummer that it didn’t turn out to be a satisfying breakfast.

At the suggestion of a friend, I decided to amp up the broth a little bit the next day. It needed some extra flavor, as well as more calories to be a substantial breakfast. So I put the broth in a small saucepan and brought it to a simmer, then added some grated ginger and a pinch of salt. I let that go for a few minutes while I got ready, and then dropped in a little wilty spinach I had in the fridge, a lightly beaten egg, and a splash of lemon. I ate the broth in a bowl with a spoon and it was super tasty, and also a little less weird in soup form. This go-round, it held me over until my usual snack time. The only downside was that prepping my “soup” negated the whole quick breakfast thing.

Would I do it again?

Probably not for breakfast. Although I loved that starting off with the broth motivated me to make better choices throughout the day, it didn’t satiate me like I thought it would. And, if I was going to bother with dirtying dishes, I would prefer to just scramble a couple eggs and have some coffee or tea. That said, I would totally replace a snack with a hot cup of broth, especially when I’m feeling like I need an extra immunity boost. It’s easier than whipping up chicken noodle soup, but just as comforting. Overall, it’s something I’m down to add to my day, just not first thing in the morning.

Jessica Smith
Jessica is a blogger and professional pastry cook in San Francisco. When not whipping up desserts, you can usually find her tackling DIY projects with her husband, entertaining for a crowd, or running around the neighborhood with her rambunctious puppy, Rebel. Jessica believes in using seasonal and wholesome ingredients as much as possible and you can check out more of her recipes at her blog: By Guess And By Golly.
Healthy Essentials
Healthy Eating
Healthy Essentials Healthy Living Hit Refresh Winter
The Conversation
More From Healthy Eating