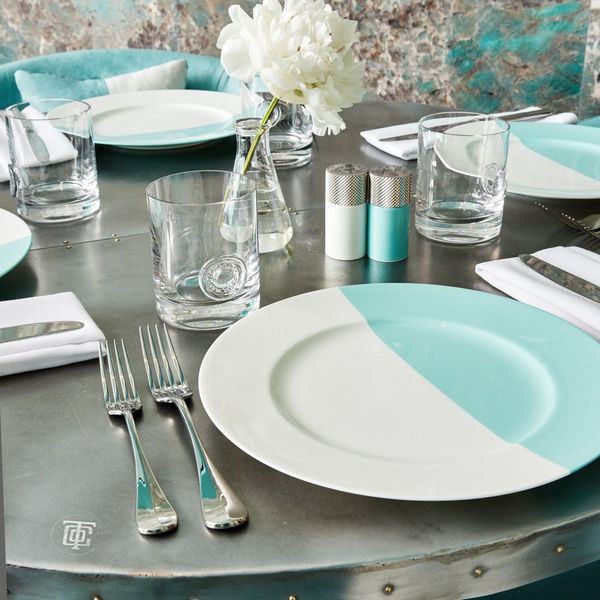 It’s been 56 years since film-goers were first enchanted by the 1961 film Breakfast at Tiffany‘s, which opened with Holly Golightly perusing the store’s windows while dining on a morning meal of coffee and a danish. The flick has inspired everything from songs to bridal collections since then, and now, Tiffany & Co. is upping the ante with a restaurant that will actually serve breakfast… at Tiffany’s!

The famed jewelry company released a statement this morning unveiling a renovation on the fourth floor of its Fifth Avenue flagship location, which will not only include a space for the brand’s newly unveiled home and accessories collection (aptly dubbed “Everyday Objects“), but its first-ever food offering in the form of The Blue Box Café.

“Both the café and redesign of the home and accessories floor reflect a modern luxury experience,” said Reed Krakoff, Tiffany’s chief artistic officer. “The space is experimental and experiential — a window into the new Tiffany.”

The decor of the eatery will exude all of the luxuries that have always been associated with the brand, with features such as herringbone marble, Amazonite stone, 15-foot-high light chains, and a portrait of founder Charles Lewis Tiffany created with 8,000 painted screws.

Of course, Tiffany’s iconic robin’s egg blue hue will also have a prominent place in the ambiance, woven into the café’s chairs, pillows, plates, salt and pepper shakers, and even walls.

The Blue Box Café will not only serve the pastry the movie’s lead character initially enjoyed (served with avocado toast, truffled eggs, or a smoked salmon bagel with schmear for $29); it will dish up plenty of other delectable American classics “made with the highest quality, regionally sourced ingredients.”

The Blue Box Café will be open for your gastronomic pleasure on November 10 during regular store hours.

Will you be having Breakfast at Tiffany’s? Tell us @BritandCo!

Shea Lignitz
Shea can be found in the nearest bookstore or brewery, exploring the great outdoors, or blasting Led Zeppelin. She grew up in the cold and rain of Northern California's redwoods but is currently wandering around Texas.
Breakfast Recipes
Food News
Breakfast Recipes Jewelry Movies
The Conversation