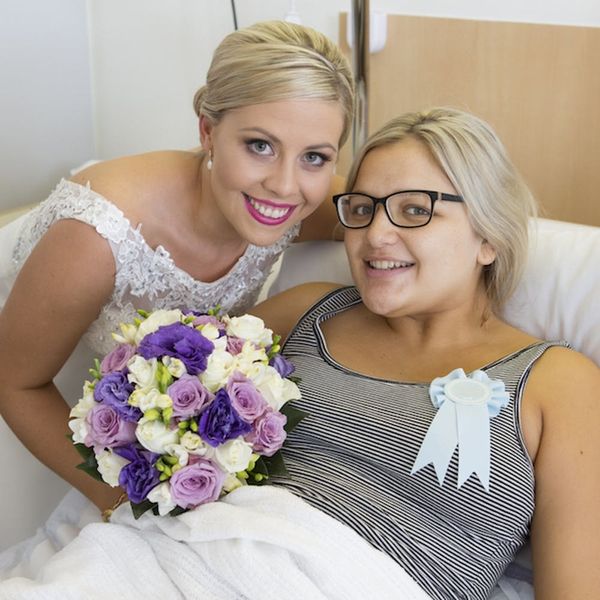 According to a study conducted by The Knot, the average engagement lasts 14 months. That’s over a year’s worth of planning and prepping for just one very special day. After all that preparation, sometimes hiccups do still occur, but you just have to learn how to bouce back quickly and make the best of it. That’s exactly what happened on October 17 when Queensland bride Bernadette Beahan received a call on her wedding day from one of her bridesmaids and BFF Melissa White. Melissa was calling to let Bernadette know she wouldn’t be able to fulfill her duties as a bridesmaid that day as she had gone into labor five weeks early.

According to her interview with Motherish, Bernadette said there was “a lot of mixed emotions” of equal parts joy and sadness, and they “both sat on the phone crying to each other for five minutes.” Rather than falter, however, the bride did something amazing. Since there was still time before the ceremony, she called her wedding photographer Talitha Rice and asked Talitha to meet her and her other bridesmaids at the hospital.

“Bernadette really is one of the sweetest people you’ll ever meet,” Talitha tells us. “She phoned me on the morning of the wedding, a few hours before I was due to begin photographing to tell me the news, I was in complete shock. When she asked if it would be possible to move the schedule to allow a visit to the hospital, I of course said yes and helped her shuffle things around.”

At the hospital, the photographer was able to capture photos of the bridal party all together. The best part was she also caught on film Bernadette meeting her best friend’s son Hunter for the first time. Cue the awws.

While the moments were sweet, Bernadette was still sad that her best friend couldn’t stand by her when she said her vows. “As happy as Bernadette was for Mel, welcoming Hunter into the world, she was devastated not to have [Mel] by her side for the big day and was determined to [make it work],” Talitha says. And despite her best friend not being there, the days still looked to have turned out spectacularly.

“I always tell couples there are no rules on your wedding day and you should do whatever you like, Bernadette certainly did,” Talitha tells us. “It was beautiful to witness two best friends both experiencing the most memorable days of their lives and an honor for me to capture.”

What do you think about this wedding day story? Do you have any of your own to share? Tell us in the comments below!

Kimberly Wang
Kimberly Wang writes about all things pop culture, tech, style, and beauty. She's a Bay Area transplant and has an MFA in Creative Writing from Columbia University. On a sunny New York day, you can find her hanging out with her mini schnauzer Isabelle Jellybean on a blanket in Central Park.
Wedding Planning and Decor
More From Wedding Planning and Decor