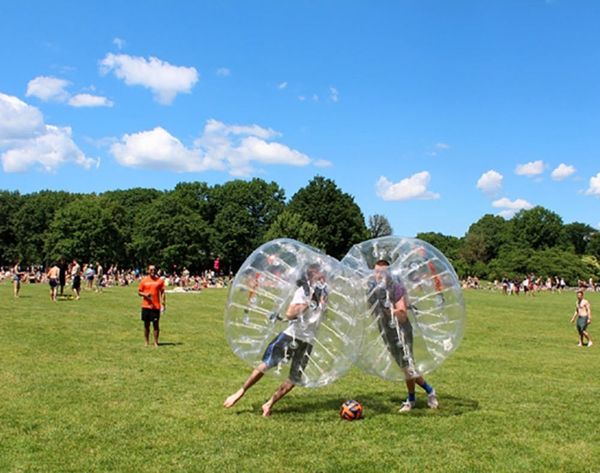 Look out, baseball, it looks like there’s a new great American pastime rolling in town. Or at least a good way to spend a summer afternoon with friends and some (but definitely not too much) beer. Featuring giant inflatable bubbles that look like something out of some ’90s game show, Bubbleball might be the coolest sport we’ve ever seen.

Bubbleballs are people-sized balls of plastic filled with air. There’s an opening for your head and your legs as well as some handholds within the structure itself. This means you’re super protected and can go ahead and get rowdy in the park :)

There are several ways to get into the Bubbleball game. The simplest one is probably Bubble Soccer, which is basically soccer played in giant inflatable balls and with way more contact. Bubble Baseball is a major middle school throwback that is essentially the bubbly version of kickball. You can also play Sumo Smash, Royal Rumble and Dog + Bone, all of which sound like a great way to pump up your next outdoor party. Hey, we’re all about creativity and innovation — yes, even in contact sports!

We’d love to see these at our next shindig. They’re a little on the pricey end at $229 per ball, but the company also offers rentals. Which gives us an idea for the next Brit + Co retreat…

Are you dying to play Bubbleball? What games would you make up with the equipment? Let us know in the comments.