This Portable Device Detects Gluten in Your Food 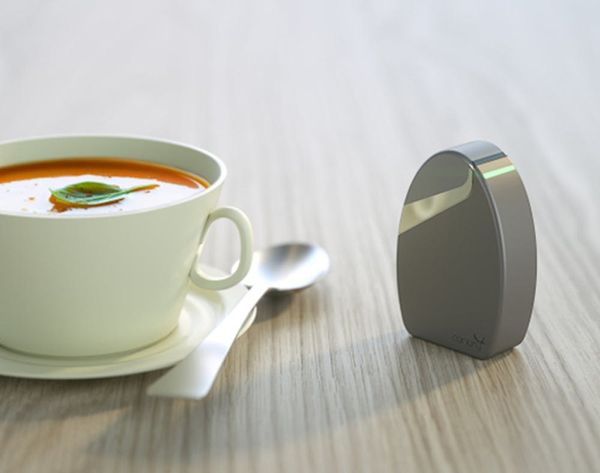 Are you one of the 15 million people in the U.S. with food allergies? If so, you know that eating at a restaurant can be difficult, or even impossible in severe cases. Thanks to a forthcoming portable allergen sensor called Canary, eating out might get a lot easier for those with allergies or sensitivities to certain foods.

The startup behind this genius idea (that just raised $4 million for said idea) is 6SensorLabs. According to their website, founders Shireen Yates and Scott Sundvor have “long struggled with celiac disease and other food allergies,” and were simply tired of constantly wondering if their food was safe to eat. They wanted to “bring clarity and trust back to the dinner table.” With that in mind, the first model of Canary will detect gluten, though the team hopes to be able to test for other food allergies as the company grows. We’re sure elementary school teachers will be lining up when they release a peanut version.

Canary may help you simply relax and enjoy yourself while out to dinner with your pals, allowing you to discreetly and quickly test for even the smallest bit of contamination — rather than assuming the worst by default. If your friend orders the Moroccan meatball appetizer for the table, you’ll know right after it arrives if you can have a gluten-free bite. We can also see huge applications for Canary in the food industry itself. Chefs can be 100% certain that they’ve avoided cross-contamination and that the food they are sending out of the kitchen is safe for their customers to eat.

TechCrunch reports that the device will come with a complementary mobile app to help users share the results of their tests and build a knowledge base about which restaurant items are safe for those with food allergies. The sensor will be available for less than $150 when it hits the market (6SensorLabs hopes to release Canary by early next year), but users will also need to purchase disposable testing strips or units.

Would you keep one of these on hand? Could you see Canary coming in handy for you or your fam? Let us know in the comments!

Annie D'Souza
Annie is the founding father and editor-in-chief of The Midwestival and a long-time jean-on-jean enthusiast.
Gluten-Free
Tech
Gluten-Free Paleo