Carrie Ann Inaba Opens Up About Wedding Planning, “DWTS,” and Life With Her Many (Many!) Pets 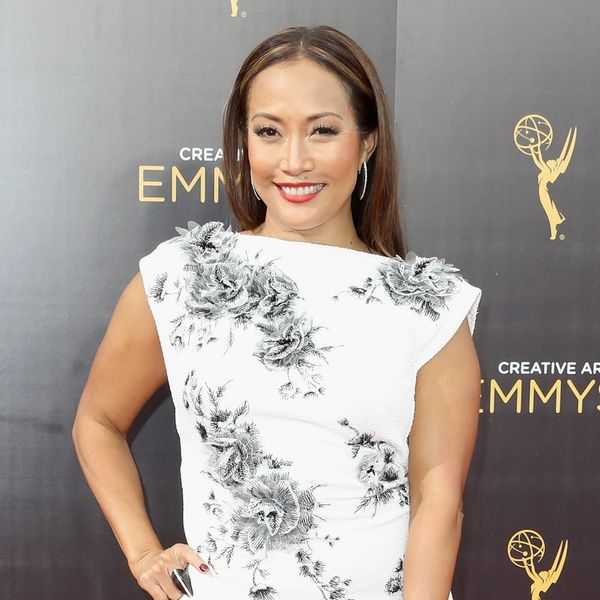 Carrie Ann Inaba has a very full house — and a very full plate. As she gears up for the next season of Dancing With the Stars, the veteran ballroom judge is also planning a wedding to fiancé Robb Derringer, running her Animal Project Foundation, and caring for her many pets, all of whom are rescues.

“I’ve always had cats,” she tells Brit + Co. “Since I was born, we always had at least two cats in the house. I, personally, got my first cat when I was 18 and living in Japan. She was the cutest little calico cat, and I named her Hang Ten. I actually had to sneak her onto the train to get her home, as I hadn’t thought it through and no pets were allowed on the train. So I put her in my bag and took her all the way home.”

Today, Inaba has three dogs and three cats, including Mimi, a special-needs cat; Reb, a formerly feral kitty; and Sophie, a five-month-old Blue Russian found by one of the TV star’s friends. “She brought her to me and I was originally going to take her to a rescue that I knew wanted kittens, but then Reb — Mr. ‘I Don’t Want to Talk to Too Many People’ — got up from the sofa, hugged her, and started kissing and cleaning her,” Inaba recalls. “So really Reb adopted Sophie.”

Inaba frequently posts pictures of her pets on social media, which recently led her to get involved in Royal Canin’s campaign for National Take Your Cat to the Vet Day. For every photo that cat owners share of their feline family members with #Cat2VetDay, Royal Canin will donate $5 to the charity Frankie’s Friends.

“Cats are so magical but they need us to be magical,” Inaba tells us. “I know they are stoic, independent creatures, but they need us, as cat owners, to practice preventive care and ensure they are healthy by taking them for annual check-ups and more often if they are sick.”

Inaba has a few tips (or, as she calls them, “cat hacks”) for making vet visits a little easier — including leaving the carrier out so your cats can get used to it; giving them treats on the ride over; and taking advantage of slow times at the clinic.

Between vet visits, of course, Inaba has a full schedule — especially with the new season of DWTS premiering in less than a month, on September 18. “I’m looking forward to seeing what kind of set-up we can do for the dancers. One of the things I love about our show is the fact that the producers are so creative with the choreography and the set-ups,” she tells Brit + Co. “When I choreographed my judge’s choice dance, we had rain, smoke, sand, trees, all this stuff. I love the production value. So I’m always excited to see what kind of creativity is going to come out of that show.”

The cast hasn’t been announced yet, but Inaba has a few names in mind. “I’ve said this before, but my dream contestant is Manny Pacquiao,” she says. “I’d also like to see someone like Lindsay Lohan. I think it would be really great for her.”

As for the other big date on her calendar? “The wedding planning is on, that’s for sure! It’s a lot more planning than I ever imagined it would be,” she shares. “I mean, I didn’t realize there were so many things to think about. But Robb is a wonderful partner and he is very much involved. It’s really a wonderful experience to be doing it together.”