Carrie Fisher’s Dog Gary Is (Kind of) in “Star Wars: The Last Jedi” 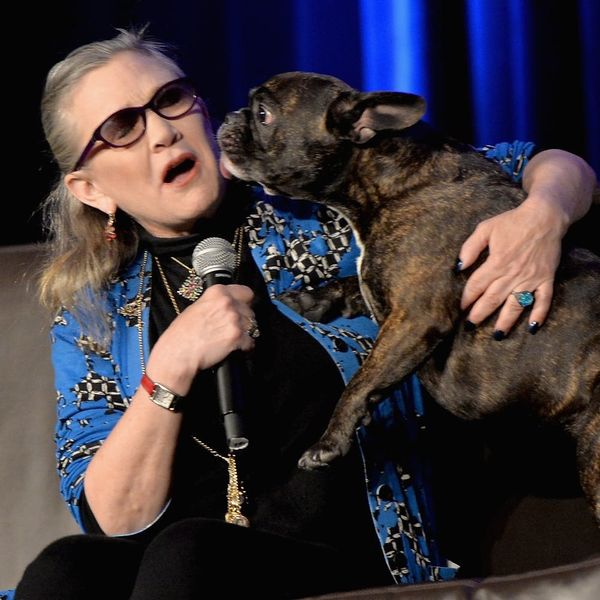 Before Carrie Fisher tragically passed away last December, she was often seen on the red carpet with her beloved French bulldog, Gary. The two shared a bond that fans adored. In celebration of that bond, director Rian Johnson added a tiny, touching nod to Gary in Star Wars: The Last Jedi, to honor the woman who played Princess Leia and to recognize her love of her furry friend.

It’s a detail that most people might have understandably overlooked, but one keen-eyed fan happened to notice it in a recently released still from the upcoming film.

In the still, John Boyega and Kelly Marie Tran stand facing each other in the foreground of what appears to be a casino of some sort. Directly behind them is another patron. There’s nothing especially remarkable about that figure alone (other than its non-human form, natch), but there is something interesting about what it’s holding.

Check out the little creature in the patron’s arms. Yep, that appears to be an alien version of Gary!

In order to confirm this adorable suspicion, Twitter user @irishgeekgirl tweeted at Rian Johnson. He replied with an enthusiastic, “YES! Wow, good eyes.”

While it’s unclear if Space Gary shares any scenes with Fisher (whose character is now known as the esteemed General Organa), we have no doubt that the actress’s fans will love this heartfelt addition to the already meaningful movie.

Star Wars: The Last Jedi will hit theaters on December 15, 2017, so be sure to get your lightsabers ready and prep yourself for a Space Gary spotting!

What do you think about the tribute to Gary in Star Wars: The Last Jedi? Let us know @BritandCo!