4 Celebs Who Made “Bathleisure” Style Happen 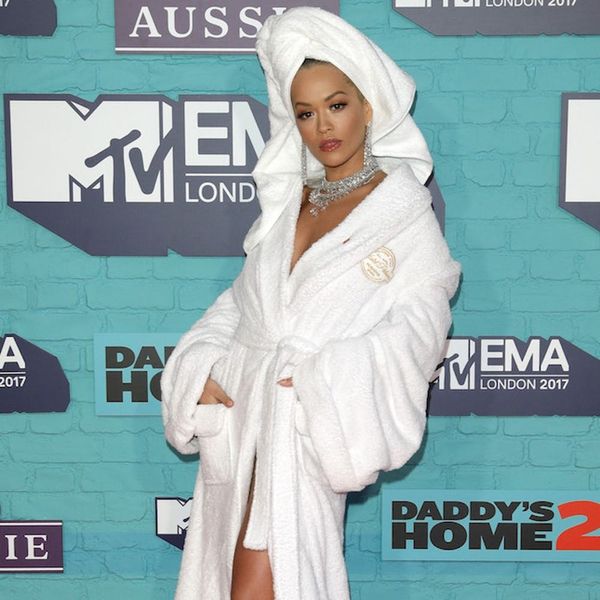 In the latest installment of “Those Crazy Celebs, What Will They Do Next?” comes a fashion movement we can totally get behind. It’s called “bathleisure” and it’s exactly what you’re thinking. Yup, towels and bathrobes are officially fashion items. Don’t believe us? Just ask Rihanna, for one.

Everyone’s favorite bad gal guest edited the current issue of Vogue Paris, and in one of three covers, RiRi is resplendent in a fluffy yellow topper and a towel wrapped around her head. That just-got-out-of-the-shower look? It’s high fashion now. If Rihanna and Emmanuelle Alt say it’s a thing, it’s a thing. Don’t question it. (Photo via Vogue Paris)

Another star who went for the trend recently? Rita Ora, who made her EMA red carpet appearance in full bathleisure including hotel spa-worthy robe and towel, complete with lots of diamonds and sparkly heels. Who knew our getting-ready look was actually ready all along? (Photo by Andreas Rentz/Getty Images for MTV)

Bath time and diamonds just seem to go together, it would appear. Taylor Swift’s “Look What You Made Me Do” video featured Tay Tay literally up to her ears in diamonds — a reference that was full of hidden meaning because, obviously.(Photo via Taylor Swift VEVO/YouTube)

Of course, we must take a moment to bow down to the Queen of Bathleisure, Mariah Carey. This woman loves her some luxurious tub time — and all the robes and diamonds that come with it.

Here she is treating her fans/”lambs”/Insta followers to a festive Valentine’s Day visual treat. If you don’t bathe with balloons and confetti, did you even actually bathe?

No, seriously, balloons and confetti (and Sweethearts) are the new bubble bath. See example.

And naturally, it all started with Mariah’s episode of MTV Cribs, which is basically the stuff of legend. If you’re unfamiliar with this gem or just in the mood to treat yourself, feast your eyes here. And then go slip into something more comfortable, darling.