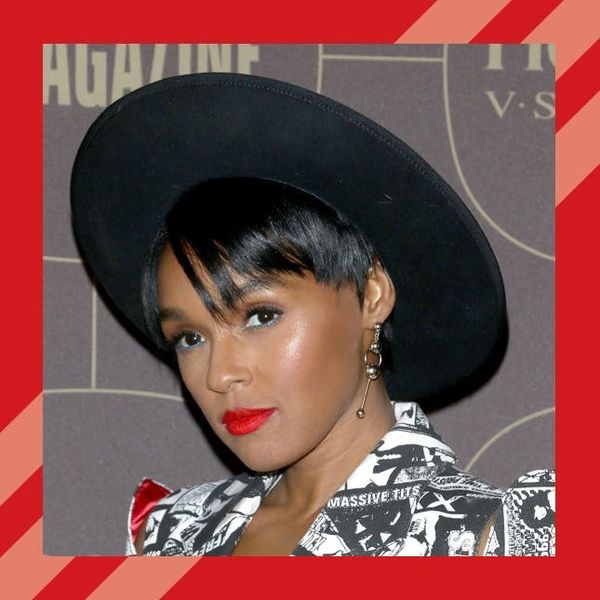 If we've learned anything from A-list events and street-style snaps so far, one thing is clear: 2018 is the year of the hat. Celebs and the style set alike have been wearing statement toppers of every variety since we said goodbye to 2017. Looking to master the trend for yourself? Worry not, because we searched high and low for this year's celeb-approved hat picks, including classic fedoras, trendy newsboys, and the French girl-approved berets. Scroll to see how celebs, including Beyonce and Chrissy Teigen, have made the accessories their own.
Beret Bey: Somehow Queen Bey looked even more glamorous than usual at this year's Grammy Awards. During her impromptu Insta shoot, the bombshell singer rocked a gorgeous Eugenia Kim beret before switching her headwear up for the main event. (Photo via @beyonce)
Eugenia Kim Carter Leather Beret ($295)
Hat Trick: We have major star eyes for Janelle Monae. Need proof? Just watch her new music video for “Make Me Feel” because it embodies all the funky stylishness the world needs right now. Her headwear throughout is absolutely on point, making us want to say yes to all the hats. We're especially feeling this pick that Monae rocked at a Pre-Grammy celebration. Pair yours with prints, crimson lips, and plenty of 'tude. (Photo via Jim Spellman/WireImage)
Brixton Mayfield II Fedora ($58)
Capwalk: Kaia Gerber took to the streets of NYC in her Supreme beanie, '90s shades, and Doc Martens. (Photo via Raymond Hall/GC Images)
Supreme Rubber Patch Beanie ($32)
Baker's Dozen: Bakerboy hats are *everywhere* right now — just take it from Karrueche Tran and pair it with your go-to jeans and cropped sweatshirt. (Photo via PG/Bauer-Griffin/GC Images)
ASOS High Crown Wool Baker Boy Hat ($26)
Rare Vinyl: Plastic is back, and with it all the shiny, crinkle-tastic clothing a girl could ask for. Just check out Bella Hadid's street style during NYFW that featured matching pants and hat. (Photo via Gotham/GC Images)
Alexander Wang x Kangol Peebles Cap ($116)
Throwing Shade: This Chrissy Teigen-approved wide brim fedora ensures UV protection and, in the word's of Derek Zoolander, is just "really, really, ridiculously good-looking." (Photo via Gotham/GC Images)
Janessa Leone Deux ($207)
Good News: These Gatsby-style hats go by many names — bakerboy, newsboy, bandit cap — but whatever you call them, they don't disappoint. Take it from Kristen Bell and add a cap to your daily denim and sweater duo. (Photo via BG017/Bauer-Griffin/GC Images)
ASOS High Crown Wool Baker Boy Hat ($26)
Tip of the Hat: If there's anything the KarJenner sisters are known for, it's drama — and style. Dress like a Kardashian (specifically a Khloe) and try a fedora that even Pharell would approve of. (Photo via BG022/Bauer-Griffin/GC Images)
Maison Michel Virginie Fedora ($579)
French Girl Fashion: Singer and actress Vanessa Hudgens was recently spotted looking Frenchy AF, and we're feeling some serious copycat vibes, starting with that adorable beret. (Photo via Kevin Mazur/Getty Images for DirecTV)
Le Beret Francais Ecojean Beret ($18)
All Aboard: We're loving Rosie Huntington-Whitely in head-to-toe plaid, white pumps, and that commandingly cool, conductor's cap. (Photo via Raymond Hall/GC Images)
Zara Faux Leather Nautical Cap ($26)
Panama Jill: Priyanka Chopra knows how to pull off the unexpected when it comes to fashion. She was recently seen wearing camo pants and a dark brown Panama hat, and we've been searching for both (to wear together) ever since. (Photo via Tibrina Hobson/Getty)
Urban Outfitters Structured Brim Felt Panama Hat ($44)

Will you be the wearer of many hats this year? Follow us on Pinterest for more celebrity trendspotting and style inspo!

Will you be the wearer of many hats this year? Follow us on Pinterest for more celebrity trendspotting and style inspo!