Women With Barely-There Hair Are Having a Moment 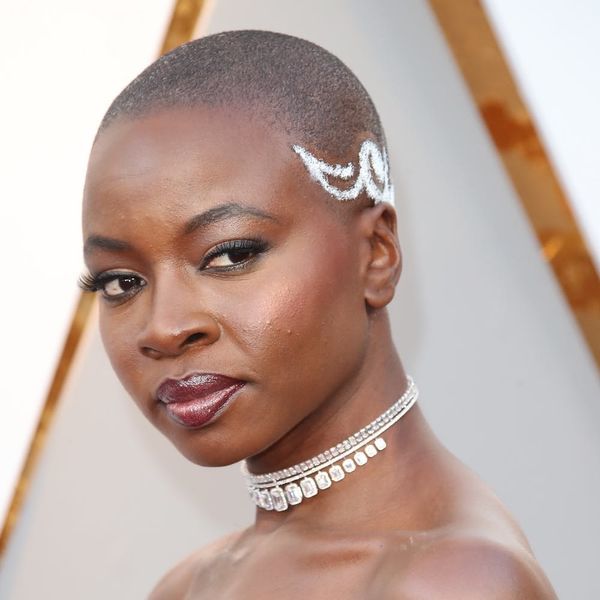 The phenomenal success of Black Panther may be prompting “Wakanda Forever” salutes from athletes everywhere these days, but it’s also inspiring a whole slew of short, buzzed, cropped hairstyles, thanks to two of the film’s leading ladies: Lupita Nyong’o and Danai Gurira. The actresses rocked all of the red carpets during awards show season in one head-turning short-haired coif after another.

“Barely there hair is such a big trend right now culturally,” says celebrity stylist Larry Sims. “African American women are stripping down what society might perceive as beautiful (e.g. wigs and extensions) and embracing their natural looks, which screams resilience, strength, confidence, and beauty.”

If you’re thinking about going under the scissors or razor, take a little inspo from the women making #ShortHairDontCare a beauty movement that’s here to stay. (Photo via Christopher Polk/Getty)

If anyone knows a thing or two about Lupita Nyong’o’s hair it’s Sims himself, since he’s worked with the actress. “By creating different variations of barely there hair, she revolutionized how African American women look at themselves and paved the way for so many others,” says Sims. As for which products to turn to for the Lupita look, Sims always has Smooth ‘N Shine Conditioning Polisher ($4) on hand. “It gives a brilliant shine and finish to such a standout ‘do,” he explains. (Photo via Rick Rowell/Getty)

Danai Gurira was a showstopper at the Oscars this year when she arrived red-carpet ready in this statement style. Her buzz cut design — which her stylist hand-painted with white eyeliner — was inspired by African ancestral tribal face paint and had everyone praising its uniqueness and history lesson in one. According to Sims, the hairstyle also works because it makes her features stand out even more, with nothing to distract from them. “It’s extremely bold and sexy and shows she’s not afraid to take risks,” he says. To get her Gurira’s look, try using Stila Cosmetics Stay All Day Waterproof Liquid Eye Liner in Snow ($22). (Photo via Dan MacMedan/WireImage)

One of the hottest short hairstyles in Hollywood right now belongs to Zoe Kravitz, with her pixie ‘do. “This cut looks unbelievable on her,” says Sims. “Not only is it complementary to her chiseled visage (hello, those cheekbones), but the texture screams free spirit, which fits perfectly with her personality.” To recreate the Big Little Lies star’s effortlessly cool look, spritz a volumizing product like Ouai Volume Spray ($26) throughout your strands for long-lasting lift and bounce that just won’t quit. (Photo via George Pimentel/WireImage)

Tousled yet chill, modern yet classic, Greta Gerwig’s sideswept short style is definitely a winner. To create Gerwig’s look, celebrity stylist John D used Tresemmé Extra Hold Mousse ($5) on towel-dried hair, created a side part, and blew it dry with a diffuser, scrunching along the way. Then he created a finger wave pattern with a comb, applied a dime-sized amount of Malin & Goetz Sage Styling Cream ($8) for light definition, and finished with Kristin Ess Depth Defining Water-Based Pomade ($10) around the hairline to control flyaways. (Photo via Steve Granitz/WireImage)

Following in the footsteps of trailblazers like Grace Jones and Iman, Alek Wek is arguably one of the most famous editorial fashion models known (and booked) for her short — often shaved — hair. “Wek has been growing her hair out more in the last few years, but her iconic look we have grown to know and love centers around the classic buzz cut,” says Lacy Redway, celebrity stylist for Nexxus. Another bonus of going this short is there’s not a lot of upkeep to deal with. Redway suggests using oils like Jane Carter Solution Nourish and Shine ($22) to keep both your skin and hair moisturized. (Photo via Peter White/Getty)

Notorious for her long blonde locks, Kate Hudson recently transitioned from a buzz cut to a sassy pixie. “I love that she can do anything with her hair and still look amazing,” says Redway. To get Hudson’s style, you need something lightweight that won’t weigh hair down before styling, like Redway’s personal fave, Nexxus Hydra-Light Leave-in Foam ($20). “This is great before blow drying or air drying,” she adds. (Photo via Axelle/Bauer-Griffin/FilmMagic)

Similar to Kravitz, Ruth Negga is her best self in a low curly pixie. According to Redway, the haircut looks good on her because of her petite stature and gorgeous features, and it allows her to show them off instead of hiding behind a lot of hair. Style this ‘do by applying Smooth ‘N Shine Intense Moisture Coil Hydrating Butter ($5) to enhance the waves all over. (Photo via Mike Marsland/Mike Marsland/WireImage)

Another model who can’t get enough of the feminine, fringy pixie? Leila Nda. According to Julie Dbjay, stylist at Frédéric Fekkai Fifth Avenue Salon, there are lots of versions of the pixie that can work for everyone’s face shape and hair texture. In Nda’s case, “Her face shape is ideal for a short cut and this one accentuates her beautiful bone structure,” explains Dbjay. Plus this ‘do can be styled in different ways: with a side part, slicked back, or with bangs. (Photo via Michael Stewart/FilmMagic)