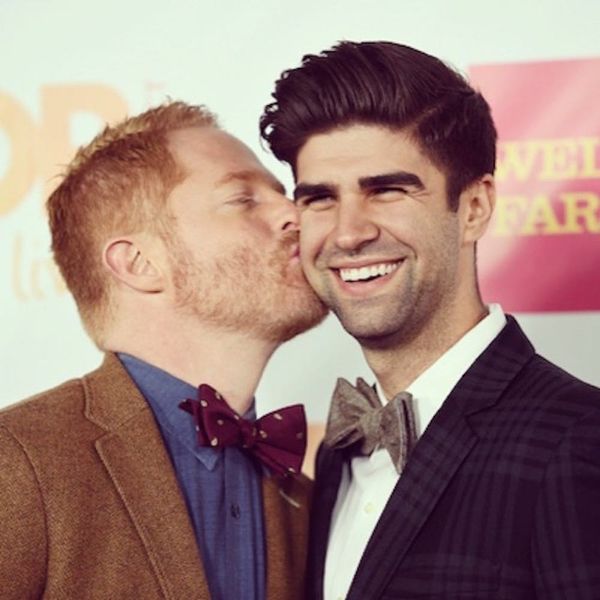 Yesterday’s landmark ruling that legalized gay marriage in all 50 states broke the Internet in the best way. The love was tangible. Our news feeds, Instagram feeds and Twitter feeds were blowing up with the hashtag #LoveWins. People were celebrating in every which way — in the streets (a Pride Week warm-up!), raising a glass and even watching movies featuring groundbreaking LGBT voices. It was truly a remarkable moment in history, and celebs were as proud and inspired as the rest of us. Here’s some of our favorite Instagram photos that celebs posted to celebrate the epic win for equality.

1. @elizabethbanks: The Hunger Games star posted this hilarious image of SCOTUS with the five who voted in favor of the legalizing gay marriage in rainbow robes. She captioned it: “5-4 ruling: Men 4-2 against, Women 3-0 for.  Progress. Leadership. PHEW! #LoveWins”

2. @nph: Neil Patrick Harris posted this adorable snap of him with his hubby, David Burtka, showing off their wedding bands on a beach. The captions is simple. It states in no uncertain terms: “Love Wins.”

3. @caradelevingne: The supermodel, whose relationships with St. Vincent and Michelle Rodriguez have made several headlines, took a picture of the Pride parade happening in London today and captioned it: “Pride #LoveWins #Equality”

4. @madonna: Our favorite Material Girl posted a screenshot from her 1990 Rock the Vote ad which featured her, an American flag and two gay dancers singing and dancing as they encourage voters to cast their ballots. She captioned it: “Love always wins! Then and Now! #revolutionoflove #livingforlove”

5. @mileycyrus: Miley posted lots about yesterday’s decision, but this one of the star wearing a “Gay O.K.” pin is our favorite. The singer, who recently came out as genderqueer, captioned her image: “What a great day!!!!! #gayok #loveisthelaw Thank you America for not cutting my chances of finding true love forever and ever by 50%.”

6. @ladygaga: The Monster Ball singer has always been an outspoken LGBTQ advocate. She took to her Instagram to congratulate her many “little monsters” with this pic. She wrote: “#lovewins over prejudice.”

7. @lancebass: The former NSYNC member posted this adorable photo celebrating his marriage to his actor/painter husband Michael Turchin in honor of yesterday’s ruling. He captioned it: “We are so proud to be American today! All of our #LGBT brothers and sisters can now love freely! Thank you #SupremeCourt for doing the right thing.”

8. @mindykaling: The Mindy Project star, who recently celebrated a birthday, posted a much subtler, but still powerful image of a rainbow cloud. She had only this to say: “Whoa.”

9. @jessetyler: Jesse Tyler Ferguson also celebrated his marriage to lawyer husband Justin Mikita of almost two years with a sweet pic. The Modern Family star wrote: “On July 20th we celebrate our 2 year wedding anniversary. Today, I am so happy that all Americans have the right to marry who they want to marry. #lovewins”

10. @laurenconrad: Lauren Conrad had a sweet (literally!) message to everyone for her response. She posted this pic of two rainbow sour belts as the equality sign. Clever! She had this to say: “What a beautiful day… #lovewins.”

11. @ianmckellen: The 76-year-old actor took to the streets to celebrate the landmark decision. The happiness in this pic is electric. He wrote: “Joining the fun @NYCPride, last night’s rally. Richard, Derek and I #selfie on stage for @Pbsofficial #vicious.” Slay, Ian McKellen, slay.

12. @whododatlikedat: OITNB star Samira Wiley shared this adorable text from her mother with her fans. We think it’s the absolute sweetest! She captioned it: “Moms knows what’s up.”

Did you post an Instagram celebrating yesterday’s ruling? Let us know in the comments below!
Kimberly Wang
Kimberly Wang writes about all things pop culture, tech, style, and beauty. She's a Bay Area transplant and has an MFA in Creative Writing from Columbia University. On a sunny New York day, you can find her hanging out with her mini schnauzer Isabelle Jellybean on a blanket in Central Park.
LGBTQ
Home News
LGBTQ