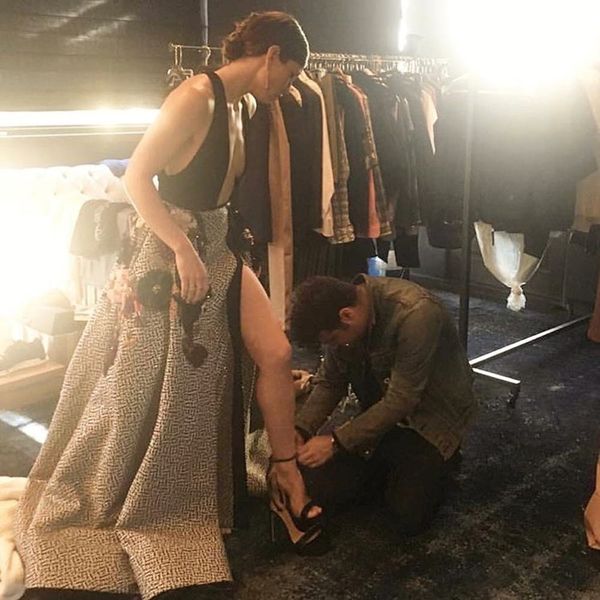 On the red carpet and IRL, celeb style is pretty lit (and let’s be real: It kind of has to be). But, unlike those of us who need Instagram and Pinterest to gather inspo, celebs have a whole team behind them ensuring their #OOTD is always on point (maybe enlisting the help of a pro should be #1 on our list of 2017 style resolutions — if only). Who do celebs turn to for next-level looks? A visionary stylist, that’s who. Below, we’re introducing you to 15 stylists responsible for your fave celeb’s (think: Emma Watson, Kendall Jenner and Chrissy Teigen) killer red carpet and everyday outfits. Ready that pointer figure — you’ll want to add these innovators to your follow list STAT before the Oscars rolls around.

1. Sarah Slutsky: To say Sarah Slutsky makes our hearts flutter would be an understatement. When she’s not styling the likes of Emma Watson, Garance Doré and Elizabeth Olsen, you can find her jet-setting and owning the girlboss thing at her startup Cinematique, where she acts as VP of Special Projects. Our favorite part of her feed? Sarah does more than post pics of her starry clientele — she constantly shares sneak peeks of her own adventures and style. Brace yourselves for plenty of covetable duds from emerging (and surprisingly affordable) designers.

2. Rob Zangardi & Mariel Haenn: Lily Collins, Jessica Biel, Hailee Steinfeld and Cara Delevingne are just a few of the celebs this stylish duo have dressed. Not bad, right? Consider their feeds one-stop destinations for swoon-inducing ensembles and loads of behind-the-scenes pics you won’t find anywhere else. (And don’t forget to follow Mariel @marielwashere.)

3. Petra Flannery: Ever wonder how Emma Stone manages to slay every time she steps foot on the red carpet? Introducing Petra Flannery — the force behind the starlet’s show-stopping getups. She also works with goddess-in-training Zoe Saldana, as well as Amy Adams.

4. Monica Rose: The California native started her career in fashion working at a mall near her hometown and has indisputably become one of the most influential stylists in Hollywood, dressing the likes of Kendall and Kylie Jenner, Khloe and Kourtney Kardashian, Gigi Hadid, Chrissy Teigen, Cindy Crawford, Kaia Gerber and Chanel Iman. To boot, Monica has a following of 1.2 million followers on Instagram, where she shares photos of her latest work and behind-the-scenes pics.

5. Kate Young: Chances are pretty good that you’ve already seen stylist Kate Young’s work. The Brooklyn-based stylist is responsible for the wardrobes of some pretty big names: Sienna Miller, Dakota Johnson, Margot Robbie, Michelle Williams, Natalie Portman and Selena Gomez, to name a few (NBD, right?). Let’s just say she’ll have her work cut out for her during awards season — which is exactly why you’ll want to start following her on Insta, like yesterday.

Golden Girl in Bronze Gucci. I'm grateful for this little ray of sunshine. And she always lets me sneak in a little glamour shot. This #bts is from our shoot for The Hollywood Reporter Beauty Issue celebrating Elle's makeup artist Erin Ayanian Monroe. I feel so lucky to be part of an amazing collaborative team. Shout out to Jenda Alcorn for all the amazing hair styling. This photo and styling by me.

7. Elizabeth Stewart: Elizabeth Stewart is the queen of the celeb selfie, and you’ll find her Insta feed packed with impromptu pics with industry heavy-hitters such as Julia Roberts, Jessica Chastain, Cate Blanchett and Amanda Seyfried. Despite her impressive A-list clientele, Stewart gives off goofy, down-to-earth vibes that keep us coming back for more.

8. Law Roach: Introducing Zendaya’s secret style weapon: Law Roach. Known to be a risk taker on the fashion front, he’s created quite the portfolio for himself, tending to the fashion needs of Ariana Grande, Skai Jackson, Ruby Rose and, more recently, Celine Dion. In addition to his work as a stylist, Roach is the co-creative director of Zendaya’s shoe line Daya and recently scored a gig as a judge on America’s Next Top Model.

9. Karla Welch: Remember Felicity Jones’s dreamy The Theory of Everything promotional wardrobe (Balenciaga, Saint Laurent, Dior — the list goes on)? It was all Karla Welch. Since then, she’s become the right-hand woman for Ruth Negga and Katy Perry. A few of her other clients include Michelle Monaghan, the Biebs and Olivia Wilde.

#regram @worldarmarium -- Cristina Ehrlich joins the Armi! Our newest Style Brigade member is ranked number 2 on the list of the 25 most powerful stylists in Hollywood - boasting VIP celebrity clients like @BrieLarson, @Penelopecruzoficial and @AnnaKendrick47 #JoinTheArmi #celoves

11. Leith Clark: To whom does Keira Knightley entrust her style? None other than Leith Clark. But stylist isn’t the only title she owns — Leith is also Harper Bazaar’s Style Director at Large, founder of Lula magazine and Editor-in-Chief of The Violet Book. Yeah — she’s basically a business.

Congratulations, Meryl! You are an inspiration to us all ❤️✨

12. Micaela Erlanger: It was Micaela Erlanger who dressed icon Meryl Streep the night she delivered that riveting speech at the Golden Globes. The stylist has developed a rep for putting celebs in getups that are picture-perfect and unforgettable, including the $150,000 custom Calvin Klein gown Lupita Nyong’o rocked at the 2015 Oscars (which was later stolen from her hotel room and then returned). Other famous clientele includes Jared Leto. Check out her feed for pics of enviable accessories, celeb selfies and behind-the-scenes snaps.

13. Rebecca Corbin-Murray: Couture gowns, dreamy sets, It girl-approved accessories and seemingly endless celeb pics are what you’ll find scrolling through Rebecca Corbin-Murray’s feed. Familiar faces that pop up frequently include Emma Watson, Lily James, Sophie Turner and Jenna Coleman, whom she works with on the regular.

When you have to go accept @billboard 🌟🌟🌟WOMAN OF THE YEAR 🌟🌟🌟Repost from @madonna @TopRankRepost #TopRankRepost What it Feels Like For A Girl! 💁😎👑 ! BillBoard Awards Here I Come! 🎉💘😂🍾

14. Arianne Phillips: This twice Oscar-nominated costume designer is the real deal. But beyond her work for films such as Kingsman: The Secret Service, Walk the Line, W.E. and A Single Man, Arianne’s well known for her long-standing relationship with Madonna, and is often the creative force behind her photo shoots, music videos and tour costumes.

15. Leslie Fremar: Pure, unadulterated glamour is what Leslie Fremar does best, which is probably why A-listers such as Charlize Theron, Jennifer Connelly, Reese Witherspoon and Julianne Moore frequently seek out her style expertise for red carpet events.

Libby MacCarthy
Libby MacCarthy is an urban planner turned writer with a love (bordering on unhealthy obsession) of all things fashion and beauty related. She lives for perfectly brewed coffee, farmer's markets, dinner parties and perusing impeccably designed boutiques. When she's not on the hunt for the latest trends, you'll likely find her plotting her next adventure or nose deep in a book. Libby currently splits her time between the East Coast and her adopted home of France. Follow her daily adventures on Instagram.
Celebrity Style
Celeb Style
Celebrity Style
More From Celeb Style