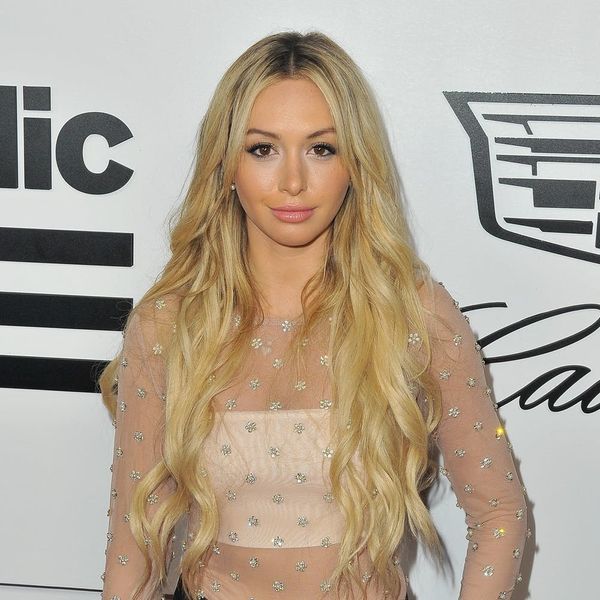 Corinne Olympios’ romantic life certainly hasn’t cooled off since she competed for Nick Viall’s heart on The Bachelor. After a brief engagement to an ex-boyfriend after the show ended, she now has a new man in her life — and it sounds like things are going well.

“I am dating someone right now,” the 25-year-old revealed to People in a new interview. “I’m really happy about it.”

Olympios said she met her new guy when they were set up by a mutual friend. And the matchmaker might even be someone we know. “It was a set up from a friend. A reality TV friend,” she teased. She didn’t specify who it was that made the love connection, but we can’t help wondering if it was DeMario Jackson, whom Olympios bonded with following the infamous Bachelor in Paradise season four scandal.

Olympios also declined to name her new boyfriend, but she did spill a few details about him, telling People, “He’s … hilarious, which I need. I need someone funny. My past relationships, they didn’t laugh at funny things.”

Unfortunately, her new guy isn’t a SpongeBob SquarePants super-fan like she is and doesn’t watch the show with her, but he appreciates her appreciation. “He’s okay with me making SpongeBob references and laughing with me about them,” she said. “Past guys I’ve dated were like, ‘Ew. That’s so immature.’ It’s like, ‘C’mon just laugh about it. Be cute for a second. You’re so boring!'”

She added one more adoring detail about her man — “I just think that he is so caring and so supportive of me” — before deciding that it might be best to leave things there. “I just feel like I’ve been through so much with relationships in this past single year that I need to take it in my own slow pace,” she said. “And when I’m ready — you know I’m not hiding anything — pictures will start popping up, but I’m just not going to blurt it out to the world just yet.”

While we’ll definitely be watching for a peek at the new couple, we’re also curious about what a happy relationship means for her future with Bachelor Nation. When asked if she ever sees herself back on the reality show, she told People, “I have no bad relationship with the Bachelor family, so I mean, I don’t really know. Whatever is to come is to come, and I’ll decide at the time.”

Would you like to see Corinne Olympios turn up on another Bachelor Nation show? Let us know @BritandCo!