Corinne Olympios Would Be Willing to Give Nick Viall Another Chance 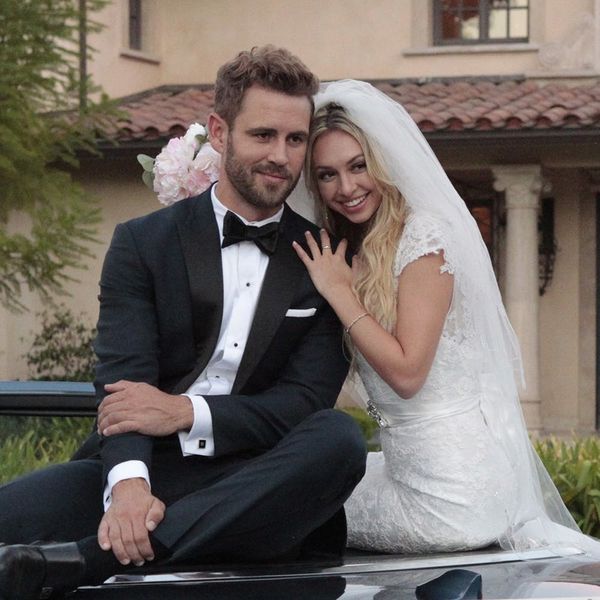 Corinne Olympios may have a new Bachelor Nation BFF in DeMario Jackson, but it looks like she hasn’t totally written off her former flame Nick Viall. In fact, she said she’d be willing to give the newly single two-time Bachelorette runner-up a second chance… under one condition.

Olympios isn’t sure she would date Viall as he is now, but she told Entertainment Tonight, “If I saw him getting back to the way he was when I first stepped out of the limo [on The Bachelor], I would seriously consider giving him a chance. I would meet up with him, have coffee, talk to him, and see how he is. He just broke up with his fiancée [Vanessa Grimaldi]; it can’t be easy.”

Olympios wouldn’t let him off the hook completely, though — she still thinks he made a “huge mistake” in not choosing her. In case you need a refresher, Viall sent the cheese pasta-loving Florida native packing after the hometown dates.

“We clearly had strong chemistry; I was falling so hard and I remember when he changed completely,” she told ET. “I went up to him, cameras not rolling, and was like, ‘I just want to give you a hug before the night ends,’ which is something we normally did. He was like, ‘K, well, I’m gonna go give out this rose now.'” She knew then that something wasn’t right. “It was a slap in the face, like, ‘I’m too busy for you right now.’ I don’t know why he got like that. … I feel like [in the beginning] I saw a different side of him than what [he] shows right now.”

Viall ultimately proposed to Vanessa Grimaldi on the season finale, which aired back in March. But by August, the two had called off their engagement.

So, is there a chance Olympios and Viall will indeed reunite? Well, at the moment, she’s more interested in her friendship with DeMario Jackson. Despite (or maybe because of) the fact that they got caught up in a controversy during season four of Bachelor in Paradise, the two are now closer than ever. “We’re really good friends and just hang out a lot,” Olympios told Us Weekly about their relationship. “It’s really good that we could just be friends and have no worries about any drama or anything like that.”

In fact, Jackson told Us Weekly, “We’re extremely close. We talk, like, every day. We hang out. We do things that friends do.” He also noted that Olympios is “the most drop-dead gorgeous girl in the world.”

Could you see Corinne Olympios and Nick Viall together as a couple? What about Olympios and DeMario Jackson? Let us know @BritandCo!