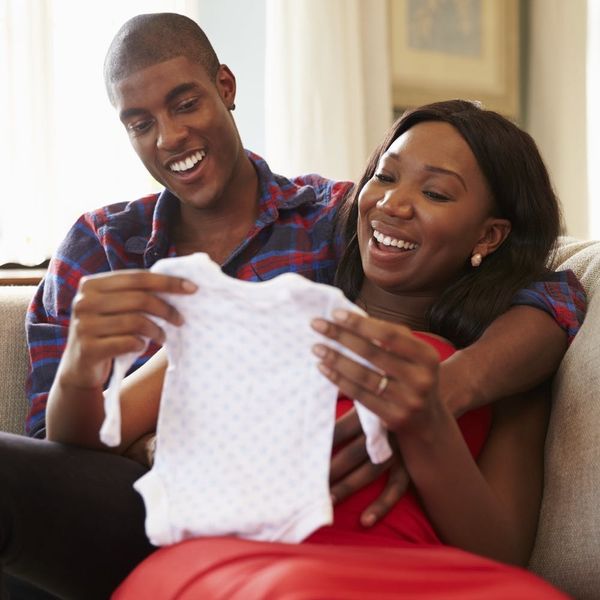 There’s a diaper cake in the middle of a bassinet-shaped table. It’s surrounded by a not-so-subtle mountain of fabric that reminds you of an unraveled tutu. There are plastic bottles (and not the wine kind) hung from the ceiling like a garland and a ready-to-topple-over tiered shelf of tea sandwiches in the corner. Yep, this is your baby shower — and the guys are there too? Couples baby showers are growing in popularity, but that said, you’re not sure if it’s for you. Check out seven reasons to have a pre-baby bash with the girls and their guys!

1. You say a big old “no” to tradition. You weren’t a white dress, strut down a mauve-draped aisle kind of girl. And now you aren’t into doing all of the traditional baby things. While you were perfectly okay with celebrating your BFF’s baby-to-be with storks and bunnies, it’s just not for you. You need a more modern approach — and that’s what a couples shower gives you.

2. Sharing is caring. You want your baby daddy to take part in every step of the process. From the first whoosh of a heartbeat to the birth day, you want to share your pregnancy with your guy. When he’s ultra into every moment of those nine months, inviting him (and some of your other male friends) to the shower is totally in order. Leaving him out may make your hubby or boyfriend feel, well, like he’s left out. Don’t risk it at this one-of-a-kind time. Invite him along.

3. It’s a family affair. Nothing is more important to you than family. Every second, third and fourth cousin is invited to your shower, along with your husband’s seven sisters and their cousins. Family is a major part of your life, making it almost essential to invite them all (including the guys) to celebrate the newest member.

4. He asked. Maybe he’s the not-so-traditional one or maybe he just really, really wants to see what goes on behind the scenes of a baby shower. Whatever the reason, if your man asks to come along, seriously consider it. He’s asking for a reason — and you should appreciate that.

5. He needs to get involved. You’re beginning to think that he’s actually forgotten you’re having a baby. The bump is there. The house is filling with itty bitty little clothes. So, why is he ignoring what’s clearly about to happen? He could be scared. He could be stressing. Or, he just has absolutely no idea what he’s supposed to do. Let him in on the big baby secret (or, at least the girly games that go on during a shower), and invite him into your inner circle!

6. He needs a dad tribe. There’s only so many, “What’s a onesie?” and “How does a diaper work?” types of questions that one person can answer. Your guy has no idea what to do with a baby and desperately needs a guide — a man guide. A couples shower provides a perfect opportunity to hook your almost-baby daddy up with your other daddy friends.

Erica Loop
Erica Loop is a freelance writer living in Pittsburgh. When she's not busy creating kids' activities for her blog Mini Monets and Mommies, you can find her trying to hang out with her teenage son, being chased by her two Olde Boston Bulldogs or teaching a children's karate class (she's a third degree black belt!).
Baby Shower
Parenting
Baby Shower Parenting Pregnancy
More From Parenting