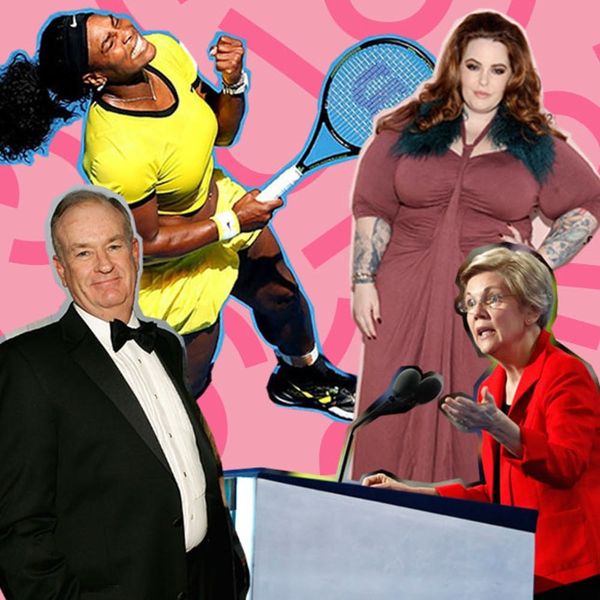 Welcome to the inaugural edition of Dame’s Digest, a new weekly series recapping the week’s biggest stories in women. In an era that’s equal parts confusing and empowering, consider this your weekly debrief on everything from the most notable political headlines to feel good moments that remind you just how powerful women are.

After multiple sexual assault allegations, Fox News actually fired Bill O’ Reilly. Earlier this month the New York Timespublished a piece revealing that Fox News and 21st Century Fox settled five sexual harassment cases on Bill O’ Reilly’s behalf over the years. The agreements totaled about $13 million. Immediately after this news broke, 50 sponsors pulled ads from “The O’ Reilly Factor.” Considering O’ Reilly is the top-rated host in cable news, it was unclear how Fox would choose to respond, especially after the chairman of Fox News was ousted last year for similar accusations.

Ultimately, the decision was in the hands of the Murdoch family, which controls 21st Century Fox. They decided ‘O Reilly should be fired. On Wednesday, James Murdoch stopped to answer a question about the decision at an event in NYC. According to the New York Times, he told reporters, “We did a thorough investigation, a thorough review, and we reached a conclusion. Everything that we said in our statement is all you need to know.”

‘O Reilly has been on vacation in Italy while the events unfolded this week, but he still managed to put out a statement yesterday after the news broke of his firing. The TV host says it is “tremendously disheartening that we [Fox News] part ways due to completely unfounded claims.” (Photo via Getty)

Hey @uber I don't pay more to use your "black car" service to be told that there's no way I could possibly be healthy because I'm fat & then questioning it. No one should have to tolerate this at any level of the services you offer. I'm fat. I also have a fat wallet & will no longer be using your services. Ever. Also after I told him I was healthy he turned the radio off & changed the subject. #putmymoneywheremymouthis #uberdriver #uber Edited to add: saying my driver is fat was obviously being used as a descriptor & not to insult him. Also I did not show his face or use his name when filming, it was to be able to show what I deal with daily & why this behavior is unacceptable from anyone.

Tess Holliday clapped back at a fat-shaming Uber Driver. Oh, Uber. 2017 is just not your year. The company has been in PR crisis after PR crisis over the past few months. The newest controversy comes straight from the mouth of supermodel Tess Holliday. Holliday first made major headlines a few years back when she became the first woman of her size to be signed to a major modeling agency. Holliday took to Instagram yesterday to share an offensive interaction she had while using the service. She writes, “Hey @uber I don’t pay more to use your ‘black car’ service to be told that there’s no way I could possibly be healthy because I’m fat & then questioning it. No one should have to tolerate this at any level of the services you offer. I’m fat. I also have a fat wallet & will no longer be using your services. Ever.”

Serena William’s announced she’s pregnant – and was also pregnant when she won the Australian Open. Yesterday Williams sent the Internet into a tizzy after posting a pic of her belly on Snapchat that said, “20 weeks.” The Internet collectively did the math and realize she was two months pregnant when she won her 23rd Grand Slam singles title at the Australian Open in January. Slay, Serena. If you need us, we’ll just be over here daydreaming about how epic Williams and Beyoncé’s baby playdates will look like. (Photo via Getty)

Elizabeth Warren released a new book. Watch out world, Elizabeth Warren is on a book tour. The Massachusetts Senator has been making headlines pretty much non-stop since Donald Trump’s presidential win. She canned the new feminist mantra “She persisted” thanks to a tense exchange with Senator Mitch McConnell and wasn’t afraid to ask Betsy DeVos the hard questions during her confirmation hearing earlier this year. Taking her call to action one step further, Warren has just released a new book titled, This Fight Is Our Fight: The Battle to Save America’s Middle Class. It’s not a memoir (she already has one of those), but rather a book what dangers the middle-class faces and how to save it.

Senator Jeff Flake is helping to defund Planned Parenthood and this 16-year-old teen is having NONE. OF. IT. Her name is Deja Foxx and she’s a prime example of America’s woke youth. At a town hall in Mesa, Arizona Foxx said to GOP Senator Jeff Flake, “I’m a 16-year-old from Tucson. I just want to state some facts. So, I’m a young woman and you’re a middle-aged man. I’m a person of color and you’re white. I come from a background of poverty and I didn’t always have parents to guide me through life. You come from privilege. So, I’m wondering, as a Planned Parenthood patient and someone who relies on Title X [a government program that provides reproduction care and education to clinics like Planned Parenthood] why it’s your right to take away my right to choose Planned Parenthood and to choose no-pay birth control, to access that?”

Flake chose to respond by going on for a full minute explaining that he is one of 11 children and paid for his own college to combat Foxx’s comment about coming from privilege. After moving on from that he said, “What I want is to make sure that everyone can realize the American dream that all of us have been successful at.” Basically, Flake did a political dance around Foxx’s very direct question and didn’t answer it at all. Watch the full encounter above or here.

The Spice Girls are reuniting. Dust off your Steve Madden platforms and blow up that inflatable glitter sofa because we’ve officially time traveled back to 1995. Last year, Scary, Baby, and Ginger Spice announced a reunion tour. But then Ginger got pregnant and Scary Spice’s then-husband caused a riff in the group. But now Ginger had her baby and Mel B has split with her husband and the band is back together – kind of. Victoria Beckham has said she would not join a reunion and Mel B says she won’t join without the full gang. Would a reunion tour still be as good without Sporty’s sports bra + track pant ensemble and Posh’s blasé attitude? TBD. Geri Halliwell told UK paper The Sun: “We’re not re-forming immediately, but in the near future.” (Photo via Getty)

What women-focused story are you following this week? Share with us on Twitter and don’t forget to check back next week for a fresh recap.

Cortney Clift
Cortney is the senior writer and special projects editor at Brit + Co. She typically covers topics related to women's issues, politics, and lifestyle. When she's not buried behind her computer you'll find her exploring New York City or planning her next big adventure.
Current Events