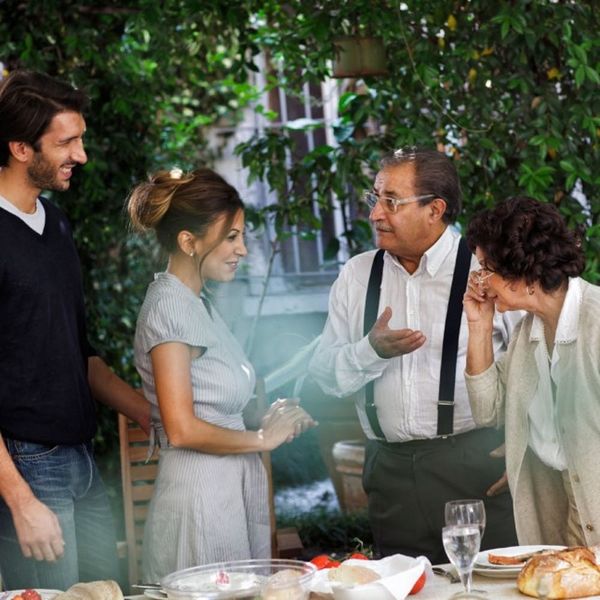 We’re old enough (or have at least come across enough jerks) to know that nice guys don’t actually finish last. In fact, guys who are moving past Guyland (when a boy becomes a man) and are more interested in having the DTR talk than breadcrumbing are super attractive. Your S.O.’s standup qualities are especially on display when he interacts with his mom, and if he’s as close with her as Ryan Gosling is with Meryl Streep, chances are he’s a keeper. But if their closeness quickly becomes super annoying, you probably have a mama’s boy on your hands. Here’s how to deal if his mama is causing you a little drama.

1. Don’t compete with his mom. Guys and moms have a tight, unspoken relationship. She’s literally been there for his whole life, and if you’re newly dating, it’s easy to feel the need to prove your worth against that. But those efforts will be in vain; competing with his mom is pointless, especially since your role in his life is so different than hers.

3. Compromise to avoid fighting about mom. Depending on geographic proximity, your boo will most likely want to spend a lot of time with his mom. They might even have standing times, like Sunday brunch or Friday night dinner, they always spend together. Rather than resent those dates, view their mother-son time as a sign of his maturity and commitment — traits that will hopefully be reflected if your relationship too.

4. Befriend his mom. Being the “other woman” in her son’s life will be easier if you and his mom have a working, healthy relationship. Especially if you and your boo have been together for a while, strengthening your bond with his mama will be beneficial for everyone.

5. Don’t try to be just like her. The old adage goes that guys marry girls who are just like their mom. While this is true sometimes, don’t shove a round peg into a square hole by trying to make that logic apply to you. Your guy might be close to his mom, but he’s also old enough to know a great woman — and relationship — when he sees it.

Are you dating a mama’s boy? Let us know @BritandCo!

Gabrielle Gresge
Gabrielle Gresge is a Chicago native and journalism student at the University of Missouri. While not chasing deadlines, she enjoys giving campus tours, exploring her new home, and missing her old one. She loves to write about these experiences in her own handwriting at gabriellegresge.wordpress.com.
Dating
Relationships
Dating love Relationship Advice
More From Relationships