11 Movies Everyone Will Be Talking About in December 2018 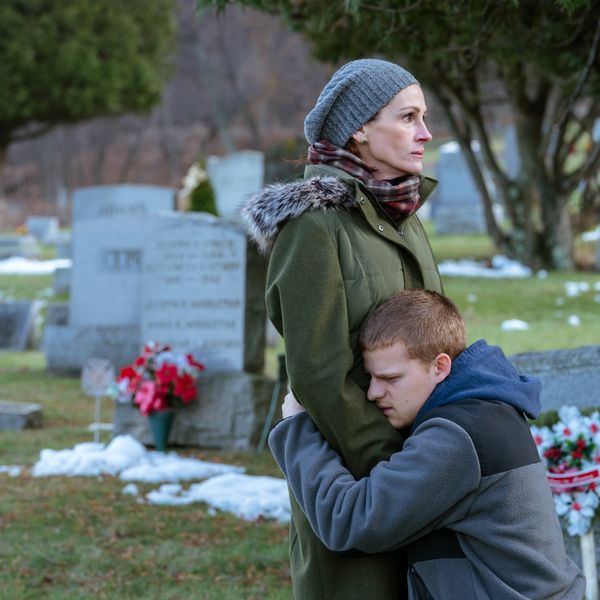 The holiday season is often filled with time-consuming tasks and family overload. If you're looking for a little quiet time out of the house that doesn't involve shopping, there are more than enough excellent movies — many of them considered 2019 Oscars frontrunners — opening throughout the month. Here are 11 movies we recommend checking out in theaters in December 2018. (Photos via Liam Daniel/Focus Features + Tatum Mangus/Annapurna Pictures + Mark Schafer/LD Ent./Roadside Attractions + Walt Disney Studios)

Mary Queen of Scots (December 7): Saoirse Ronan stars as the eponymous Mary, Queen of France, who, after becoming widowed at just 18 years old, returns to Scotland to reclaim her throne from her cousin, Queen Elizabeth I, played by Margot Robbie. The historical drama is December — and Oscar — gold. (Photo via Liam Daniel/Focus Features)

Ben Is Back (December 7): Julia Roberts stars in this heartbreaking and timely tale about the ways in which addiction affects whole families. Lucas Hedges stars as Ben, who arrives home on Christmas Eve morning after a trying period of addiction. A turbulent night unfolds as everyone struggles to not only help him stay sober, but even believe that he will. (Photo via Mark Schafer/LD Ent./Roadside Attractions)

Vox Lux (December 7): Natalie Portman plays Celeste, a child pop star who's trying to launch a comeback after a career-ruining scandal. Her past is never too far, though, and Celeste struggles to navigate her refound fame, motherhood, and her own demons. (Photo via Atsushi Nishijima/Neon)

If Beale Street Could Talk (December 14): Director Barry Jenkins follows up his 2017 Best Picture winner, Moonlight, with the story of an African-American woman fighting to help clear the name of her wrongly convicted husband before the birth of their child. (Photo via Tatum Mangus/Annapurna Pictures)

Mary Poppins Returns (December 19): Emily Blunt stars as the iconic nanny in a follow-up to the 1964 Disney classic. The film, which costars Lin-Manuel Miranda and Meryl Streep, looks every bit as perfect as the original and is sure to add some magic to your holiday season. (Just ask Blunt's husband, John Krasinski, who sobbed his way through an early screening of the movie.) (Photo via Walt Disney Studios)

Aquaman (December 21): Most blockbusters debut over the summer, but there are usually one or two that hit theaters around the holidays, and this year's offerings include the first title project for DC Comics' long-running Aquaman series. Jason Momoa plays the title character, alongside Nicole Kidman, Amber Heard, Patrick Wilson, and others. (Photo via Warner Bros. Pictures)

Bumblebee (December 21): The latest title in the updated Transformers franchise is another fun big-budget action film for the holidays. Hailee Steinfeld stars as Charlie, a teenager on the cusp of young adulthood in the late '80s who discovers the broken-down Bumblebee in a junk yard, only to find that it's no ordinary car. (Photo via Will McCoy/Paramount Pictures)

Second Act (December 21): Jennifer Lopez returns to big-screen rom-coms as a 40-year-old retail worker who schemes her way into a cushy corporate job she knows she deserves but has found impossible to achieve on paper. Leah Remini and Milo Ventimiglia also star. (Photo via Barry Wetcher/Motion Picture Artwork/STX Films)

Welcome to Marwen (December 21): In what's sure to be one of the most original and emotional films of the holiday season, Steve Carell stars as Mark Hogancamp, an assault survivor who constructs an elaborate mini village at his home to help with his recovery. Leslie Mann, Janelle Monaé, and more also appear in the Robert Zemeckis-directed film. (Photo via Universal Pictures/DreamWorks Pictures)

On the Basis of Sex (December 25): The Ruth Bader Ginsburg biopic, starring Felicity Jones as the inspiring US Supreme Court Justice, is a perfect pick for an empowering and inspiring Christmas Day watch. (Photo via Jonathan Wenk/Focus Features)

Destroyer (December 25): Nicole Kidman plays LAPD detective Erin Bell, who, as a young officer, was placed undercover with a California gang. Years later, as the gang leader re-emerges, she must revisit her time with the gang and finally confront her unsolved trauma. Tatiana Maslany and Scoot McNairy also star. (Photo via Sabrina Lantos/Annapurna Pictures)