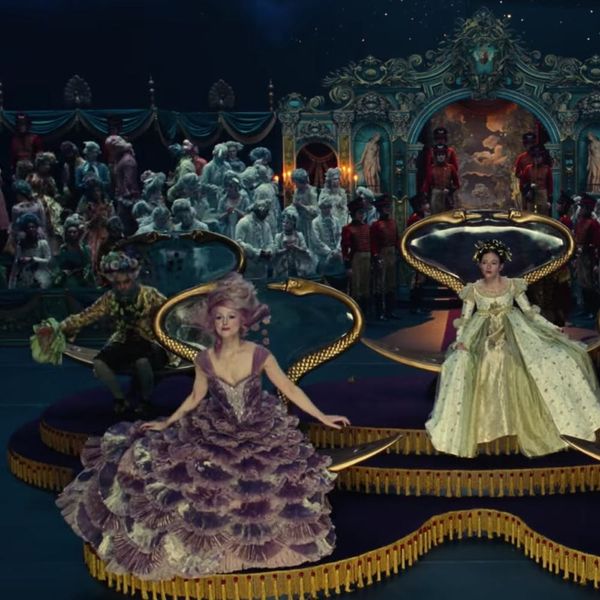 If A Christmas Story Live! failed to get you in a merry mood, maybe the first dream-like teaser trailer for The Nutcracker and the Four Realms will do the trick.

Directed by Lasse Hällstrom (who brought us Chocolat), the new film drew inspiration from both E.T.A. Hoffmann’s 1816 German fairytale The Nutcracker and the Mouse King and Tchaikovsky’s beloved ballet, creating a new take on the story that will charm lovers of the classic tale and new audiences alike.

In the teaser, we’re invited to a stunning holiday party, where we meet young Clara, played by Mackenzie Foy (AKA Renesmee in The Twilight Saga: Breaking Dawn films). Once inside the castle where the celebration is taking place, she meets up with her godfather, Drosselmeyer (Morgan Freeman), who reminds her that it’s Christmas Eve — a time of mystery and expectations. “Who knows what might happen?” he asks. And that’s where the magical story begins!

As Clara enjoys a party game and follows a golden thread that supposedly leads to a missing key, she suddenly finds herself in a wintry realm, where she encounters a soldier named Philip (Jayden Fowora-Knight). With him, she travels to the Land of Snowflakes and the Land of Flowers — but it’s in the Land of Sweets where she finds everyone’s favorite Sugar Plum Fairy (Keira Knightley).

From there, Clara and Philip must traverse the Fourth Realm, the domain of Mother Ginger (Helen Mirren). Between scenes of a crashing carousel, slashing swords, and a marching army, the trailer warns us: “The legend you know has a dark side.”

The Nutcracker and the Four Realms hits theaters on November 2, 2018.

What did you think about the first trailer for The Nutcracker and the Four Realms? Let us know @BritandCo!