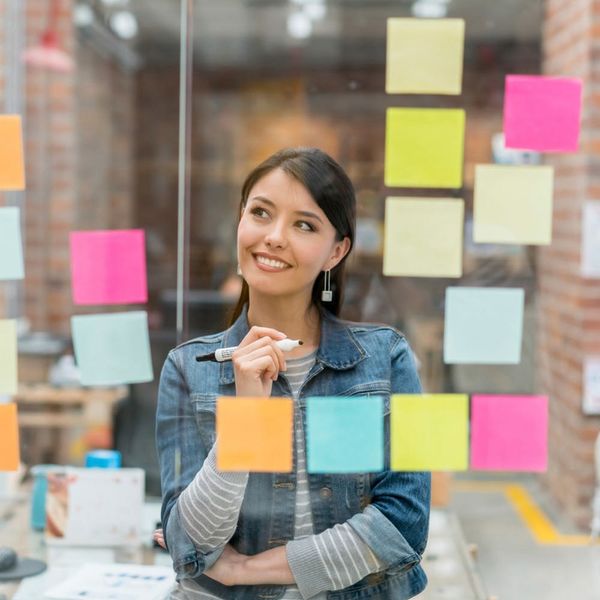 Easy does it: This is not the week to bring up controversial topics that may not sit well with everyone around the dinner table (especially your S.O.’s parents). Instead, kick back and relax by picking up a new fall hobby or practicing some zen yoga. Gear up for a weekend spent tailgating with these game-winning burger slide recipes and scroll down to see what the stars have in store for you in this week’s AstroStyle horoscope.

Emphasizing color-blocking and tonality, Summer Stripe is the perfect design for the graphic girl. #paintboxmani

Don’t let mercury in retrograde be your downfall — keep the petty arguments away by taking the high road, Virgo! Come back down to Earth after a week of flying emotions by treating yo’self to a long overdue mani or fresh ‘do. If you happen to cross paths with the Prince (or Princess) Charming of your dreams, take it as good karma for having to put up with a week of turmoil.

Read This: Get ready for date night by hitting the nail salon. Before you go, be sure to brush up on the latest nail trends and the only nail shape guide you’ll ever need.

Never say never, Libra! This is the week you reassess a previous friendship (an epic reunion may or may not be in the works), pick up where you left off on penning your first novel or make a vow to get back on the fitness bandwagon. As long as you make the first move, you won’t be disappointed with the outcome. Initiate a coffee date with your former BFF-turned-frenemy, touch basis with your editor or call up your fitness pals for a game-changing workout sesh.

Read This: Not sure where to start? THESE are the exercises to mix up your workout routine. (Photo via Getty)

The sweet outdoors are calling for you, Scorpio! Combat a case of cabin fever by seeking solace in Mother Nature. Between a glam-cation with your squad, a fist-pumping hike with your main squeeze and morning yoga in the park, there’s no shortage of active pastimes to keep the restlessness at bay. Some time spent sleeping under the stars is exactly what the doctor ordered.

Read This: This airstream makeover will give you major #wanderlust. Can you say adventure at your fingertips?

Take cover! With lingering deadlines and new assignments piling up, this week may be off to a tumultuous start. But, you CAN do it. Before your workaholic tendencies kick in, just breathe. Create a to-do list, re-evaluate due dates and pencil in a 15-minute brainstorming (or meditation) session for your personal sanity. Instead of rushing to the finish line only to come up short, reach out to your boss for an extension that could pay off big.

Read This: Stress begone! Check out these four tips for leaving work stress at the office for good. Phew. (Photo via Getty)

Running around like a crazy person on caffeine will take its toll on anyone, Cap! After a Friday spent celebrating a co-worker (or partying it up with a pal) until the wee hours of the morning, you’ll be ready to dial things down a bit. Clear your weekend plans, ‘cause a staycation spent at Chateau Capricorn is in your cards. Wake up to breakfast in bed with a side of Netflix before contemplating your next move.

Read This: ICYMI: This is when all your favorite shows are coming back for fall. Let the binge-watching commence! (Photo via Scream Queens/Fox)

Keeping secrets has never been your forte, and that’s not about to change now. Whether you’re thisclose to taking a job offer on the opposite coast, are contemplating a major breakup — or perhaps, it’s something as small as keeping your BFF’s surprise birthday party under wraps! — talking out your feelings with a confidante is your best move.

Read This: Change can be a good thing: Here are five secrets for making a successful career change. (Photo via Getty)

This is not the week to leave home without a hefty stack of calling cards — a money-making venture could arise when least expected. (Like when you’re waiting in line at the DMV or picking up groceries.) While the stars are aligned in your creativity sector, DO surround yourself with like-minded visionaries who could inspire you to launch your #sidehustle or join forces on a collaborative project down the road.

Read This: Get ready to pique your curiosity with these eight TED Talks that will totally change the way you think. Sign us up, please.

Tread carefully, Aries! Don’t assume you know the 411 about everything until you’ve done the research and fact-checking. Not only could you unintentionally offend a colleague or client, but your integrity could be put on the line. Upcoming travels in your near future will force you to brush up on a country’s customs well in advance.

Read This: Can’t we all just be friends? Check out these four tips for getting along with coworkers of ALL ages. (Photo via Getty)

Cue the competitive streak: If you have any say in the matter, you won’t be giving up without a fight. In the midst of cutthroat competition in the boardroom, remember that fair and square will always pay off in the end. When it comes to relationships, you’re not playing for any pity roses — you’re in it for the whole shebang (the Neil Lane engagement ring and all).

Read This: Not that we’re ring shopping or anything, but here are the 14 coolest, most extravagant celeb engagement rings we’ve ever seen. TBH, we want ’em all. (Photo via JB Lacroix/Getty)

Success is extra sweet when it’s the culmination of months of hard work and perseverance. This Friday’s full moon could mean BIG things for your career sector. Play your cards right and a well-deserved promotion or job offer could arise as early as the weekend. Just beware of any competitors (or a former nemesis) who could rain on your parade by swooping in and snatching up the gig at the last minute.

Read This: Girl, you’ve got this. Check out these 13 small business apps #girlboss entrepreneurs swear by.

Stay put in one place? Nah, not this jetsetter who’s got an iCal filled with adventure. Thankfully, you’ve got your fair share of exotic locations to choose from. Dedicate a Pinterest board to “places to go, people to see,” as you plan an early fall getaway to distant lands. Can’t afford to get away RN? Start saving those hard-earned dolla dolla bills and you’ll be backpacking through Europe before you know it.

Read This: It’s never too late to book the trip of a lifetime. Look no further than these eight ways to find out which study abroad program is right for you. (Photo via Getty)

Blame it on fashion week, but stylish Leos will find it downright impossible to resist a good splurge in the coming weeks. Unfortunately, your bank account will not be happy. Practice self-restraint by window shopping and creating a wish list of fall must-haves. Start saving now (rather than later) by putting forth a money-saving plan that won’t have you dealing with buyer’s remorse in the near future.

Read This: This just in: We’ve compiled 26 fashionable fall buys that won’t break the bank. *Adds everything to cart.*

Don’t forget to follow us on Pinterest for more daily inspiration, and check out your full AstroStyle horoscope!