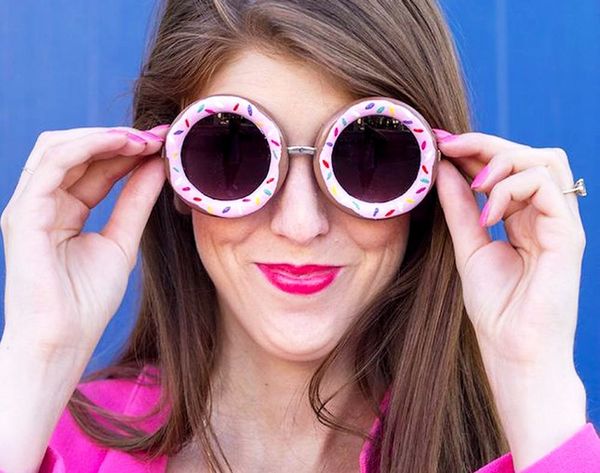 Step aside, macarons and Cronuts. Donuts are here to stay. It appears as though a donut frenzy has swept across the nation as everyone and their sister are going for seconds of these sugary sweet confections. Not that we can blame them, though. For the donut obsessed (um, everyone, right?), we’ve rounded up 22 unbelievable donut-inspired DIYs that even Homer Simpson would approve of.

3. Donut Bulletin Board: We already want that desk to be ours and the bulletin boards are just the sprinkle on the donut, really. (PS: pom pom pushpins FTW!) (via Paint the Gown Red)

4. DIY Donut Coasters: You know what they say, hidden beneath every great cocktail is a donut coaster. All the better to help you sip and savor… (via Hello Natural)

5. DIY Donut Floppy Hat: Blame it on our one-track donut mind, but when we see a straw floppy hat, we immediately think d-o-n-u-t. If it’s bubblegum pink and topped with sprinkles, we want it. (via Studio DIY)

6. DIY Donut Pillows: Give your apartment a little TLC with some chic donut throw pillows. They’re guaranteed to be an instant fave with you and your pals. (via Little Inspiration)

7. DIY Donut Sunglasses: Our new mantra: If it doesn’t move, donut-ify it. These sassy round donut-shaped frames (complete with sprinkles — duh!) are reserved for the most serious donut connoisseurs. (via Studio DIY)

8. Paper Donut Giftwrap: Fact: The best surprises come in pink donut gift boxes. All we can say is thank goodness for free printables and easy instructions. (via minieco)

9. Donut Garland: If you haven’t guessed by now, it’s not a party until it’s a donut party. (via Oh Happy Day)

10. Mini Donut Piñatas: Because one donut piñata isn’t enough, you might as well throw some mini ones into the mix as well. (via Little Inspiration)

11. Wood Donuts: Grab some wooden wheels, some paints and voilà… your very own donut props. (via Ikat Bag)

12. DIY Donut Rug: Upon entry into your humble abode, wipe your feet on this snazzy donut rug… and then treat yourself to a sprinkle-covered donut. It’s all in a day’s work. (via Hello Natural)

13. Simple Donut Pillow: “I have too many donut pillows,” said no one ever. If you ask us, the more, the merrier. (via A Beautiful Mess)

14. Donut Greeting Cards: With a pinch of glitter and some cardstock, your very own donut greeting card is just one DIY away. (via Damask Love)

15. Donut Gift Topper: In the spirit of giving, behold the only way to package your gifts this season — all wrapped up and topped with a donut. (via Oh Happy Day)

16. Candy Mini Donuts DIY: Oh-em-gee, these candy mini donuts take the cake for being the cutest of them all! No one will believe that they’re made of chocolate and peanut butter chips… could’ve fooled us. (via Paper & Stitch)

18. DIY Polymer Clay Donut Necklace: They DO exist… donut necklaces, that is. (Be honest, you’ve always secretly yearned for one.) Covered with multi-colored sprinkles and pink icing, you’ll never want to leave home without it! (via Lines Across)

19. DIY Donut Stools: Somebody quick! Open a donut shop and DIY these stools STAT. Would they not be perfect to sit upon as you contemplate your next donut order? (via Studio DIY)

20. Donut Crochet Card: You might never buy another card again after seeing this tutorial for a sweet crocheted greeting. (via One Sheepish Girl)

21. DIY Donut Balloons: Forget dunking, these ‘nuts are all about floating. (via Studio DIY)

22. DIY Felt Donut Ornament: Oh, the weather outside is frightful, but these ornaments are so delightful. Add: one mug of cocoa. (via UnusuallyLovely)

Which donut-inspired DIY will you be making first? Leave a comment below!