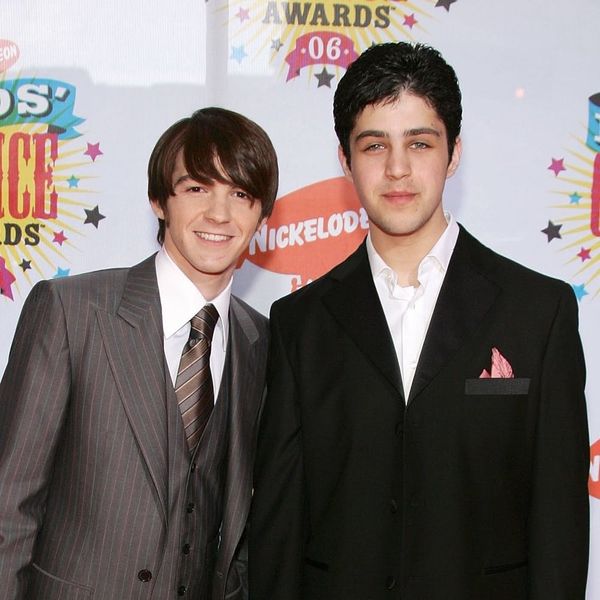 Drake Bell and Josh Peck once played stepbrothers on Nickelodeon’s Drake & Josh, so when they recently had a public falling out over Peck’s wedding guest list, our nostalgic hearts were broken. But at the 2017 MTV VMAs, the boys hugged it out, and we can’t help but feel that all is right with the world again.

Bell was upset that he didn’t get invited when Peck recently married longtime girlfriend Paige O’Brien, and he made it known by tweeting (and then deleting) the heartbreaking declaration that all ties between the two were officially cut.

Bell learned about his costar’s nuptials on social media, as attendees such as Peck’s Grandfathered costar John Stamos Instagrammed the night away. Stamos even addressed the drama in a cheeky Instagram post a couple of weeks after the wedding, posting a photo of himself and Peck with the caption, “I got invited to the wedding and I didn’t even want to go.” Ouch!

I got invited to the wedding and I didn't even want to go. #Honeymoon

Bell later told ET that he regretted his impulsive tweets and that he and Peck had spoken and cleared things up. Then, it happened: We got to see the two of them hug it out at the MTV VMAs. Both Bell and Peck posted the same photo of the tender embrace on Twitter, and Bell shared some extra goodies on his Instagram story, saying, “This is real. This is happening. The reunion is official. We’re back together!”

Fans immediately flooded Peck’s Twitter replies, making excuses for why their eyes were mysteriously watery at the sight of the TV brothers back together.

I'm not crying. Just sweating from my eyes.

Some took it upon themselves to complete Peck’s unfinished tweet for him: He captioned the photo of the hug, “Hug me…” and fans filled in the blank with the classic Drake & Josh line, “Hug me, brotha!”

We can’t deny how good it feels to see the bros back together — now, what about an *actual* Drake & Josh reunion?

Were you happy to see Drake & Josh back together again? Let us know @BritandCo!