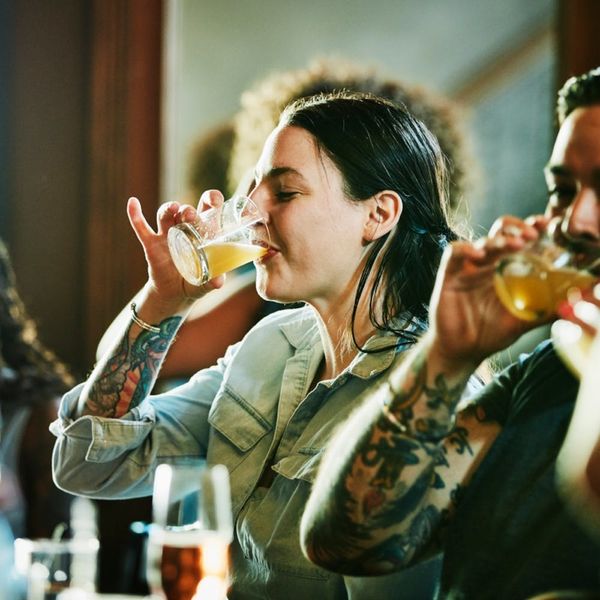 When you’re getting your party on or flirting at a bar, worrying about whether you can trust the people around you with your drink shouldn’t have to cross your mind. Unfortunately, spiking — the act of adding a drug and/or alcohol to someone’s drink or food without their knowledge — is alarmingly common. In a study by Alcohol.org, 56 percent of people who identified as women and 44 percent of those who identified as men had had a drink spiked, and over a third of them had experienced this more than once. And the danger isn’t only in clubs and bars: Most of the instances actually occurred at house parties. But that doesn’t mean you need to stop partying. Here’s what you need to know before your next night out.

1. It can be hard to tell that your drink has been spiked. This is especially true if you’re drinking alcohol and already feeling tipsy. “Many substances used for spiking are completely colorless, odorless, and tasteless,” explains Dr. Elisa Assadi, a family physician at Copeman Healthcare. “Most are central nervous system depressants, so they present similar symptoms to alcohol intoxication. You might feel off-balance and disoriented and experience blurry vision and/or loosened inhibitions. Many of these substances also cause loss of memory.” One way to tell the difference is noting how quickly those symptoms creep up on you: “Onset of symptoms with spiking is generally more rapid than when you’re just drinking alcohol,” Dr. Assadi says. “Try to weigh how much you’ve had to drink versus how drunk you actually feel, i.e., why do I feel this drunk when I’ve only had X number of drinks?” One factor that makes this even harder is that, as reported by 12 percent of spiking survivors in the survey, the spiking substance is often extra alcohol. Dr. Assadi warns that, when this is the case, you’ll take less notice of the taste the more alcohol you’re given, and you’ll feel the symptoms more suddenly.

2. If you suspect you’ve been spiked, get help immediately. There isn’t much you can do to stop the effects of a drug once it’s already started to work on you, says Dr. Darria Long Gillespie, a Harvard- and Yale-trained ER doctor. “There’s no ‘antidote’ for most of these drugs; instead, the person who has consumed them should be monitored closely until the effects wear off.” If you suspect that your drink — or your friend’s — has been spiked, the first thing to do is tell someone you know will have your back. “That can be a friend who’s out with you or someone you call,” Dr. Assadi suggests. “If possible, the next step would be to leave with someone you trust so that they can watch you throughout the night. If you are having moderate to severe symptoms such as drowsiness or decreased level of consciousness, or are concerned for any reason, definitely get to a hospital or health care center as soon as possible.” As we said, spiking can be hard to self-diagnose, but Dr. Assadi insists that uncertainty shouldn’t stop you seeking medical help. “Even if you’re not 100 percent sure your drink has been spiked, it’s never wrong to tell someone if you’re not feeling safe or are concerned about your well-being.”

3. The reason for spiking varies based on the victim’s gender. Melody Kasulis, the project manager at Alcohol.org who conducted this study, commented that for victims who identified as female, it appeared that sexual assault was the main motive behind drink spiking. “Fifty percent of [people who identified as] women who took our survey said a stranger or unidentified person slipped something in their drink, in the hope of making them physically vulnerable.” In comparison, while the drinks of a third of the survivors who identified as men were spiked by a stranger (presumably for the same reason), “pranking” was the most common reason of male-identified survivors being spiked. “Our data shows that more than 40 percent of [people who identify as] men are spiked by friends as a joke, often in college,” shares Kasulis. “It might not seem serious, but it’s dangerous and in some cases can lead to death. It paints a picture of a harmful culture where acts like spiking are considered harmless pranks because it’s between friends.”

4. Spiking presents additional health risks. Besides leaving you vulnerable to predatory people, drink spiking can be dangerous for your body. This is particularly true when sedatives are used, which was the case in a quarter of the incidents recorded in the study. Dr. Brian Cassmassi, a psychiatrist in Los Angeles, warns, “One common culprit is the sedative GHB (gamma-hydroxybutyrate.) The main danger comes in mixing it with alcohol, as the effects become cumulative: Both GHB and alcohol work on the same receptors in the brain, so the combo can cause increased slowing of nerve responses. The biggest concern is respiratory depression, i.e., slowed breathing rate. If you or your friend is taking shallow breaths, go to an emergency department.” Most people in the survey didn’t know what they had been drugged with; if this is the case, Dr. Assadi advises going to the hospital so you can be monitored. Dr. Cassmassi adds that unfortunately most date rape drugs are undetectable by standard tests in the ER, but at least the medical staff can keep an eye on your condition.

5. Look out for your friends. We would love to be able to stop people from spiking. But, given that it still happens, the best way to protect yourself and your friends is to look out for each other. In the study, 15 percent of people said that a friend intervened to get them to safety. “In the stories that our victims told,” Kasulis tells us, “a friend recognizing that they were extremely drunk made all the difference. That friend got them out of the social environment and home safely.” Dr. Crystal Bowe, a family practitioner based in Belmont, North Carolina, advises, “If your friend suddenly seems overly confused, sluggish, or disoriented, or they’re vomiting after one drink or no alcohol at all, be suspicious. And if you see someone hanging around and being overly friendly with the suddenly confused person, do not leave your friend alone.” Dr. Bowe recommends staying vigilant all night. “Never leave your drink unattended, and never take a ‘free’ drink from a stranger that you didn’t see the bartender make. Buying bottled beverages is another way to avoid having your drink spiked,” she adds. “Finally, have a plan for how you are leaving any event where you are drinking, and stick to it. Leave with the friend you came with: Friends don’t leave friends behind!” Squad goals to the rescue.

Tell us about the friends you know are looking out for you at BritandCo.

Natasha Lavender
Natasha Lavender is a Londoner living in Chicago, and is fluent in British and American. She writes about pop culture, health, lifestyle, feminism, fashion, and interviews with interesting people, and has previously worked for Good Housekeeping magazine, Buzzfeed, and Hello Giggles. She loves podcasts, running, reading, dogs and cats equally, and peanut butter anything.
Drink
Health
Drink Healthy Living Womens Health
More From Health