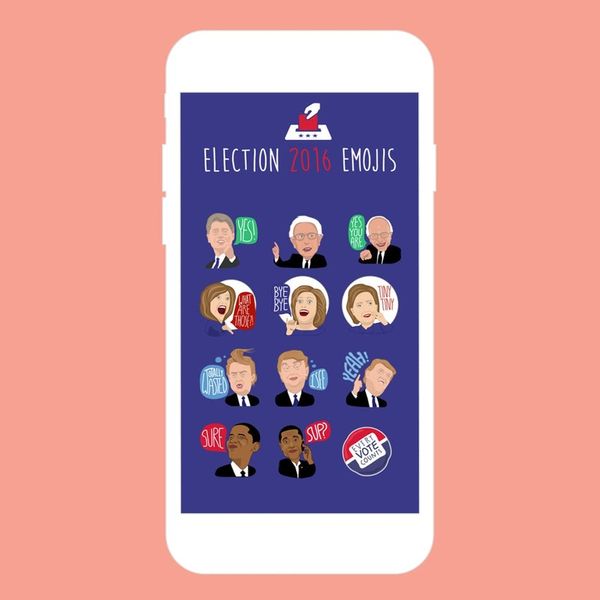 2016 has been one of the most tech-friendly elections in American history (seriously, you can register to vote, watch the debates and donate to campaigns just by logging onto Twitter). Whether you’re still undecided or just want to stay up-to-date in the days leading up to electing a new POTUS, here are 10 cool apps to download before your election results viewing party.

2. America First: Donald J. Trump’s presidential campaign also created an app targeting potential voters. Trump supporters (or just those who want to be flies on the wall) can comment, RSVP to events and check in.

3. We the People: Let’s be real, discussing sensitive and controversial issues with your high-school buds and work acquaintances might not be the smartest way to talk politics. In this cool free app, you can anonymously discuss the election with other app users — heck, you can even see a live map of how the people around you are leaning politically.

4. Voter: Swiping right won’t find you a hubby on this fun app… it’ll find you your next POTUS. That’s right, just like popular dating apps, Voter analyzes public stances, voting records and speeches to create easy-to-understand questions that will find you your ideal candidate by simply swiping left or right.

5. Hear My Voice: Sometimes it can be hard to find non-partisan news sources. On this neutral app, you can learn about important issues with side-by-side political comparisons on a variety of hot button issues.

6. Politico: One of the most popular websites for election and political news, Politico’s app is definitely a must-download for election coverage. Plus, they update several times every day, so you’ll always be in the loop on the latest Trump and Clinton-isms.

7. Election 2016 Emojis: For the price of a cheap cup of coffee, invest in a handful of hilarious emoji featuring some of 2016’s most mind-bending political moments with this LOL-inducing app. Seriously, when DON’T you need an emoji of Hillary Clinton saying “bye bye?”

8. PollTracker: Dataheads will love this info-packed app produced by TPM Media. Featuring up-to-the-minute data and polls on topics like presidential approval and same-sex marriage, it’s perfect for the gal who’s voting by the numbers.

9. AllPolitics: If you’re looking for one place to find a ton of political news from different sources, try this free app. Curating content from sources like Politico, Fox, MSNBC and talk radio shows, it’s a one-stop-shop for election updates and political stories.

10. Tinder: Potentially taking a cue from Voter, Tinder has just launched an initiative with Rock the Vote to encourage its users to better understand the presidential candidates’ policies. Quizzing users on 16 issues, the app will let users know which candidate best suits their views and offer helpful information about how and where to cast their vote.

How are you getting ready for election night? Tweet us by mentioning @BritandCo.

Ashley Macey
Ashley Macey is a lifestyle freelance writer who loves all things fitness, wellness, and creativity. When she's not exploring her home in the Pacific Northwest with her dog Max, you'll probably find her curled up with a good book and some hot tea. Follow her daily jaunts on Twitter.
Android Apps
Tech
Android Apps Apps iPhone Politics Tech News
More From Tech